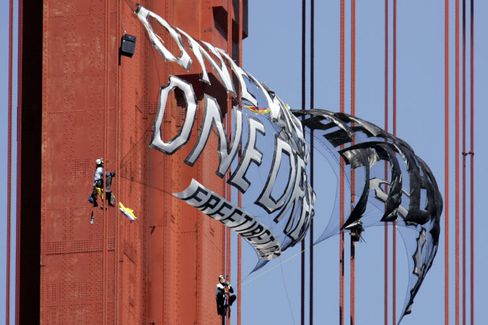 Pro-tibet demonstrators have unfurled banners on the arch of the Golden Gate Bridge.

Authorities in San Francisco, the next destination for the troubled Olympic torch relay, are gearing up for the same kind of pro-Tibet protests that disrupted the relays in London and Paris in recent days.

Signs of protest are already visible after three people climbed the Golden Gate Bridge on Monday to unfurl a Tibetan flag and two protest banners. Billboards protesting China's human rights record have already gone up along major streets in the city and groups including Amnesty International will be holding rallies. Speakers will include South African cleric Desmond Tutu and Hollywood actor Richard Gere, a vocal supporter of Tibetan independence.

The torch run itself is due to take place on Wednesday and police are throwing a tight security blanket over the torch route in San Francisco following Monday's relay in Paris which was interrupted by hundreds of campaigners protesting China's human rights record. Officials in the French capital were forced to douse the torch several times before the planned procession was halted.

Similar scuffles were seen in London on Sunday, where more than 30 arrests were made after rowdy protests.

German media commentators say the protests prove that sport and politics cannot be kept apart if a country with a human rights record as controversial as China's tries to hijack a sporting event for propaganda purposes.

"Ever since China was awarded the Olympic Games and pursued them as a national prestige project, the flame no longer stands for fairness and peace. It now also symbolizes a repressive regime which battles ambitions for autonomy like in Tibet, which hurts human rights and suppresses dissenting opinions.

"That is why demonstrators in London and Paris hurled themselves at the runners bearing the torch around the globe. They want to extinguish it. Beijing is seething with anger and talking of 'sabotage.' It wanted to use the Olympic Games as a stage to present itself in the best light. Now it must look on dumbfounded as it loses control over the organization of the spectacle outside its own borders. The party officials are helplessly watching the protests in Paris and London that are likely to be repeated in San Francisco and Delhi. The torch relay is turning into a political symbol, the damage to the image is increasing with every kilometer."

"The pressure on China is mounting. But so far it appears incapable of finding a way to deal with this challenge."

"The Games this year have already produced a new Olympic discipline: torch extinguishing.

"The Olympic flame is intended to demonstrate peace and solidarity among the peoples. In ancient times lighting the torch marked the period during which weapons were put down during the Games and acts of war were forbidden. The fact that it was the Nazis who reintroduced it in 1936 shows how susceptible such a symbolic act is to propaganda. China's dictatorship can't be compared with Hitler's regime. But one has to welcome the fact that demonstrators are now preventing the Communists in Beijing from using the torch relay to present themselves like Leni Riefenstahl did, with terrifying mastery, in her propaganda film 'Olympia.' The torch relay was intended as a triumph but has become a gauntlet for the Chinese -- and given their stubborn attitude in the Tibetan conflict, they only have themselves to blame."

"Even (International Olympic Committee President) Jacques Rogge, whose reticence so far has left one unsure whether it amounts to a mockery of Tibet or Olympian naiveté, can no longer deny that sport and politics do belong together when states want to use his help to portray their version of peace. The opponents of this spectacle have turned torch extinguishing into a sport."