Some venerable German brands have already fallen victim to the financial crisis. In recent weeks, porcelain maker Rosenthal, underwear manufacturer Schiesser, model train maker Märklin and department store chain Hertie have all filed for bankruptcy. Now the future of the auto company Opel is on the line, prompting the mass circulation daily Bild to pose the anxious question that many Germans must be asking themselves: "Is 'Made in Germany' Going Kaputt?" 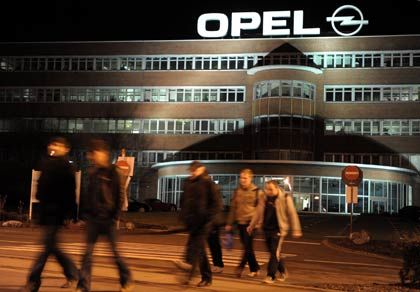 Opel workers at the carmakers' plant in Bochum face a deeply uncertain future.

Politicians are scrambling to mount a rescue for Opel, which faces heavy redundancies and even plant closures in the course of a restructuring announced overnight by its parent company General Motors. Angela Merkel's government hasn't ruled out going as far as nationalizing Opel to keep it afloat. Other options are providing billions of euros in state loan guarantees or direct subsidies similar to the bailouts Berlin has granted Germany's financial sector.

GM added urgency to the debate overnight by announcing it plans to reduce its global workforce by 47,000 jobs this year and to cut five additional US plants by 2012. It also said it needed up to $30 billion in government aid and that it would run out of cash as soon as March unless it gets fresh state funds.

That has sparked fears of insolvency at Opel, which employs 26,000 workers at four German plants in Rüsselsheim, Bochum, Kaiserslautern and Eisenach. The potential impact of cuts is even greater if auto components suppliers are included.

So far, GM appears not to have made a decision on the future of Opel. GM CEO Rick Wagoner said the group was talking to the German government and other parties and reviewing all options. He said the restructing involved the closure or sale of plants in Europe, but he didn't give details about whether and to what extent Opel and GM's other European units Vauxhall of Britain and Saab of Sweden would be affected.

Now the German federal government, along with governments of those states home to Opel factories, are in a quandary. There's a general election in September, and it would be political suicide to refuse government assistance to car workers months after bailing out the financial sector with hundreds of billions inf state aid.

The problem, say German media commentators, is that helping out Opel will open a floodgate of demands for state aid from other German manufacturers struggling with the economic downturn. And the state can't afford to bail out the whole economy. Besides, some commentators say, Opel has made some key management mistakes in recent years, which partly explains why it is among the first big European auto manufacturers to get into trouble.

"It's doubtful that saving Opel with taxpayers' money would be in the public interest. The billions of euros in state aid will be applauded at Opel's sites in Bochum, Eisenach or Rüsselsheim -- but most Germans are unlikely to be prepared to pay higher taxes to rescue one industrial company after another. If you help Opel, you're also going to have to help Volkswagen, BMW and Daimler. And if you spend billions rescuing the carmakers, you're also going to have to bail out the big parts suppliers and the engineering firms that deliver the production lines for the auto industry."

"The debate shows the dilemma faced by the federal and regional governments in trying to rescue Opel. They're trying to portray Opel as a special case because a supposedly healthy company is being pulled down by its US parent company. But Opel is anything but a special case. If it's rescued there will immediately be questions about which other companies also deserve state aid."

"So far, virtually every politician has declined to answer those questions. That turns the rescue of individual companies -- which fundamentally isn't the job of the governments -- into a matter of gut feeling. If influential politicians believe they can win votes by paying out government aid, the chances of a company's getting rescued improve. But that's got to be the worst criterion for apportioning state aid."

"In this country there's a very broad coalition forming in favor of protecting jobs. It extends from left-wing trade unions to conservative regional governments. And with general elections in just seven months, Berlin too is unlikely to oppose moves to help the carmaker with billions of euros."

"What party would have the courage to enter an election campaign after having refused to protect jobs at (Opel) plants in Bochum and Rüsselsheim while having spent billions on bailing out ailing banks? But one should nevertheless warn Berlin and the rest of the country against helping out the company."

"That's because Opel is almost as sick as GM. It would be a miracle if Opel were to be resurrected from the ruins of the (GM) empire. Opel is synonymous with years of strategic errors and poor brand management, with a thinned-out distribution network and highly complicated corporate structures. That's why Opel has such a poor hand to deal in the European automaking game. It's the worst player, and that's why it is rightly the first to be affected in the crisis."

"It was necessary for the state to shell out billions to rescue banks to prevent a collapse of the economic system. But rescuing Opel could cause an avalanche that could tear politicians down with it. Where and when should the state draw the line with life-saving measures? Germany and the world are in a deep recession, and it doesn't look as if things will improve anytime soon. The bleak weeks ahead of us will pose a major challenge for governments. The market economic order will only remain able to function if it allows corporate collapses."

"It's a bitter message to the Opel employees. But it would be dishonest to keep silent on the truth. Billions here or there, Opel will find it hard to stay alive."