Germany's parliament feels ignored. Until now, the Bundestag has had very little influence on decisions made by Chancellor Angela Merkel and her government regarding bailout packages for heavily indebted euro-zone states. But with expanded powers having been granted to the euro backstop fund -- known as the European Financial Security Facility or EFSF -- at a European Union summit in July, German parliamentarians also want a greater say.

On Wednesday, Merkel's cabinet agreed on the law necessary to expand the EFSF, a change which must be agreed to by all euro-zone governments. But the question as to how much influence the German Bundestag might ultimately have over EFSF bailouts was left unanswered, pending ongoing negotiations. Given the threat of a conservative revolt, Merkel has proven open to a compromise. Too many parliamentary defections from her Christian Democrats (CDU) and its Bavarian sister party, the Christian Social Union, in the late September vote could topple her government.

But on Thursday, several struck a more cautionary note, including German Finance Minister Wolfgang Schäuble, a leading member of the CDU. The EFSF, he said, must be able to "act quickly." As such, he said that the parliament must act responsibly with any influence it is granted.

Several economists went even further. "In a situation of market panic, the EFSF has to act quickly," Holger Schmieding, chief economist of Berenberg Bank, told the Financial Times Deutschland. "It could happen overnight or on a weekend." Guntram Wolff of the Brussels-based think tank Bruegel agreed. Parliamentary approval "must not take too long." But delays are inevitable, he told the paper, should the parliaments in all 17 euro-zone member countries be granted a say.

The changes to the EFSF agreed by European heads of state and government involve drastically increasing its lending power and enabling it to recapitalize endangered banks via national governments. It also allows the EFSF to buy up sovereign bonds of indebted euro-zone states as a way to provide interest rate relief -- a duty that has been fulfilled by the European Central Bank until now. Germany's share of EFSF contributions and guarantees is €211 billion.

The fight over the Bundestag's eventual role in EFSF decisions is not likely to end soon. Several parliamentarians, including members of her own conservatives, have threatened to veto the bill without significant concessions by the Merkel government. In a Thursday interview with the daily Augsburger Allgemeine, CSU parliamentarian Peter Gauweiler said: "Democracy does not mean that a representative body gets just a bit of say like a student body or a PTA group. Rather, it means that the people govern through the parliament."

German commentators on Thursday take a look at the issue of parliamentary influence within the EFSF.

"Elected parliamentarians are the democratic element in a confusing game which involves the EU heads of government (and usually just a few of them) showing a preference for saving the euro or the European project only among themselves -- in a place, in other words, where the democratic air has become so thin that one can hardly breathe. It is a place where tiresome parliamentary processes are considered bothersome -- because time is always pressing and the challenges are always huge."

"Nowhere is the principle of parliamentary responsibility more obvious than with the euro backstop. Germany is responsible for €211 billion in the new, broadened EFSF -- the equivalent of almost an entire year's budget. Losing that money in one fell swoop is, of course, merely a theoretical exercise. But the numbers show that the ante is essentially the finances available to future generations. The right to control the budget is often described as the kingly right of the parliament, but it has nothing to do with monarchy and everything to do with democracy. Dividing up the money determines how social a state is, what educational opportunities it offers and what it can provide families. If the money is gone, then the right to control the budget is little more than letters in the constitution."

"That is why it is correct to reserve the right for the parliament to decide on billions of euros worth of guarantees for the common currency ... One might elect to stabilize ailing countries with billion-euro bailouts. But a stable EU can only be ensured when one takes the wishes of the people seriously."

"'No taxation without representation' was the battle cry of the American revolutionaries who were fighting against decisions levied against them by England. Recently, the impression has grown that this 'prerogative' of the parliament in Germany is in danger. Bundestag President Norbert Lambert has said that laws can't just be created by the chancellor's cabinet. The federal parliament must also be involved. Nor is it acceptable for the chancellor's cabinet to put parliament under unseemly pressure -- neither on grounds of urgency nor alleged inherent necessity. The example here is the management of the euro crisis including, among other things, the creation of ever more rescue funds with which euro zone governments are seeking to pacify the markets. Lammert was correct -- and not only because the sums in question are large enough to compete with some of the biggest portions of the German budget determined by parliament."

"It would serve parliament best to take this task seriously. Because the Bundestag isn't just pressured by the executive above. It will also feel the displeasure 'from below' because the parties -- and ultimately the voters -- have the impression that parliament isn't discussing important issues in a deep and fundamental way. Parliaments aren't just printing presses for new laws. They also have a role in educating society. If they no longer fulfil that role, then will quickly forfeit their legitimacy."

"Those attempting to save the euro are, in truth, reacting to market forces and the needs of indebted countries. The German parliament now wants to change that by having an effective say in the approval of billion-euro aid packages. That is naïve. It could very well be that the representatives will soon receive a formal right of co-determination within the framework of a nicely worded compromise. But in practice, it will be worth nothing. Because every delay at the hands of German parliamentarians would be sand in the works of the EU bailout machinery. The markets would only become more nervous and the result would be that interest rates on state bonds issued by debt-stricken nations would climb further. As long as the Bundestag supports Merkel's policy of saving the euro, then the parliamentarians have no choice: They can only rubberstamp the package placed before them and then return to powerlessness. Saving the euro remains an intergovernmental project."

In an editorial in the Frankfurter Allgemeine Zeitung, former European Parliament President Hans-Gert Pöttering focuses on the need for further European integration:

"Consolidation of state finances in the entire EU, the introduction of the debt brake in all EU member states, the presentation of national budgets to the European Commission, the strengthening of the European Court of Justice's ability to apply sanctions when countries do not adhere to the criteria agreed for the common currency -- these are the necessary steps that need to be taken now. They are a precondition for establishing an effective and shared EU management of state debt (euro bonds) and for the kind of European finance minister that European Central Bank President Jean-Claude Trichet has called for. It would also be best if the ECB's independence were further strengthened as well during that search for better rules of a political union, so that its decisions are not limited by commentary and political influence."

"We also need a debate led with hearts and minds over a deepening of European unity that extends far beyond the discussion on debt and the euro. We need to think in more European ways than we ever have before. The compass for that discussion should be the 500 million people of Europe who are connected by values -- particularly those of humanity, freedom and democracy, peace and law as well as principles of solidarity and subsidiarity."

"This orientation of the discussion will best serve not only the long-term interests of Germany, but also the other EU countries. After World War II, Europeans comprised 22 percent of the global population (today that figure is 12 percent), with the German share falling from 2.7 percent to 2.3. If you go by demographic predictions, by 2050, Europeans will represent 7 percent of the global population, with Germany a mere 0.7 percent. Without a joint European Union, how else will we pursue and defend our values and interests in global politics, economics and culture?" 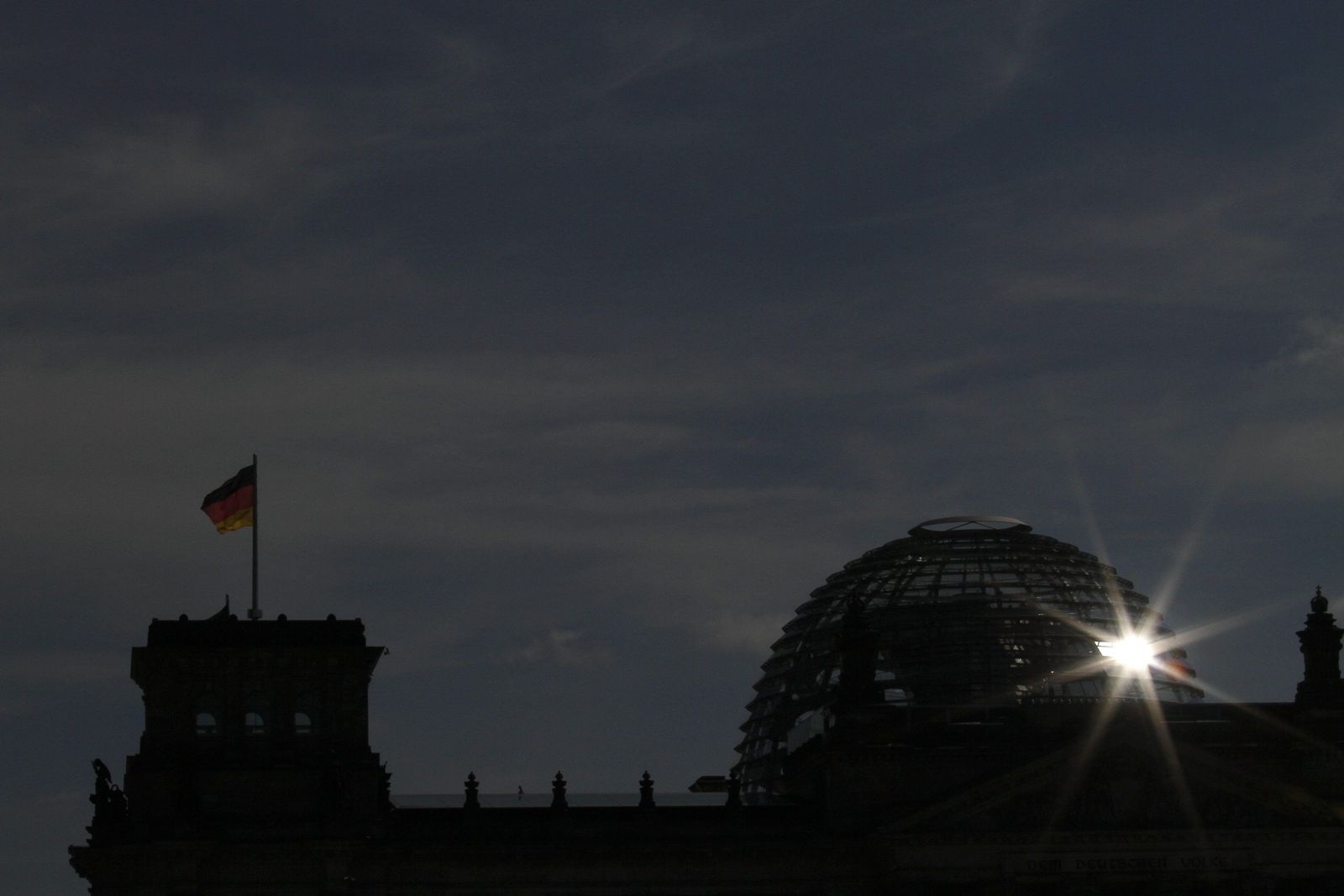 Germany's parliament wants more of a say in the euro crisis.