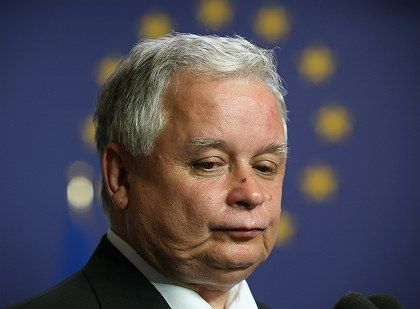 There was a sharp intake of breath across Europe on Thursday after Poland broke the ultimate taboo -- and mentioned the war. On the eve of a crucial European Union summit, hosted by Germany, Polish Prime Minister Jaroslaw Kaczynski brought up his country's treatment at the hands of Nazi Germany during World War II.

Kaczynski told Polish radio on Tuesday that his objection to a proposed new voting formula in the European Union went back to the country's suffering under German occupation. "We are merely demanding what was taken from us," he said. "If Poland had not had to live through the years of 1939-45, Poland would be today looking at the demographics of a country of 66 million." Poland's current population is 38 million. Significantly, Germany is current EU president and Chancellor Angela Merkel has been trying to win over the intransigent Poles to the new European treaty, which is currently being negotiated in Brussels by all 27 member states.

The Poles have been holding out on agreeing to a new EU voting system, one that they argue would see bigger countries, in particular Germany, have a greater say in EU affairs. Warsaw has come up with an alternative "square root" system, but it is only backed up by the Czech Republic in its attempt to renegotiate the voting system.

There was shocked reaction to the Poles dredging up Germany's Nazi past at such a delicate stage in EU relations. Danish Prime Minister Anders Fogh Rasmussen said it was an unfortunate statement and a distraction. "It's an absurd idea to base today's decisions on a very tragic history," he said. Estonia's Prime Minister Andrus Ansip said Europe could not continue "living in the past."

Hans-Gert Pöttering, current president of the European Parliament, and a German conservative, said he found Kaczynski's words "very painful." "Throughout Europe since 1989 there has been a great deal of goodwill shown, especially to Poland," he said. "That is why as a German, and as a European, it now hurts me very deeply to hear such comments." Luxembourg's Prime Minister Jean-Claude Juncker called on the Kaczynskis to "jump into the present. In an interview with Financial Times Deutschland on Thursday he said: You will not be happy in the long-run if you are always looking in the rearview mirror.

The Czech Republic is slightly more sympathetic to the Polish position. "Poland right now is in dispute with Russia as well as Germany. That's nothing new if you know history," Czech Deputy Prime Minister Aleksandr Vondra said this week.

In the German press, reactions to the Polish comments varied from shock and anger, to bemusement and sympathy.

"Can anyone accuse the Germans, two generations after the war, of not having faced up to their responsibility? Chancellors and presidents have asked for forgiveness, Poland's fate is a part of the policy of remembrance, and is mentioned in commemoration ceremonies, in schools and in the media."

"And the Germans, following a long internal struggle, finally accepted the transfer of the lands east of the Oder-Neisse line as reparation for Poland. And they paved the way for Poland to join the EU, against the opposition of most other member states, where the country is now the biggest net recipient, and will continue for many years to receive German tax revenues. Kaczynski has now shown how little he appreciates the German efforts at reconciliation and making amends."

"Jaroslaw Kaczynski has gambled away the remains of his political credit with his off-key historical reference to the Polish victims in World War II, who he says should be included in the weighting of votes in the EU. Notorious German haters in his own country will be applauding him for such comments. The rest of Europe turns away in horror."

"Poland suffered terribly from Nazi terror. No one can deny that. But many other Europe countries also suffered. The European Union is based on the principle of reconciliation. It made reliable partners, and in some cases friends, out of old enemies. No other country would have thought to suddenly settle old accounts with the German EU presidency, 62 years after the end of the war, or to bring up the issue of 6 million dead in the negotiations for a treaty reform. This behavior is not only in bad taste, but it is perfidious and exposes the Kaczynski brothers for what they are: merciless populists."

"If one looks to Brussels one has the impression that this summit is about nothing less than life and death  but it's not, even if the Polish government suggests this and strikes a markedly false note, by weakly attempting to demographically count their own World War II dead, thus belying the European idea of cooperation and rapprochement ... ."

"The new EU member states speak a different language. Countries like Poland, Hungary and the Czech Republic are still trapped in transformation and introspection, and to them the European structures are like a corset, and like a rebellious teenager they dont want to follow the rules of the house."

"For the Kaczynskis and their countrymen there was no new beginning in 1945. ... A country that was on the brink of civil war fell under the Soviet yoke, but the Polish desire for freedom was never broken. And the fierce courage that was fired up during the Warsaw uprising against the Nazi occupation in 1944, came back to life in 1980 with the founding of the independent Solidarity trade union. In the end, despite martial law and all that went with it, the Berlin Wall fell and the Soviet Union broke apart. Without the courage of the Poles, there would never have been a new Europe, the constitution of which is being fought over so fiercely today."

"These facts could have been emphasized, for instance, in an historical preamble to the European constitution -- something that could have possibly avoided the current conflict. The Poles are not just concerned with the specific voting rights, and that they will lose influence in the future (which is difficult to deny), but -- perhaps above all -- about the recognition of their services to history."