The Srebrenica massacre is considered the worst atrocity of the 1990s Balkan civil wars, and the only act of genocide in Europe since the Holocaust. Bosnian Serb militias, led by General Ratko Mladic and backed by Serbian President Slobodan Milosevic in Belgrade, separated women from men in the spa town of Srebrenica in July 1995 and killed an estimated 8,000 Bosnian Muslim men and boys. "They stripped all the male Muslim prisoners, military and civilian," according to the International Criminal Tribunal for the former Yugoslavia (ICTY), which ruled the massacre a genocide in 2004, "and deliberately and methodically killed them solely on the basis of their identity."

On Wednesday, the Serbian government offered a full state apology for the massacre. The statement is meant to rehabilitate the small nation's standing in Europe and separate the government of President Boris Tadic from the atrocities of the Milosevic era. Milosevic left office in 2000 and died in a Hague detention center in 2006; Tadic came to power in 2004, and was re-elected in 2008.

As a political gesture, the statement represents a victory for Tadic, who worked into the early hours of Wednesday morning to ensure that a majority in parliament would pass the statement. When it was over, Tadic said the gesture was overdue. "I think this declaration is a major contribution to the democratization of Serbia and to regional reconciliation," he told parliament. "I'm sorry I have not adopted it in previous years."

But will it be enough? German commentators on Thursday seem to agree with Foreign Minister Guido Westerwelle, who said on Wednesday, "I welcome the resolution passed by the Serbian parliament. Serbian politics has taken a courageous first step towards facing up to its own past" -- with an emphasis on "first step."

"This acknowledgement is an important step for the young nation, toward arranging a stance on its own history as well as its neighbors and the European Union. But there are many more steps to be taken."

"The resolution is not as clear in its choice of words as a legal complaint, not as moving as (former German Chancellor) Willy Brandt's silent kneeling gesture before the memorial to the Warsaw Ghetto Uprising. The word 'genocide' was avoided. So was the name of former Serbian President Slobodan Milosevic, who because of this massacre -- and many other crimes -- was brought before the International Court of Justice in The Hague. He died before a verdict could be announced. And responsibility for Srebrenica was not explicitly accepted (in the new declaration). The text only says the massacre was not stopped. It sounds as if the Serbian state now wants to distance itself from the actions of the Bosnian Serbs -- although in the '90s it supported them."

"Serbia can't be allowed to think this resolution fulfils its entire duty. Some key figures from that era still have links to the apparatus of power. And the war criminal Ratko Mladic, sought by The Hague, who organized the Srebrenica massacre, may yet be hiding in Serbia. As long as the government can't deliver him, it will remain under suspicion of looking the other way."

"The massacre was the result of a war initiated and led by a militaristic and paranoid clique surrounding Serbian leader Slobodan Milosevic. Even 15 years after the fact it isn't possible to find a majority of votes in the Belgrade parliament to call genocide by its name. The Srebrenica resolution avoids the word, which renders the document worthless in the eyes of survivors."

"But it is not worthless. The document also sends a signal that the new Serbia no longer stands behind the murderers. In considering its recent past, Serbia has taken a new and significant step. So far the new government has seemed content with holding war criminals at arm's length. This resolution has brought a serious discussion about guilt and responsibility, at last, to Serbian society as a whole."

"It would have been truly brave of the legislators, in the name of Serbia, to disavow the nefarious tendency in these debates over sin and guilt to back-pedal, mollify, and say 'Yes, but'"

"It's true that Serbs were also victims of violence; not many people know that several dozen Serbs were killed by Bosnian Muslim (or Bosniak) fighters from Srebrenica who went plundering through the village of Kravica during Orthodox Christmas celebrations in 1993. It's also true there were very few reports of crimes against Serbs at the start of the Yugoslavian civil wars, and that experience from World War II gave Serbs a justified fear of living in a new nation as an ethnic minority. But there was a reason for these gaps in public memory: The (Serbian) fear of being victimized led quickly to monstrous Serbian crimes."

"Srebrenica was the last, most terrible victory by Ratko Mladic. He ordered the murder of 8,000 Muslim boys and men after the tide of the war had turned against him. When he marched into the enclave he said the conquest was a gift to the Serbian people. The recipients are still suffering from his generosity. Serbs will not overcome the general's bloody gift until they confront the recent past -- without ifs, without buts."

"President Boris Tadic's Democratic Party, as senior partner in the ruling coalition, has managed what's currently feasible in Serbia, nothing more: a half-hearted apology. What's missing is a credible remorse, a willingness to call the massacre a monstrous crime, even if it avoids specific reference to what it actually was, namely genocide. The statement does work, barely, as a signal that Serbia no longer wants to excuse itself from general European values. The Srebrenica declaration, as it's being called, will not accelerate the country's re-integration into Europe; but it also won't hold it back."

"The political interests that came to power during the Balkan wars of the 1990s have been de facto rehabilitated. The Socialist Party of Serbia, founded by Milosevic, is now a coalition partner in Serbia's pro-European government. Milosevic's press officer is now Serbia's interior minister."

"The Srebrenica declaration was too much for some people, too little for others. But the political theater in Belgrade has almost nothing to do with true reconciliation." 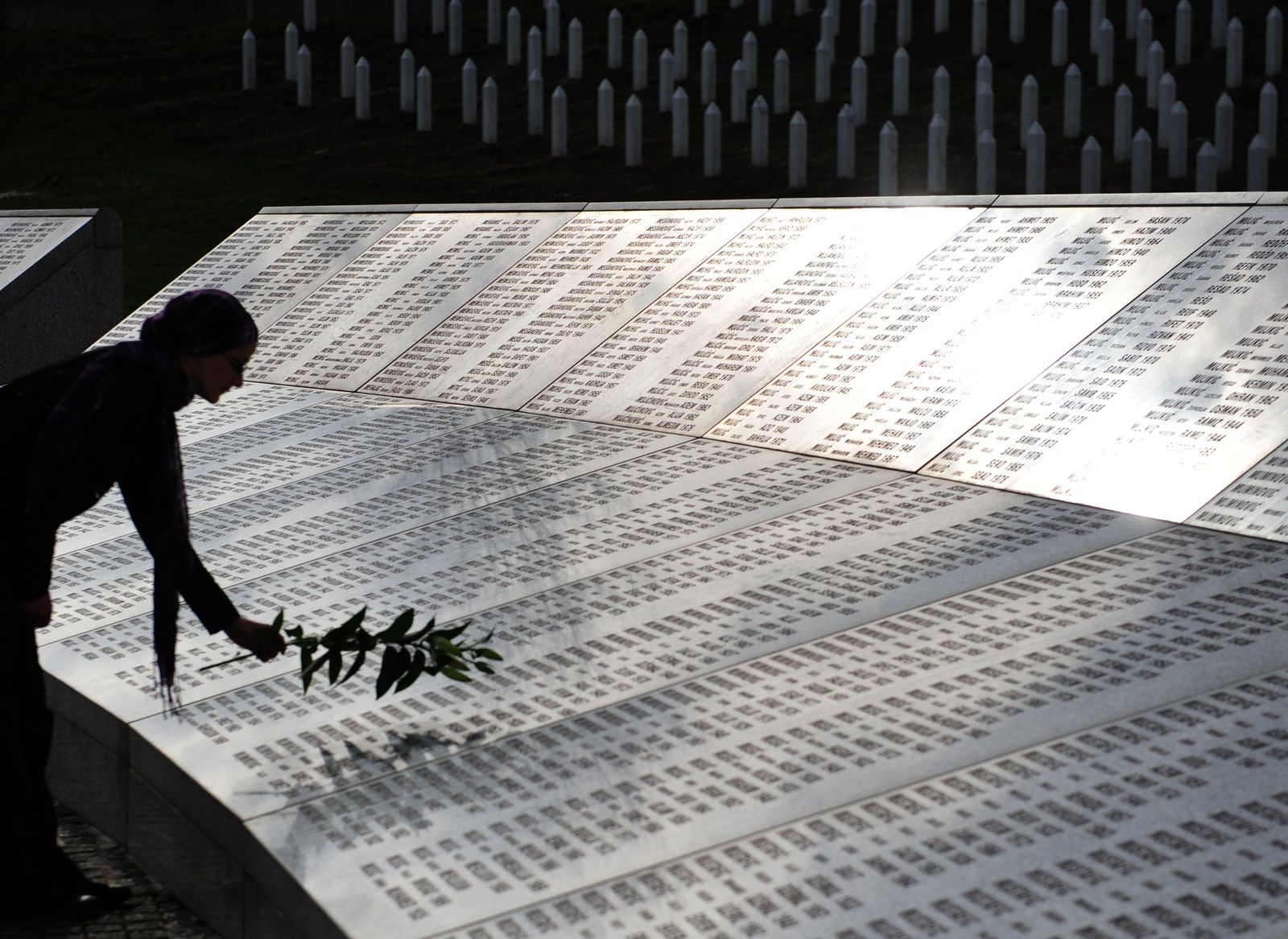 A Bosnian Muslim woman pays her respects to the victims of the 1995 Srebrenica massacre.