It's a bitter disappointment for the environmentalist Green Party. One of the driving forces behind the protest movement against Stuttgart 21 -- the massive and controversial plan to restructure central Stuttgart and rebuild its train station underground -- the party was buoyed by wave of popular support into an historic victory in Baden-Württemberg's state election this March. But this weekend, their post-election honeymoon came to an end, with voters clearly backing the infrastructure project in a referendum held on Sunday.

Some 58.8 percent of voters cast their ballots in favor of continuing Stuttgart 21 construction, while 41.2 percent were opposed. At 48.3 percent, turnout was significantly lower than in March, when Winfried Kretschmann became the first Green Party state governor in German history. Still, it is a personal defeat for Kretschmann, who helped form a broad popular movement out of a small protest against Deutsche Bahn's plans to make the Stuttgart station a major European hub.

The bar was high for project opponents on Sunday. Not only would they have had to win the referendum, but their vote total would also have had to correspond to one-third of the 7.6 million registered voters in the state. Their failure to do so means that Kretschmann's party, along with their junior coalition partners, the center-left Social Democrats, will be forced to implement the project they set out to block.

Kretschmann did not conceal his disappointment on Sunday, but called the referendum a "great victory for democracy" and a step foward for civic society. "When the people decide, it's the last word," he said. "Deutsche Bahn has the right to build, and we must guarantee that they can indeed build." Still, Kretschmann said, his government would supervise progress both "critically and constructively." He and other opponents have said that construction would be too expensive, unnecessary and would damage the environment. Planning for the project, which began more than a decade ago, also did not sufficiently include residents, they alleged.

But now that it will go forward, the task of turning the Stuttgart station into an underground through station must not exceed the upper limit of €4.5 billion, Kretschmann said, adding that the state would not increase its contribution of €1 billion. "We expect Deutsche Bahn to hold to this, and if the costs are higher, they'll have to pay," he said.

Meanwhile, hardcore anti-Stuttgart 21 activists have pledged to continue their resistance until the project is defeated. State Transportation Minister and Green politician Winfried Hermann, who rejected calls to step down after the referendum flop, said that further protests remained legitimate. "It's a part of democracy that even a minority be allowed to protest, even if it displeases the majority," he told broadcaster SWR on Monday, adding a call for demonstrators to refrain from violence, which has been a problem in the past.

German Transportation Minister Peter Ramsauer, of Chancellor Angela Merkel's conservatives, welcomed the state's acceptance of Stuttgart 21. "The result is an important signal for Germany as a business location," he said on Sunday evening in Berlin, adding that "large infrastructure projects must continue to be possible."

German commentators on Monday weighed the consequences of the referendum for both the Greens and German democracy.

"Those who believe that the battle over Stuttgart 21 cost a lot of money, time and nerves are thinking too narrowly. The clear result of the referendum once again shows the opponents of the train station that a 'perceived majority,' like the one seen among the demonstrators at the construction site, can be just that: perceived. ... The losers will have to comfort themselves with the words of state governor and project opponent Winfried Kretschmann: 'As an adherent to democracy, one must take it in stride.'"

"The station's proponents, along with the skeptics of plebiscitary decisions, must learn from the vote in Baden-Württemberg that politicians should not fear direct democracy. And that a referendum doesn't endanger representative democracy, but can actually enhance it. Neither does it automatically bow to the demands of an engaged minority."

"Still, it remains clear that this Stuttgart 21 referendum came too late -- many years too late. Therefore it shouldn't serve as a national example. Logically such a referendum should take place at the beginning of a decision-making process, not at the end."

"Now it is up to the Green Party, which was voted in to stop this project, to see through the construction process. Governor Winfried Kretschmann will stand by his promise that the building will go ahead. His credibility -- and that of his party -- is at stake. But it is tragic that the Stuttgart 21 opponents' alternative model for the station is actually better and cheaper. The opposition will rise again. We just have to hope that they avoid an escalation of the conflict."

"The example of Stuttgart 21 has shown that direct democracy in the form of a referendum is no cure-all, and can only be one of several options for meeting demands for more 'real' democracy. To answer a question as complex as the construction of an underground railway station with a simple 'yes' or 'no' can't fully live up to demands for an expanded representative democracy."

"We should have the courage in Germany to seek new ways of planning infrastructure projects, other than referendums. New, transparent and structured procedures for involving citizens are needed, such as citizens' discussion forums, political mediation or conferences on potential scenarios are possible alternatives, and have been tried and tested. They rely on cooperation and balance and they help those responsible to take better decisions based on a broader base of information."

"Stuttgart 21 opponents may have had plausible arguments for why a through station was a bad idea. Nevertheless, they can no longer hope for help from above; they won't be able to obtain any more than a referendum. As difficult as it might be for all the dedicated protesters, from now on it is no longer a question of protecting the trees in the palace park from damage, but one of accepting the results of a democratic vote."

"Which doesn't mean that Stuttgart 21 will no longer be a subject of discussion. It will remain a political issue when it comes to identifying the lessons to be drawn from the spectacle. How and when should German citizens be involved when, in the future, other large infrastructure projects are launched? Should they not be included to a much greater degree before decisions are made on their behalf?" 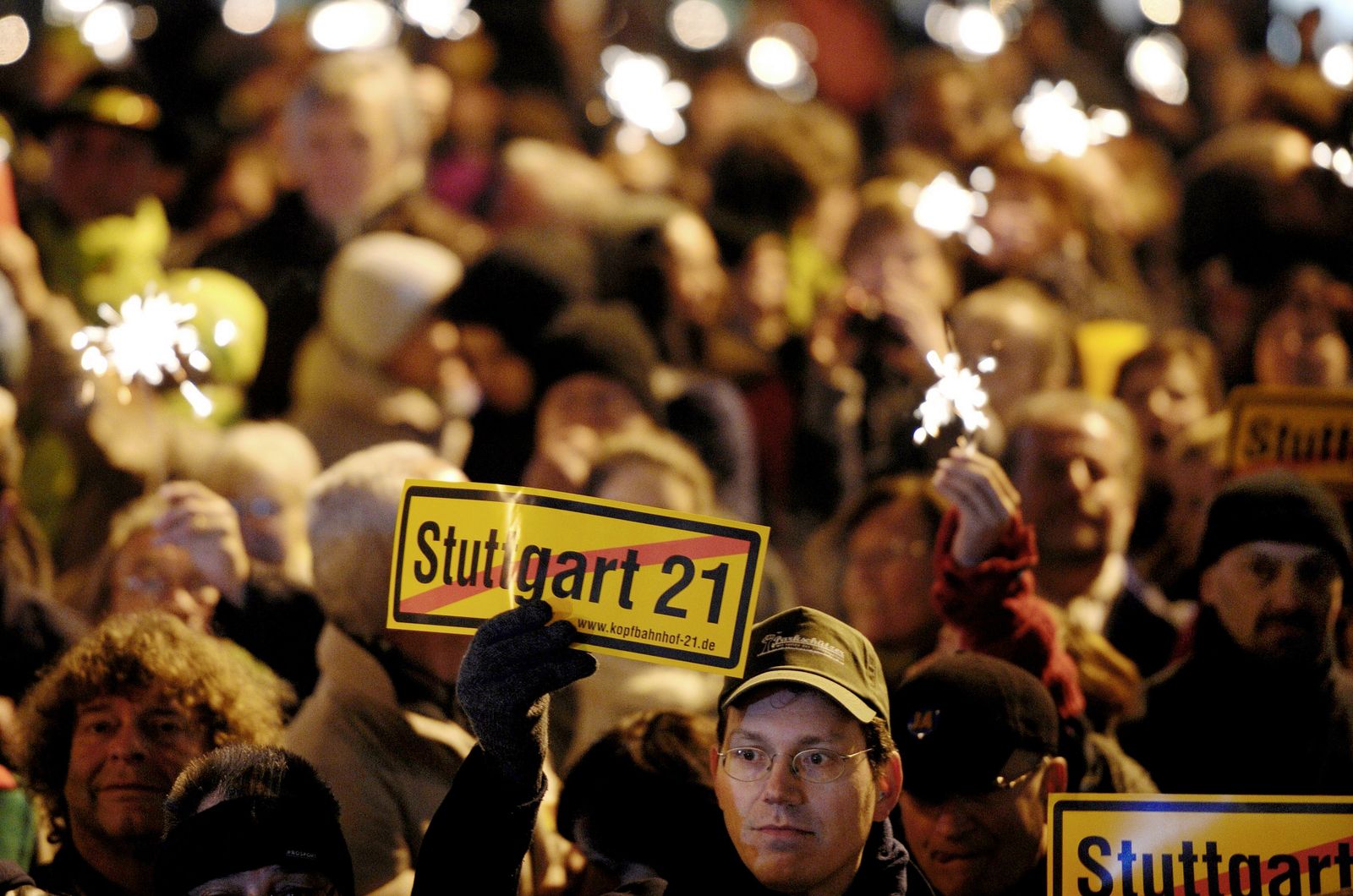