The pressure on German President Christian Wulff to resign has been mounting in recent days. But in a highly anticipated television appearance on Wednesday evening, the head of state made it clear that he had no intention of stepping down.

During a joint interview with the German public broadcasters ARD and ZDF, Wulff admitted that his Dec. 12 phone call to Bild editor in chief Kai Diekmann, where Wulff apparently tried to stop the powerful tabloid from printing a damaging article about his private loan arrangements, had been a "serious mistake that I regret and for which I apologize." He added, however, that he had not tried to prevent the story from being published, but had only wanted the newspaper to "wait" before publishing the story.

The Bild article, which was published on Dec. 13, alleged that Wulff had not given the whole truth in a response to a parliamentary question put to him in February 2010, when he was still governor of the northern state of Lower Saxony, about whether he had business ties with the businessman Egon Geerkens. The report said Wulff's office had declared at the time that there were no business links with Geerkens. According to Bild, however, Wulff and his wife Bettina had received a loan of €500,000 ($660,000) from Geerkens' wife Edith in order to buy a home. The article caused a pre-Christmas blizzard of media coverage about Wulff's private loan arrangements, prompting Wulff to apologize for not having been completely "straight" in his parliamentary response in 2010.

The scandal has flared up again in recent days following the revelations about Wulff's phone call to Diekmann, which many see as an attempt by the head of state to impinge on the freedom of the press. Calls for Wulff's resignation from the presidency, a position that is largely ceremonial, have grown increasingly loud, and he has become the target of criticism and pointed satire on German-language websites.

'A Victim of the Media'

But when asked in Wednesday's interview if he had seriously considered resigning, he said no. "During all these weeks, I have had great support from many citizens, my friends and also my colleagues," he said. "I enjoy carrying out my duties, and I have committed myself to them for five years." He said he wanted to "take stock after five years and show that I was a good president."

Wulff also said he felt like he'd been "a victim of the media." He accused Bild of linking him to "untruths" and "dragging" his friends into the public spotlight. He said that research by journalists had caused an "uproar" in his home village.

He also defended his decision to take the loan from a friend. "I would not like to be president of a country in which you can no longer borrow money from a friend," he said. 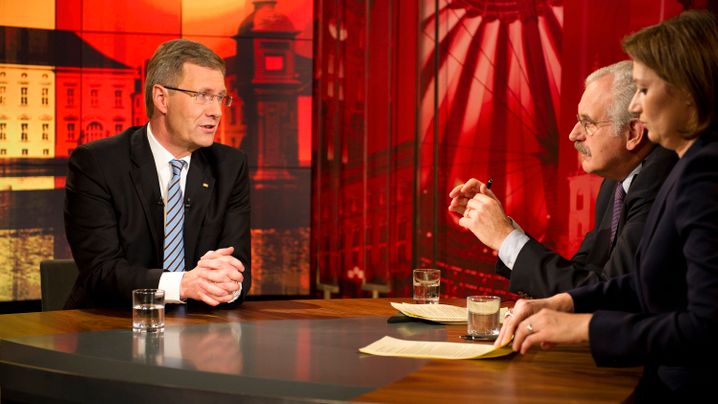 Bild reacted to the interview by directly contradicting Wulff's version of events. Referring to Wulff's claim that he had not tried to stop the loan story from being published, Nikolaus Blome, the newspaper's deputy editor in chief, said that "we had a very different impression at the time." The voicemail message "clearly had the objective of stopping this piece from being published," Blome told Deutschlandfunk radio.

Ahead of the television interview, the German Association of Journalists had criticized Wulff's decision to give an interview to selected television presenters only instead of facing media questions in a press conference.

Opposition politicians reacted to the interview with scorn. "Wulff just talked about his feelings -- he didn't answer any of the questions that are preoccupying the country," said senior Green Party politician Renate Künast in remarks to Bild. Sigmar Gabriel, leader of the center-left Social Democrats, called on Chancellor Angela Merkel to review Wulff's suitability for the position of head of state. "This is no longer an issue just for Wulff; this is an issue for Merkel," Gabriel said.

On Thursday, German commentators express their doubts about whether Wulff can carry on as president.

"Christian Wulff has once again acknowledged that he made a serious mistake and apologized. But he wants to remain president because he 'enjoys' carrying out his duties. That is understandable: The only question is whether he carries out his duties well."

"In recent weeks, Wulff has lost his credibility as a role model and moral authority. The reason for this is not so much the unfortunate, but not necessarily far-reaching, loan affair … but the so-called 'telephone scandal.' Wulff's attempt to influence the freedom of the press, documented in a voicemail message, shows a lack of judgment that is incomprehensible in such an experienced politician."

"The official powers of the German president are narrow in scope, something that has contributed to the moral aspects of the position becoming overemphasized. The Federal Republic of Germany can therefore cope with a president who is now on probation. But the affair has inflicted further damage on the reputation of the political establishment as a whole."

"The German president should embody the best of our country, not its everyday average. Christian Wulff is certainly capable of doing that. His speech on the role of Islam in Germany was not concrete enough, but it was based on an ideal. In his reaction to the revelations about neo-Nazi terror, he showed dismay and even shock. It was a good thing, and it is still a good thing, that we experienced those things."

"The president, because he embodies the best in Germany, should also be able to talk openly about mistakes, without holding anything back. The way Wulff defended his private financial deal -- which because of his position is not just a private matter -- is not fitting for his office. The way he reacted impulsively and emotionally to (journalists') research into things that were, as he admitted himself, 'legally correct, but not right,' is not fitting for his office."

"It is indisputable that other people also made mistakes as part of this affair. It is also indisputable, however, that the president should set the benchmark for Germany in his own behavior."

"If you are caught with your pants down, then it is no longer a question of whether you can explain the situation gracefully. Some things just can't be justified convincingly. And an attempt to control an uncontrollable situation doesn't help things. What possessed the president to give his version of events to, of all people, carefully selected interviewers? That only reinforces the impression that he does not have a very high opinion of press freedom."

"Why doesn't the president simply step down? Because he would risk losing those things that Christian Wulff considers the essence of his bourgeois existence. Large sections of the population would find it wonderful to have the state take care of them with a generous pension without having to do anything in return (i.e., like a German president who has left office). But those people live in a different world from Wulff. He apparently enjoys glamorous events and needs to be close to people that he considers glamorous. Having to suddenly give all that up must seem very threatening."

"One can sympathize with Christian Wulff. He is not, as his oath of office stipulates, dedicating his efforts to protecting the German people from harm, but to protecting himself. He is putting all his energy into explaining himself and making excuses for his mistakes. He has become entangled by his own contradictions and is being choked by them. He is trying to gain a bit of breathing room with yet another public statement."

"He is a president who in his weakness clings to his position because the role gives him the support that he would not otherwise have. According to the German constitution, the president has 'the power to pardon individual offenders.' Wulff is the first president who has pardoned himself."

"No, this 21-minute performance does not get the president off the hook. Christian Wulff has played his last card: People make mistakes, and he wants to learn from those mistakes, he said ruefully on public television. … At this point, what was needed was not just contrite justification (of his acts), but coming clean with the whole truth. But Christian Wulff didn't do that, neither in relation to his phone call to Bild nor his controversial home loans. By doing so, Wulff has missed another -- perhaps his last -- chance to continue in office with dignity."

"Wulff's case reflects the change in values that has happened since the 1990s. … At one time, Wulff's cheap loans -- first from friends, then from a state-owned regional bank -- would probably not have been thought worthy of comment. But, today, anything that doesn't befit the office of president is not allowed from a president. Those who have no power must be even better role models, exactly because the prevailing morality is so unforgiving."

"Even newer than the change in values is the excessive medialization that has brought the private into the public sphere. … Those who … like Wulff dance with (tabloids) Bild and Bunte will fall."

"It's also true that those who both beg and make threats are victims and perpetrators alike. The head of state who ventured into the malicious media arena has been weighed up -- and found to be lacking. A forced resignation of the president would be a grim moment in the life of Germany, but nothing new, because the Circus Maximus demands to see blood on a regular basis. That's just as true today as it was 2,000 years ago."

"For his defense, the president has chosen the same approach as former Defense Minister Karl-Theodor zu Guttenberg (who stepped down in March 2011 following a plagiarism scandal): brotherhood with the people. According to this version, the evil Berlin press is conducting a witch hunt against a person who is popular with the general public, but the populace continues to support its favorite."

"But his explanation lacked … real insight and genuine repentance. Instead, on Wednesday, Wulff came across as a very small man hiding behind the backs of the people. This is unworthy of a German president."

"The television interview has not put an end to the affair. The president has not regained the moral authority that would enable him to perform his duties." 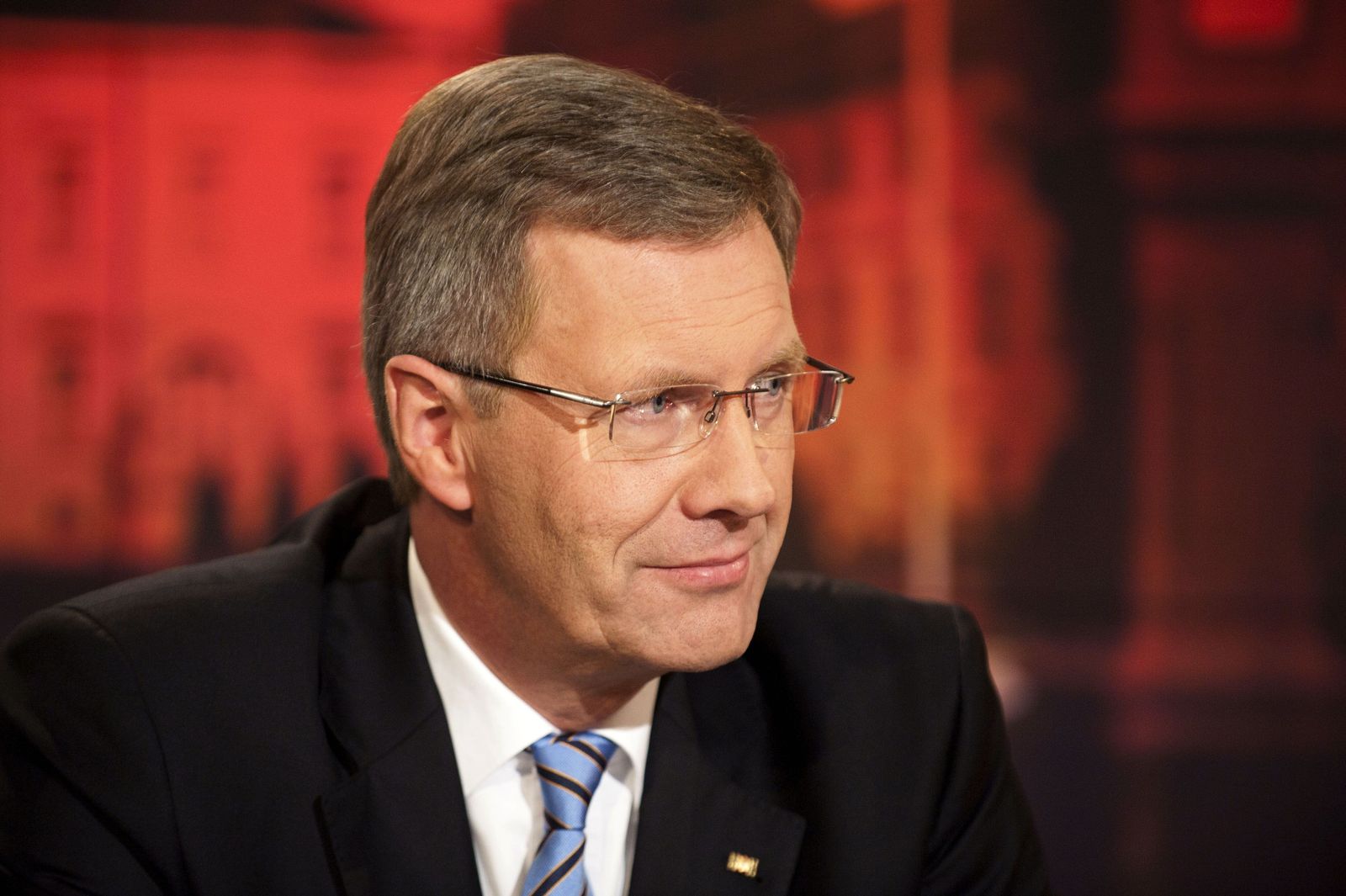