In Germany, the office of the federal president serves as a sort of moral compass for the nation. Largely symbolic in nature, the president gives a televised prime time speech on Christmas day offering guidance to Germans on the political and moral issues of the day.

Allegations that the president made misleading statements about accepting a sizeable loan from an individual businessman and friend at a favorable interest rate are not becoming to his elevated position. Thus, one week into his personal loan affair, pressure continues to mount on Christian Wulff.

The president is under fire for not disclosing the 2008 loan when asked by the Lower Saxony state parliament if he had any business ties with friend and millionaire entrepreneur Egon Geerkens. Wulff said he had none. But last week it emerged that Wulff and his new wife at the time had accepted a private loan for some €500,000 from Egon's wife Edith. For months, Wulff had fought attempts by journalists to obtain information pertaining to his 2008 purchase of a home near Hanover.

In its latest issue, SPIEGEL reports that the money for the loan came de facto from Egon Geerkens himself. Geerkens, 67, told SPIEGEL that he, not his wife, had led the negotiations over the loan. The report also notes that Geerkens had power of attorney over the account the money came from and that he was also likely its source. He reportedly keeps his property separate from that of his wife, and she brought only a small income to the relationship as an employee at his jewellery store.

The image and credibility of the German president has sustained lasting damage in the past week because of the allegations and speculation, and the latest contradictions have raised even more questions.

Among Chancellor Merkel's conservative Christian Democrats (CDU), off-the-record criticism of fellow party member Wulff's approach to the affair has been clear. Many feel he should be doing more to clarify the events. "Support is getting weaker by the day," one party source said. The source also described Wulff's strategy of communicating to the public via his attorneys as "insensitive." Some voices close to Merkel's cabinet have also been critical. One source said Wulff still had explaining to do, but added that the opportunity for resolving the conflict elegantly had already passed.

On Sunday, Wulff took steps to illuminate his private dealings by releasing, through his attorneys, a list of all the vacations he had spent in the homes and mansions of wealthy friends. The picture emerging of the German president is one of a man from a family of modest means (his dad owned a gas station) who rose up the political ladder to become a bon vivant -- a politician who enjoys a luxurious lifestyle for which it appears he allows rich and influential friends to pick up the tab.

Damage Control in the CDU

So far, virtually all members in Wulff's CDU have avoided public criticism of the president. No one seems interested in causing further damage to their government coalition, already burdened by conflict with its junior partners, the business friendly Free Democrats. In Germany, the president is not elected through a direct popular vote, but rather through the complicated procedures of the German Federal Assembly, the body comprised of delegates from the national parliament and the 16 state parliaments. Given its recent string of state election losses, it is uncertain whether the CDU would even be able to elect its choice for a successor to Wulff if he were to step down.

CDU party leaders are seeking to limit the damage caused by the accusations. During the middle of last week, Chancellor Merkel expressed her support for Wulff. On Sunday, CDU General Secretary Hermann Gröhe also offered his backing. "I have full trust in his statements," he told the daily Die Welt.

"The debate on this issue should end," Michael Fuchs, the head of the parliamentary group for Wulff's CDU told SPIEGEL ONLINE. "A private loan is a totally normal procedure and is not objectionable." At the same time, he said that Wulff's "information management" opened up a lot of room for speculation.

Critics take a different view on whether the loan was purely a private issue. "We need to hold our politicians to a higher standard than that of normal people," Düsseldorf University law professor Martin Morlok told SPIEGEL ONLINE. "As a politician, you can't just allow a private creditor to put a half a million euros into your hands."

Meanwhile, the opposition is calling for clarification, with some even demanding his resignation.

The president himself appears to be attempting to ride out the affair. When a passer-by recently asked him on a Berlin street if he would step down, Wulff answered: "No, we're not doing that." Speaking to public broadcaster MDR on Saturday, Wulff said, "One has to know what he is doing, and one must take responsibility for his actions. I can. And that is decisive."

The debate over whether Wulff should remain in the office of president is far from finished. Editorialists in Germany on Monday continued to weigh in on the Wulff affair, unleashing severe criticism on both sides of the political spectrum.

"Wulff is a president with shortcomings. His greatest mistake, however, is that he doesn't learn from his blunders. The loan scandal has largely become a scandal only because Wulff's statements have distorted the truth."

"Wulff's mistakes have not been historic in dimension, but they could develop into a historic crisis for the office of German president. Were Wulff forced to resign in disgrace, as did his predecessor Horst Köhler (eds. note: Köhler resigned in May 2012 following widespread critique over comments he made suggesting the German military should pursue German economic goals abroad), the office of president could hardly withstand it. In such a situation, the office would be bereft of all substance. The pettily embarrassing and ethically objectionable Wulff loan affair contains the seeds of an institutional crisis -- a state crisis if you will. Germany's highest office is completely dependent on its occupant. This person is what makes the office of German president great or small."

"If you calculate the spread, you can easily deduce that the advantage (in the loan) to Wulff was easily within the five-digit figures. A former governor who is now president and loves to talk about creditworthiness, banks and guarantees, knows that. The gloomy dimension of this monetary advantage may be the reason that Wulff kept silent about the transaction in the Lower-Saxony parliament. That's why it is almost irrelevant from which bank account Geerkens wired the half-million euros. The money never should have been transferred. … Instead of dispatching his spokesman and attorneys or to defiantly claim he can justify everything, perhaps Wulff should show a bit more remorse."

"Wulff claims that 'much dust has been kicked up'. But is this really much ado about nothing? It is actually dust that has settled in the gaps created by doubt, suspicions and the loss of credibility that Wulff's explanations have not succeeded in clearing up this week. That has been confirmed by those who believed they needed to publicly jump to his aid. The chancellor who in the case of Köhler failed to provide any statements of support out of 'respect' for the office of the president, praised Wulff twice last week. This is because the last thing Merkel needs in addition to the euro crisis and that with her junior coalition partner, the Free Democrats, is for the second federal president of her choosing to resign."

"People consider it to be possible, also within the conservative coalition government, that there will be further 'revelations'. … It's not only the critics who need to respect the dignity of the office, but also the man in that office himself."

"The president lied. In the narrower sense, this is no longer just about whether Wulff, in formal legal terms, spoke an untruth when he was still governor of Lower Saxony. The issue is the fact that he often found himself in gray areas that are politically dubious. And then he tried to skate around the issue as though it presented no problem whatsoever that a politician had created dependencies to people with concrete business interests."

"At one point Wulff took a vacation to Mallorca at the expense of finance entrepreneur Carsten Maschmayer. Another time he allowed his whole family to travel with a free business-class upgrade to Florida. You don't have to be particularly corrupt to know that such generous gestures are accompanied by a certain calculation. Especially when they emanate from entrepreneurs who are successful precisely because they know how to help themselves reach success."

"With this the federal president has exposed a character that thinks it normal for top politicians to first take vacations with top executives and then to invite them along on business trips. Despite the fact that, in his short time in office, Wulff has achieved some merit, he has become unacceptable in the role of head of state."

"If Wulff didn't outright lie about the €500,000 loan -- first to the Lower Saxony parliament and later to the German public -- then he was at least misleading. Wulff is now subtly admitting only to that which is specifically asked of him, or what has already long been known, without revealing the circumstances of the loan or the true background. And what parliament in Lower Saxony wanted to know is precisely what the public wants to know now: Who gave what to whom, and why? As a governor, Wulff broke an important democratic rule by tricking parliament and, by doing so, stripping it of its right of scrutiny. Wulff also consciously misguided the public. In other words, he took them for fools."

"It is hopeless for the president to barricade himself behind his version of events as long as it remains a case of one person's word against the another's in key aspects of the affair. If Egon Geerkens' declarations turn out to be true, then Wulff's statement from Thursday would be inadequate. In that case the issue would be his veracity as president, and no longer about his statement in front of the Lower Saxony state parliament. It would become a national scandal. Wulff, as head of state, is edging closer to reaching the place where Karl-Theodor zu Guttenberg was in February, or where (former Chancellor) Helmut Kohl was some 12 years ago." 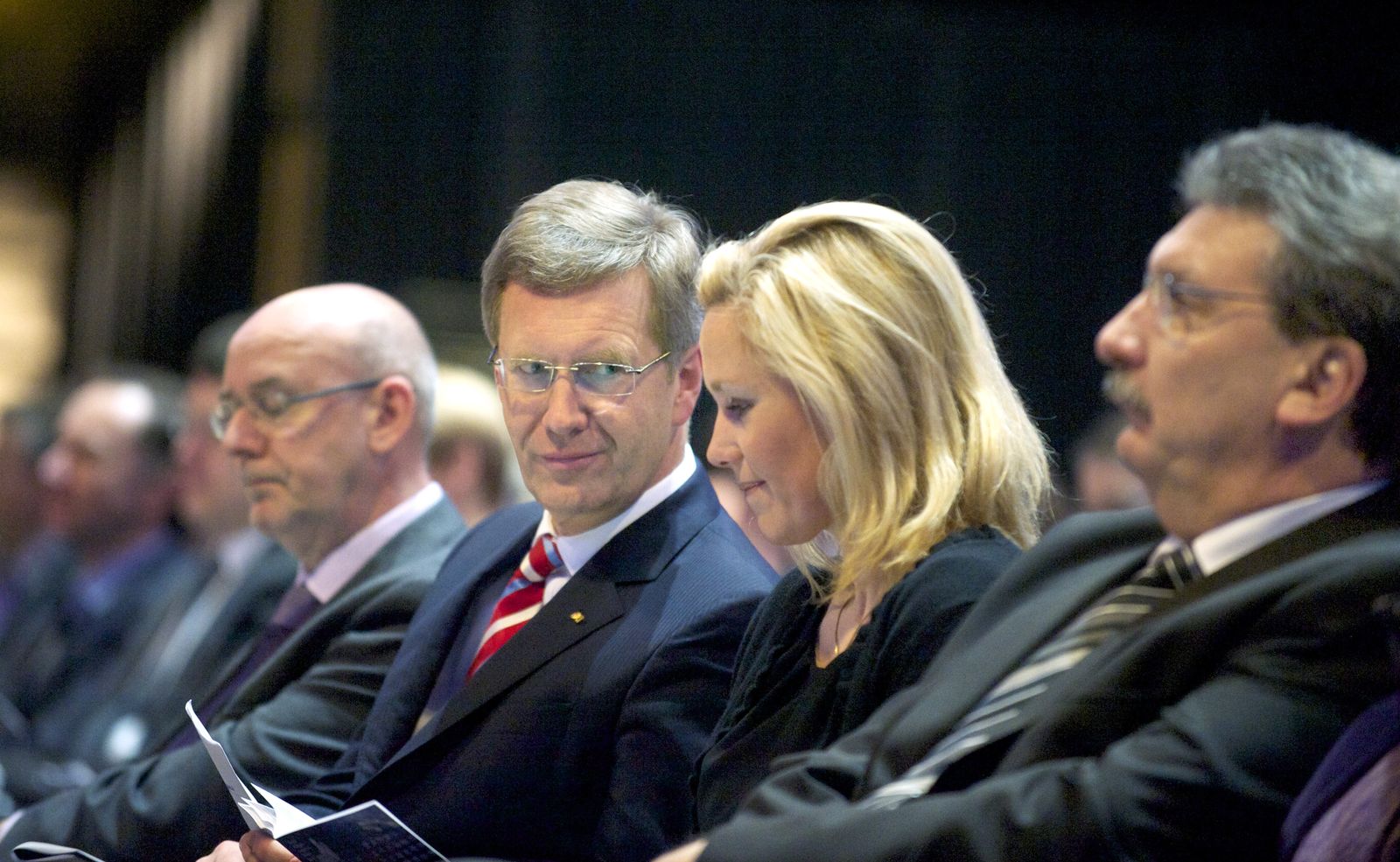 President Wulff (second from left) and his wife at a church service in Berlin on Sunday.