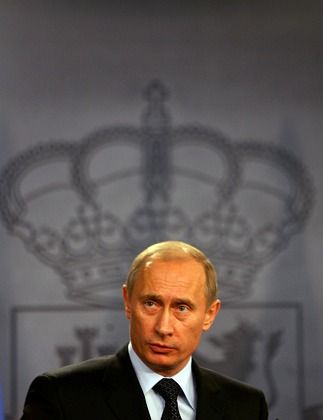 Russian President Vladimir Putin is blowing a lot of steam over the US missile shield.

It was a state of the nation address like no other. On Thursday, Russian President Vladimir Putin took to the microphone in Moscow to tell his fellow Russians how things were going in the county. The answer? Not bad. Average income has doubled in the last seven years, birth rates are on the rise and tax revenues are climbing.

But Putin didn't just have good news. He also spoke of widespread poverty in Russia despite billions in oil and gas revenues, and of a lack of high tech companies in the country. And then there's the planned US missile defense shield. The Russian president on Thursday called for a suspension of Russia's obligations under the 1990 Conventional Forces in Europe treaty.

So what's going on in Moscow? German commentators on Friday take a look at Putin's speech and analyze his posturing on the missile defense shield.

"Without naming names, Putin had opposition groups in mind -- like former chess grandmaster Garry Kasparov's 'Other Russia' -- when he accused critics of using 'pseudo-democratic phraseology' and when he spoke of a 'growing flow of foreign money into Russia' aiming at a 'direct interference with our internal affairs.' It was a standard accusation used during the Soviet era. But Putin used the charge to urge the Russian parliament to quickly pass legislation strengthening penalties for 'extremist activities.' ... With such policies, Putin is leading Russia away from the West."

"This course is necessarily leading Russia closer to its last allies, which has gathered in a military alliance for 'collective security.' The group -- a sort of shrunken version of the Soviet-era Warsaw Pact -- is exclusively made up of more or less authoritarian states: Belarus, Armenia, Kazakhstan, Kyrgyzstan, Tajikistan and Uzbekistan. Using Russian rubles, Moscow holds together a collection poverty-stricken nations and second-class dictatorships, which, as opposed to the Soviet era, doesn't even have a common worldview. Even in Moscow some people are aware that Russia can hardly compete with the West with such an alliance."

"Moscow sees itself as more and more harried and encircled by NATO. The NATO membership of its earlier Eastern European allies was the first blow. More difficult to take was the entry of the three Baltic countries Latvia, Lithuania and Estonia. That Washington is now encouraging two more former Soviet states to join -- Georgia and Ukraine -- causes resentment in Russia's political classes."

Conservative daily Die Welt thinks it knows what the consequences of Putin's threat to suspend the Conventional Forces in Europe treaty might be:

"More than any other party, the Social Democrats will begin warning of a new arms race and will call on the war-mongering US president to forget about the evil missile defense shield. Conservative politicians will join them, or at least won't offer any resistance; and thus, the gulf between Europe and the US will grow deeper. Putin's strategy will bear fruit"

"Putin will not go beyond the rhetoric. Moscow remains dependent on close relations with the West. More than 48 percent of Russia's foreign trade is with the European Union. And the Kremlin likewise cannot foreswear close relations with Washington. There are reasons enough to remain calm. Hopefully German politicians will as well."

"Putin has seen his opportunity to gloriously separate himself from his predecessors (Boris) Yeltsin and (Mikhail) Gorbachev by leaving behind an economically and politically strengthened Russia when he steps down next year. His popularity in Russia remains high -- in part, of course, because the Kremlin tightly controls the country's media."

"But positive domestic spirits aside, Putin seems to understand that, at the end of his term, he will still not have been able to stop the US. No matter how Russia tries to face the US and NATO in the current tiff, the missile shield will be built -- and bases will be in Poland. This realization still doesn't seem to be enough to force Putin into a compromise with Washington and Brussels. His successor in the Kremlin will not only inherit overflowing state coffers, but also a rift between Russia and the West that is deeper than at any time since the end of the Cold War."

"When Putin criticizes the missile shield and then follows up with threats, the issue at heart is not the shield itself. One can, in fact, dispute whether the shield is at all useful. What Washington intends to install is so modest that any concern about it neutralizing Russia's strategic potential appears ridiculous. The Kremlin is exploiting the issue because it wants to drive a wedge between NATO allies and separate Europe from America -- as revenge for the eastern expansion of NATO. He also wants to make it difficult to integrate Georgia and Ukraine  into the alliance. Putin is using Cold War bombast as a deterrent."