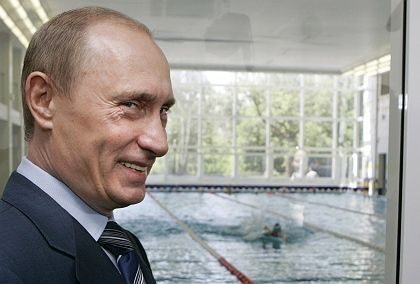 The Vlad factor: Will Putin upstage Merkel and Bush at the G-8 summit?

Forget the climate change dispute between Washington and Berlin. The real drama in the run-up to Wednesday's G-8 summit in Germany, is the sharpening rhetoric between US President George W. Bush and Russian President Vladimir Putin. Call it the cowboy vs. the KGB.

When Bush first met Putin in 2001, he said he was able to "get a sense of his soul." He liked what he saw, too, predicting a beautiful friendship and calling the Kremlin man "Pootie-Poot." Six years later, Pootie-Poot has now been downgraded to "Friend Vladimir," and Bush, who wants to build a nuclear missile defense system in Eastern Europe, speaks of "derailed" democratic reforms in Russia with "troubling implications." With an eye to Washington, Putin, massively riled by the prospect of part of the US nuclear deterrent being based in former Soviet satellite states, is speaking of a new Cold War and the prospect of pointing missiles at European targets again.

Putin's pointed words have some commentators in Germany wondering who the true Black Bloc is at this year's G-8 summit at Heiligendamm. Is it the black-clad, stone throwing anarchists who injured more than 400 ill-prepared police in some of the worst rioting seen in Germany in decades in Rostock on Saturday? Or is it Russian President Vladimir Putin?

"If being autonomous means being independent, creating playing room and brusquely criticizing American policies, then at least one Autonom (the German term for anarchist or Black Bloc members), will have no trouble getting across the fence and security measures at Heiligendamm: Russian President Vladimir Putin."

"In foreign and security policy, Russia under Putin's leadership has reached the highest degree of autonomy from the US, the world power No. 1, of any European country -- often using methods that couldn't exactly be described as flawlessly democratic. He used his flamboyant appearance at the Munich Security Conference in February to lash out at Washington. At the time, he came across like a son-in-law at a reunion of a family he has married into who suddenly and surprisingly lets his relatives know what he has long felt about them. At Heiligendamm, Putin may be the one who ensures that there is little harmony."

"In the Kremlin, the dream is still alive for a Paris-Berlin-Moscow axis to counter American dominance in the world. And for one historical second, this trio was in fact embodied by Jacques Chirac, Gerhard Schröder and Vladimir Putin. But Moscow harbors no illusions that there are any signs of such an alliance at the moment given the "pro-American line of Merkel and Sarkozy," as Kremlin-aligned analyst and former KGB General Wagif Husseinov recently wrote. At the start of the G-8 summit, writes former Soviet ambassador to Germany and current vice chairman of the foreign affairs committee of the Duma, Yuli Kvitsinsky, 'The West is increasing pressure from all sides.' So it's only logical that Putin would use sharp words at Heiligendamm to discuss the issue that irritates him the most: the planned American missile defense system in Europe."

"In an interview with SPIEGEL this week, Putin explained why the US plans are of fundamental significance to him: 'For the first time in the history of the European continent there will be elements of the nuclear potential of the United States, which fully changes the whole configuration of international security.' Indeed, appeals by Chancellor Merkel that 'misunderstandings and prejudices must be dispelled' are unlikely to do much to change his position."

"The Black Bloc isn't the only group to use this monstrously big annual event as an opportunity to make an impression on the public. Two participants, the American and Russian president, already tried to do this before arriving in an unusual way."

"Putin, who the West would still like to recognize as an enlightened technocrat who is at least half-way democratic, is presenting himself as a born-again Cold Warrior -- one who without even batting an eyelid announced that he would unfortunately have to point his nuclear missiles at Western and Central Europe again. That's the sticks approach to his attempt drive a wedge between NATO and the EU over the American missile defense shield plan. Merkel already turned her nose up at Putin's saccharine offer for Western Europeans to join him in demonizing America. And what of the president of whom Putin is implying the worst? He's devilishly good. Bush is giving a heartfelt invite to his 'Friend Vladimir' to participate in the missile defense and to visit his father's home at Kennebunkport."

"This charm offensive makes it difficult for Putin's sympathizers in Western Europe to direct all of the blame for the cooling off of Russian-American relations to the usual suspect. After all, Washington has no interest whatsoever in deteriorating ties with Moscow, which could actually serve to worsen some of the crises developing in the world-- like the building of an Iranian nuclear bomb, for example. Still, the Russian president now needs to show, through actions, that in security questions in the very least, the Kremlin is still in agreement with the West. But by raising the scenario of a nuclear war in Europe, Putin suggests that he isn't."

Earlier this week, the Basque separatist terrorist organization ETA suspended its 14-month ceasefire against the Spanish government, ending short term hopes that the government of Prime Minister Jose Luis Zapatero could establish peace with the group. Since 1968, ETA has been fighting for the creation of an independent Basque state that would include Spain's northwestern Basque country, the neighboring region of Navarra and Basque-populated areas in southwest France. In nearly four decades of terrorist attacks, ETA has killed more than 800 people.

"ETA's announcement is anything but surprising. It's nothing more than the written attestation of a situation that has been present for months. The attack on the Madrid Airport that marked the return of violence happened back in December. For Prime Minister Zapatero, ETA's statement is a setback. Overcoming terrorism is the ambitious goal set by the government. But now it is clear that he will hardly be able to achieve it. Despite all hopes, above all in the Basque country, Spain is going to have to get used to living in a constant state of fear again -- presumably for years to come."

"ETA may be trying to hold the government responsible for the failure of the peace process, but the Basque separatist organization has destroyed hopes for a future without terror on its own."

"Zapatero's government thought that it could hold peace talks with a murderers, blackmailers and propagandists of a left-wing nationalism. But now they have no choice other than to see that this controversial domestic policy adventure has turned out to be an error. That ETA has called Zapatero, for whom the price of the ceasefire was several human lives, a fascist further underscores this error. Now both the government and opposition in Madrid need to find a common basis for dealing with ETA and the leaders of its political arm, Batasuna. But given the political-cultural rift that divides them, this is not going to be easy. Nevertheless, it is necessary. The starting point must be a firm conviction that democracy can never get weak-knees in the face of terrorists."

"The peace process has suffered a serious setback, and it is unclear when it can get back on track. But it is clear that it must. The conflict over the right of self-determination for the Basque people, who have given ETA its power over the decades, is political in nature and can only be solved politically. Just as illusionary as the idea of the separatists that they can pave their way to freedom by bombing is the belief of many Spaniards that the separatist militants can be brought to their knees by the police and criminal justice system."

What ETA must do is clear, it must disavow violence and abandon its arsenal. But it's less clear what the Spanish state can give in return. Should it provide amnesty to all or some of the incarcerated ETA members and supporters? Should it merge the Basque country with the Basque dominated Navarra region? Should a it hold a referendum for greater autonomy for the Basques? The Spanish government has been unwilling in recent months to discuss any of these options -- and as long as the ETA bombs continue to come, negotiations are unimaginable. But peace won't be possible if the government doesn't take action."