When Munich pitches its tents at the next Oktoberfest, the usual oompah bands will be on hand, generously-sized mugs of beer will be tapped for millions and tens of thousands of rotisserie chickens will be served to severely inebriated revellers from all over the world. But next year, one Oktoberfest habitus will be missing: smoking. In a vote that is being seen as a litmus test for similar restrictions across the country, Bavarians voted on Sunday by a 61 percent majority to ban smoking in bars and restaurants starting on August 1, closing all loopholes in an existing state smoking ban.

In 2008, Bavaria introduced one of the country's strictest prohibitions on public smoking, but after the governing party, the Christian Social Union (CSU), lost support in municipal and state elections and was forced to form a coalition government after years of absolute majorities, politicians loosened the law. The relaxing of the law saw loopholes added that permitted smoking in special smoking rooms in restaurants and larger bars as well as in smaller neighborhood pubs. A provision also ensured that smoking would be allowed in the Oktoberfest tents.

The success of Sunday's referendum has rekindled a national debate about smoking laws across Germany. Politicians in other states said Monday they would like to see a tightening of their anti-smoking legislation. The party that successfully pushed through the Bavarian initiative, the Ecological Democratic Party (ÖKO), has said it would like to try to introduce a referendum in the city-state of Hamburg. A similar initiative is planned for Berlin. And in North Rhine-Westphalia, the Social Democrats and Greens have said they would like to review the state's anti-smoking law after they form a minority government -- likely to happen this month -- in order to eliminate loopholes.

Despite a low voter turnout of just 37.7 percent, others see the plebiscite as a successful example of direct democracy in Germany and are calling for the introduction of referenda at the national level. Given Germany's difficult history, and its strict decentralization in the postwar era, direct democracy at the federal level has long been frowned upon, and it is not foreseen in the country's constitution. But 65 years after the war, many would like to see that change.

In Tuesday's newspapers, many editorialists argue it is time to introduce national plebiscites in Germany. Others look to Sunday's vote and see in it a rebuke to the poor political performance of the CSU in recent years.

"The goal of 'health protection' is becoming a blank check for government incursions into private life. Healthy nutrition and fitness are being viewed more and more by politicians as the responsibility of the state.  Health consciousness has become the kind of ethical compass Christian faith once provided. People used to go to church, but now they celebrate a cult of the body."

"The fact that the Bavarian referendum was pushed through by a conservative-ecological sect, the ÖDP party, ought to give people pause. The statements this political grouping has made about mobile phones, genetic technology and other health issues have been based more on esotericism than science."

"The result of the plebiscite is democratic, but it does not represent freedom. For freedom also includes the right of minorities to their enjoyment, so long as it doesn't harm anyone else. It shows that, these days, activists are not only determining the course of politics in elections, but also in referenda. That's because fewer and fewer voters are taking an interest in public concerns. Only 23 percent of Bavaria's 9.4 million eligible voters were enough to score a victory against pubs that allow smoking."

"Smokers have long been a minority in Germany. On average, their percentage of the population has shrunk in the past 15 years from 36 percent to 33.2 percent. In Bavaria, only 30 percent of people still smoke. So you can't blame the 'strongest non-smoking law in Germany' for the CSU's losses at the start of 2008 -- first in local elections and later at the state level. The reasons for that was the era of former Governor Edmund Stoiber and interim governor Günter Beckstein. The fact that the CSU responded not only by changing its leaders, but also by loosening the smoking ban was a typical panic reaction. Two-thirds of Bavarians weren't convinced by this 'new beginning.' With Sunday's referendum, they also showed the government that."

There is often a difference between what politicians consider to be the will of the people and what the people actually want. The smoking referendum was necessary because Bavaria's state government had confused the voters with those who would have liked to cast ballots for the people: The usual lobbyists, associations and interest groups. But now it is precisely the voters for whom the government created so many loopholes in the smoking law that have re-established the stricter law and have led (Bavarian Governor) Horst Seehofer's (CSU-led) government back to the correct path.  If the people at the state level can make decisions for themselves in one form or the other, then there is no reason to refuse to let them do so at the national level.  Referenda would also be good for German democracy at the federal level."

"When they lose touch with what is actually popular, then populists have a real problem. This has been experienced time and again by the CSU in the debate over the smoking ban. First it passed the best non-smoker protections in the country, but then it weakened them in light of poor election showings. Now, a vote of the people is forcing it to restore the original version. It would be too simple to blame the debacle solely on the CSU. Because it is such a clear-cut issue, the lasting battle over the smoking ban mercilessly shows the crisis in German political life -- with all its wrinkles. From the power of deep-pocketed lobbying groups to the strange ramifications of German federalism right up to the peering at short-term polling data, one can see all the mechanisms of a self-imposed inertia."

"Following the debate over Internet censorship laws, the rejection of effective protection for non-smokers has become the second major issue on which politicians appear to have completely overlooked people's true desires. Society has clearly become more diverse, more respectful and also more appreciative of freedom than the champions of an allegedly silent majority would like to think. Perhaps is the right occasion to reconsider the instrument of direct democracy. Referenda are no cure-all for the deficits of politicians, and their results are in no way innovative. But at the end of an agonizing debate in which the main actors have gotten hopelessly carried away, they could have a liberating effect."

"Direct democracy may function in some places, but it is inappropriate for Germany. People's initiatives and referenda may be fine and well for states and municipalities, but at the federal level they are neither nice nor good -- but rather damaging in the worst-case scenario.  After the terrible experiences with direct democracy in the Weimar Republic, the drafters of Germany's constitution didn't want to give the so-easily seduced people the right to co-determination on public issues.  But the reasons given right up to today for preserving a ban on direct democracy at the federal level often aren't based on facts. The constitution states that: "All state authority is derived from the people. It shall be exercised by the people through elections and other votes "

Hints about anti-democratic referenda abroad, like the recent vote in Switzerland to ban minarets are also unobjective. A referendum on that issue wouldn't be permitted in Germany -- and neither would a referendum on re-introducing the death penalty. Germany's constitution bans discrimination against religious groups (including Muslims) just as it does the violation of human dignity (and that includes capital punishment). And what of claims that Germany is a representative democracy that would only be weakened by plebescites? Those who claim otherwise have overlooked the fact that it is those they are putatively representing who have been calling for referenda at the national level. In other words: The introduction of plebecites would represent the majority will of the population. There is nothing better that could happen in a representative democracy. 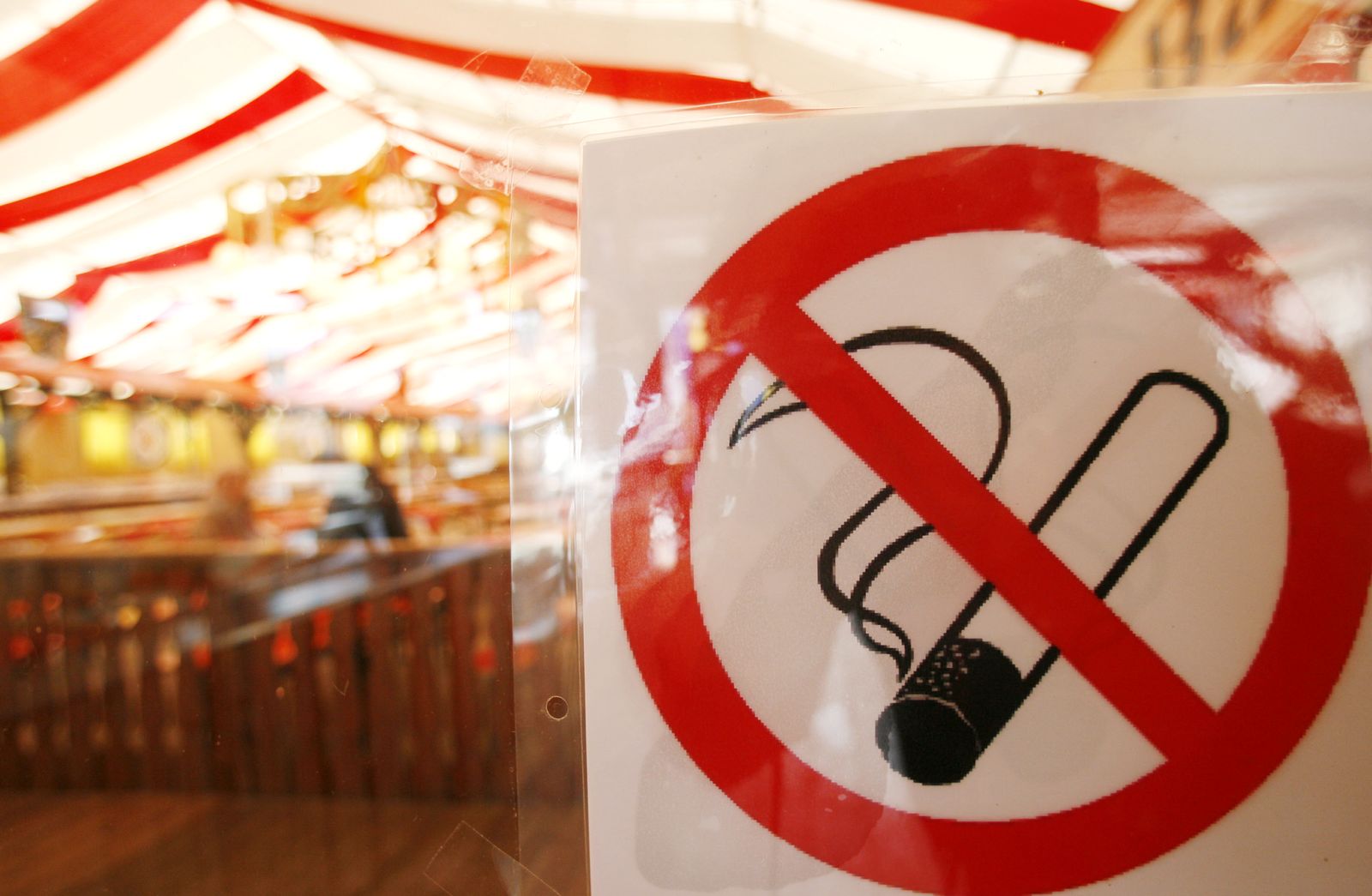 Cigarettes will no longer be tolerated at Oktoberfest -- or any other place where you can buy a beer in Bavaria.