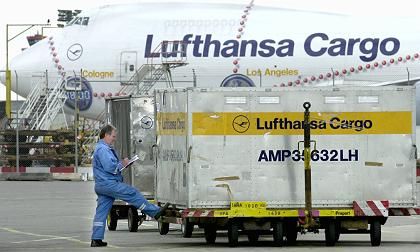 Is Russia strong-arming Lufthansa Cargo into opening up a hub in Siberia for its Asia flights?

The Kremlin on Friday may have temporarily lifted its ban on Lufthansa Cargo on overflights of Russian territory, but the crisis remains unresolved and Moscow's motives for restricting the firm's flights remain as unclear as ever.

Some commentators believe Sunday's move by the Russians is merely an effort to extract higher overflight fees from European airlines, while others see it as direct pressure aimed at forcing Lufthansa Cargo to establish a Russian hub for its global logistics business.

The ban on overflights in Russia forced Lufthansa to temporarily reroute 49 connections -- an expensive and time-consuming task for a company whose business model is predicated on the fastest possible global deliveries. Previously, the company's flights to Japan, China, South Korea and Singapore had flown via the company's hubs in Astana, Kazakhstan and Tashkent, Uzbekistan.

Recently, though, Moscow has been lobbying hard for Lufthansa to create a new hub on Russian territory. Last week, the Russian government official asked Lufthansa to establish a Siberian hub. Timor Chikamatov, a spokesman for the Russian Transport Ministry, told Germany's Financial Times Deutschland: "We sent our German colleagues a letter on Oct. 22 in which we proposed that the company use Krasnoyarsk or Novosibirsk as a hub in the future."

But Lufthansa officials are also critical of the Krasnoyarsk airport, with a spokesman calling Russia's demand absurd and adding that the facility doesn't have the infrastructure a busy hub requires.

This week's developments have heightened tensions between Russia and Germany, despite the fact that the government in Berlin has tried to play the issue down, with a spokesman saying that the negotiations with the Kremlin were "on the right path." Fewer conciliatory tones could be heard on the Russian side, where a Transport Ministry spokesman accused Germany of starting a "media campaign accusing us of extortion."

However, the Russian Transport Ministry issued a statement Friday saying that it had extended permission for Lufthansa to fly through Russian airspace to its Astana hub until Nov. 15. But a Lufthansa spokesman told the Associated Press that the company had not received any formal notification from the Russian ministry, and reiterated that Lufthansa had no plans to use Krasnoyarsk as a hub.

On the op-ed pages on Friday, German commentators see Moscow's latest flexing of its muscles, which follows energy shutoffs in Eastern Europe and threats of a "new Cold War," as ominous.

"The significance of the overflight ban that Russia has imposed can only be understood when viewed as part of the bigger mystery of Russia's behavior in recent months. Moscow is demonstrating its regained importance, power and ability to interfere in every respect -- in international politics, the energy sector and now in worldwide cooperation in air transportation."

"A country can defend itself against such blackmail attempts, which go far beyond money, if it has countermeasures at its disposal. And that happened in this instance, too. The German Transport Ministry temporarily withdrew overflight and landing rights for Russian airlines. But this is also where the German scandal in this story begins. The transportation minister barely had time to announce the suspension before he was forced to withdraw it -- evidently following the intervention of Kurt Beck, chairman of the national Social Democratic Party (also part of Chancellor Angela Merkel's coalition government). In this case, though, Beck was acting in his role as governor of the state of Rhineland-Palatinate. His concern is Hahn Airport, about 90 minutes from Frankfurt, which has given an economic boost to his state. But Hahn's boom is for the most part driven by two customers: budget airline Ryanair and cargo jets from Russia's Aeroflot."

"A federal minister should be able to tell whether a decision will involve a few euros or rubles or whether it threatens Germany's capacity to act on foreign policy. And the chairman of a national political party that is part of the government should have enough far-sightedness to see that there are more important things than state structural development aid. This isn't some small-town knitting circle: This is a political failure with wide-reaching implications."

"From the outside, it's hard to identify the real reasons for the overflight ban that Russian authorities have imposed on Lufthansa Cargo. It's probably an attempt to extract greater fees, but it could also be an attempt to pressure airlines to rethink their transport networks and to give Russia greater consideration."

"One thing is certain though: Overflight fees have long been a point of contention. European airlines are forced to pay Russia a total of €300 million each year for overflight rights in Siberia. The EU considers the practice illegal and has pushed for its elimination. Russia has agreed, at least in principle, to drop fees by 2012. But nothing has been signed yet, despite the fact that the Europeans made this an official precondition for Russian membership of the World Trade Organization."

"Russia's ambitions to better integrate itself into the international economy would be well served if it finds a fast solution. ... For it's part, Lufthansa Cargo will have to wait out the storm. It has no real alternative other than to route traffic through Russia. And its business in Asia is far too important for it to simply reduce its number of flights."

"The case demonstrates yet again that legal protection for foreign firms doing business in Russia has not grown -- at least not when the state is involved. The head of the board of directors at Aeroflot, which collects part of the overflight fees, is a former colleague of Putin's in foreign intelligence and a high-ranking member of the Kremlim today. That doesn't automatically prove that there are machinations against Lufthansa from the highest levels. But it does underscore that there can be no foolproof protection from abrasive (Russian) measures. In the long term, though, Russia's actions could turn out to be an expensive burden on business ties between Moscow and the West."