Chancellor Angela Merkel has joined a chorus of criticism of Bundesbank board member Thilo Sarrazin for claiming in a book released on Monday that Germany is in decline because of its Muslim immigrants. Merkel said in a television interview on Sunday that Sarrazin's choice of words in the integration debate was "completely unacceptable."

"He is making a discussion of these issues much more difficult," Merkel told the German public television station ARD. "The words being used here divide society."

Sarrazin, a member of the center-left Social Democrats, provoked further criticism at the weekend by saying in a newspaper interview that "all Jews share a certain gene."

Sarrazin, a former minister of finance for the city-state of Berlin, has repeatedly caused controversy by criticizing Turks and Arabs in Germany. The latest controversy has led to renewed calls for him to be sacked from his Bundesbank job and evicted from his party.

In his book, Sarrazin argues that Muslims undermine German society and that young Muslim men are aggressive due to sexual frustration.

Some media commentators call Sarrazin's comments racist, divisive and misguided and one even draws parallels between his book and Hitler's "Mein Kampf." But others direct their criticism more at his choice of words, and voice qualified agreement with the points he makes.

"Sarrazin says Germany is endangering its future because it has allowed too many poorly educated immigrants into the country. Efforts to combat the poor education and cultural segregation are in vain, he says. A single man can allow himself such fatalism. But a society must not succumb to such tempting simplifications (). Germany needs its immigrants -- highly qualified ones and the less skilled ones who are here in the second and third generations. The decline in the birth rate is too dramatic to allow a large proportion of youths of Turkish and Arab origin to leave school without qualifications."

"Business federations have long been pushing for increases in the immigration of highly qualified people. They should also be pushing the government to stop the drift of immigrants of the second and third generation into 'parallel societies.'"

"He is without doubt a racist. Unlike other opponents of Islam, Sarrazin doesn't just believe in a 'clash of cultures' and voice shrill warnings about 'over-alienation' by Muslims. He goes further by attributing cultural and social differences mainly to genetic dispositions. By voicing this nonsense Sarrazin has finally crossed a red line. The general outrage coming from Angela Merkel, the Central Council of Jews and all political parties is as understandable as it is justified."

"The case of Sarrazin raises difficult issues: What should be done if 65 years after the banning of 'Mein Kampf' another treatise of racial theory turns into a bestseller in Germany?"

The newspaper says that Sarrazin should be thrown out of the Social Democratic Party and fired by the Bundesbank. "That would make it clear that Germany has learned from its history."

"He is right on many counts. () One has to be appalled at a growing, passive-aggressive underclass, about miserable educational achievements and also about Turkish and Arab immigrants who refuse to integrate and to get an education. Even if many people claim that all this has long been known, nothing has been done. We still lack the political will to tackle this unpleasant conflict.

"It is hard to activate the underclass, to create a positive, productive mood. One has to be tough and honest, but one mustn't argue in static technocratic terms like Sarrazin. And one has to stay optimistic. Bitterness and fatalism are poor advisers."

"The hobby author Sarrazin is responsible for risk control in the most important central bank of the euro zone. Such an office cannot seriously be carried out by someone who no one takes seriously anymore in the financial sector." 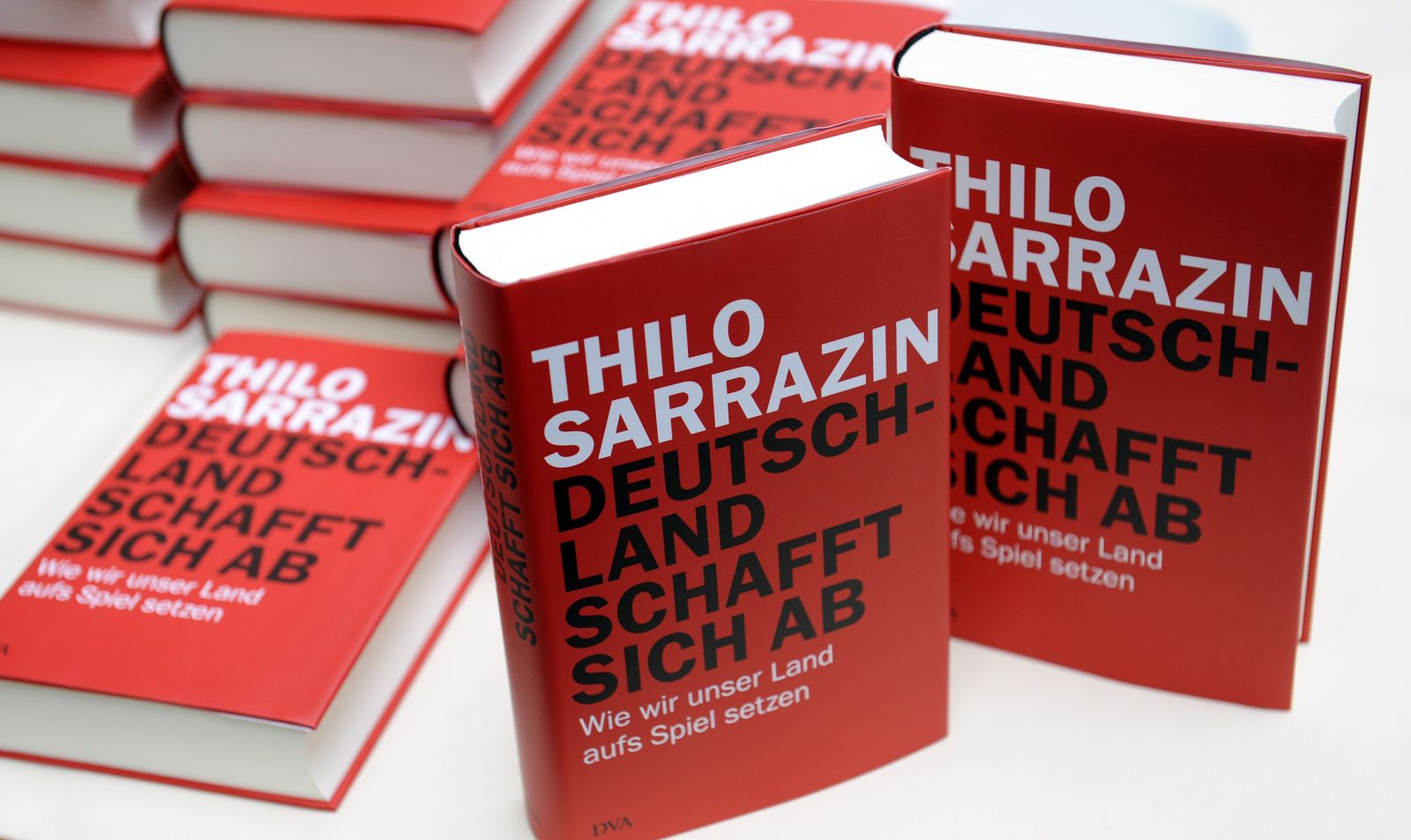 Sarrazin's new book: "Germany Does Away with Itself: How We Are Gambling Away our Country."