The scandal surrounding Christian Wulff gets murkier by the day, but the German president is refusing to resign from the largely ceremonial position, despite growing calls for him to quit. On Monday, his lawyer even went on the offensive.

At the crux of the affair is a message that Wulff left on the voicemail of Kai Diekmann, editor in chief of the powerful tabloid Bild, on Dec. 12. The newspaper claims that Wulff wanted to prevent the publication of a damaging story about a private loan that Wulff took out. Many Germans regard Wulff's alleged threats as an attack on press freedom. For his part, Wulff insists that he only wanted to delay the publication of the story. In a high-profile television interview last week, Wulff admitted he had made a "serious mistake" by phoning Diekmann but denied he had considered resigning.

Last week, Bild said it wanted to publish the actual message as support for its version of events, but asked Wulff for his permission to make the voicemail public. The president denied the request. But on Monday, Wulff's lawyer, Gernot Lehr, said in an interview with Deutschlandfunk public radio that the president was not afraid of the message being published. If Bild "wants to do so, then let them," he said. "It is Bild's business if they want to break this taboo."

In its new issue, published Monday, SPIEGEL printed lengthy extracts from the message, after obtaining a transcript. According to the transcript, Wulff did indeed ask the newspaper to delay the publication of the story. He also, however, threatened to take legal action, which observers see as a clear attempt to stop the article's publication.

SPIEGEL also reported on a second message that Wulff left on the voicemail of Mathias Döpfner, CEO of Axel Springer AG, which publishes Bild. According to sources at the publishing house, the tone of the message was similar to the one he left Diekmann. Wulff apparently expressed anger at Bild and spoke of a campaign against him. When Döpfner called Wulff back, the president was reportedly very indignant. According to the sources, Wulff said that if the article about his private loan was published, it would mean war between the president's office and the Springer publishing house until the end of his time in office.

As part of its cover story on Wulff, SPIEGEL also reported on another controversy involving links between Wulff and Wolf-Dieter Baumgartl, a businessman who is head of the supervisory board of the Talanx insurance group. In 2008, Christian Wulff and his wife spent a vacation at Baumgartl's villa in Tuscany without paying. According to SPIEGEL, while Wulff was governor of the state of Lower Saxony, he had lobbied on behalf of the insurance sector and had spoken of his services to the industry in a 2005 speech. Baumgartl was present at the event and was greeted personally by Wulff.

Wulff has been repeatedly criticized for his apparent close friendships to prominent entrepreneurs. In 2010, Wulff came under fire for spending a vacation on the Spanish island of Mallorca on an estate belonging to another well-known German entrepreneur, Carsten Maschmeyer.

Meanwhile, parts of the German political establishment have already turned to the question of what will happen if Wulff steps down. On Sunday, the leader of the opposition center-left Social Democratic Party (SPD), Sigmar Gabriel, offered Chancellor Angela Merkel help in a possible search for a successor. He said if the parties could agree on a joint candidate then the SPD would not put forward its own candidate. Merkel would probably be dependent on opposition votes in the Federal Assembly, the specially convened body that elects the German president, if it came to an election. The chancellor narrowly avoided a debacle in 2010, when her handpicked candidate Wulff needed three rounds of voting to get elected, despite the government's majority in the assembly.

Merkel's conservative Christian Democratic Union (CDU) strongly denied media reports that they had been holding talks with their coalition partners, the Bavarian Christian Social Union (CSU) and the business-friendly Free Democrats (FDP), about the best course of action should Wulff step down. Government spokesman Steffen Seibert said on Monday that Merkel saw no reason to address the issue of a possible resignation by Wulff.

On Monday, German editorialists look at the implications of the Wulff affair for Merkel and her government.

The financial daily Handelsblatt addresses the reports that Merkel is already searching for a replacement for Wulff, which her office has strenuously denied:

"It was Merkel who praised her former adversary right into the president's palace. And it is Merkel who is thinking about a possible successor -- even if her coalition is strenuously denying such notions. Does anyone seriously believe that, after (the sudden 2010 resignation of President Horst) Köhler that the chancellor wants to get caught wrong-footed by the resignation of her own handpicked president?"

"So what can she do? With her coalition holding an extremely thin majority of a maximum of four votes in the Federal Assembly, putting forward another candidate to replace Wulff would be risky. This would hold particularly true if the opposition Social Democrats and Greens were to put their former candidate Joachim Gauck, who lost to Wulff in 2010 but is widely respected, back in the running. A defeat in the struggle for Germany's highest office in 2012 would send a major symbolic message for the loss of power in Merkel's coalition government. Together with the collapse of the 'Jamaica' coalition in Saarland (comprised of the CDU, the FDP and the Greens), the general withering of the FDP and the possibility of a CDU defeat in state elections in Schleswig-Holstein in May, a formidable political headwind could form that the chancellor would then have to fight during the next federal election in 2013."

"Merkel is more likely to take the lesser risk, just as she has done during the euro crisis, by buying as much time as she can and holding on to Wulff for as long as possible. The fact that the office of the president will be further damaged by that choice is part of the 'collateral damage' of her power politics. But if it does come to a resignation, Merkel could still build a new bridge to the Social Democrats -- one that might lead to a later grand coalition between her party and the SPD."

"It might seem to some people as if the fate of President Wulff is dependent on the goodwill and consent of the chancellor. According to that way of thinking, even if Wulff wants to hold on to his office, he will have to resign as soon as Angela Merkel gives him the thumbs-down. But if she remains loyal to him despite his lack of credibility, he will be able to stay. If one looks at the real power relationships, however, it's actually the other way around. It's not Wulff's position that depends on Merkel and the leadership of her conservatives. Rather, it is the CDU/CSU coalition with the FDP, and maybe even the chancellorship, that stands or falls depending on whether Wulff remains in office or not."

"Even though the CDU, CSU and FDP had a comfortable lead of almost 20 votes in the Federal Assembly in 2010, it still took them three rounds of voting to get their preferred candidate Wulff elected. Since then, their majority has shrunk to four votes, as a result of the governing parties' losses in regional elections. Merkel would never take the risk of presenting her own candidate again, should Wulff resign. She would be forced to find a consensus candidate with the main opposition parties, the center-left Social Democrats and the Greens. In that case, her junior coalition partner, the FDP, would hardly be needed. The result of a new presidential election could persuade the humiliated FDP to try one last attempt to save themselves, namely by ending their coalition with the conservatives. That would mean the end of Merkel's government."

"The opposition is right: Of course Wulff is Merkel's president. In 2010, she elevated her internal party rival Wulff, a hard-nosed political professional, into a position of power. Her political motives were clear at the time -- but the decision was a mistake."

"The Wulff affair poses one big danger for Merkel's party. Wulff's behavior challenges Christian Democrats' image of themselves. The president makes a mockery of values that the conservatives like to believe in, such as integrity, honesty and standing up for what you believe in."

"By proving day after day how little these values mean to him, Wulff exposes the cold calculation of the chancellor. Merkel may despise his antics, but she is supporting the president purely for tactical reasons. She behaved the same way with Karl-Theodor zu Guttenberg, another high-ranking conservative who turned out to be a fraud (and resigned as defense minister in 2010 following a plagiarism scandal)."

"This is a problem for the Chancellor, who moulds party policy to suit reality: Some of the CDU's core supporters will reject her strategy and her personnel decisions and stay home (at the next German federal election) in 2013."

"But Wulff's resignation would not constitute an acute national crisis, as some opposition politicians have suggested. It might be unpleasant for Merkel, but it would be manageable."

"The mercy that the president (who has the power to pardon offenders) is showing to himself is matched by the mercilessness of his opponents in their criticism of him. Their stubborn determination probably stems partly from the fact that he refuses to resign, despite being criticized for so long and with good reason."

"If the president does not resign, that may be regrettable. But if the strong feeling of regret about (Wulff's) arrogant behavior turns into a showdown between the press and the president, then that will be difficult and dangerous."

"Christian Wulff will lose this war, even if he doesn't have an enemy. He himself is the enemy. He himself organized -- or disorganized, if you will -- his life in such a way that all of these questions must be asked of him."

"Three weeks after the affair began, he has created more confusion than clarity with his answers. He has misused his tool of the trade, the word. With that, he has done himself in. Germany no longer has a president." 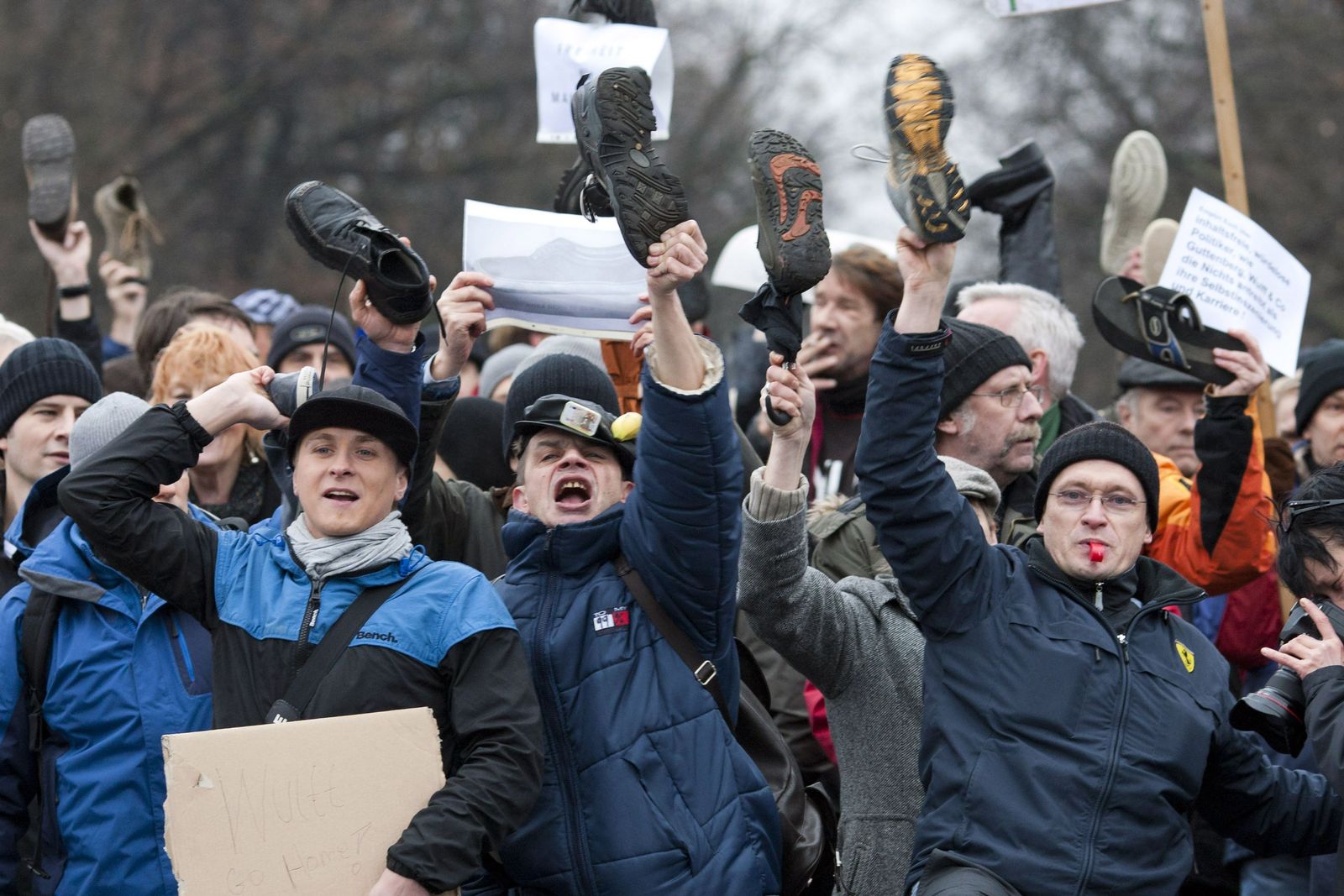 Demonstrators wave shoes as a sign of disrespect during a demonstration against German President Christian Wulff in front of his official residence in Berlin on Saturday.