Karlheinz Schreiber, the German-Canadian arms dealer extradited to Germany from Canada on Monday, was denied bail and remanded in custody by a court in the Bavarian city of Augsburg on Tuesday. He faces trial on charges of bribery, tax evasion and fraud in connection with weapons deals and a slush fund scandal that rocked the ruling conservative Christian Democrats of Chancellor Angela Merkel in the 1990s. 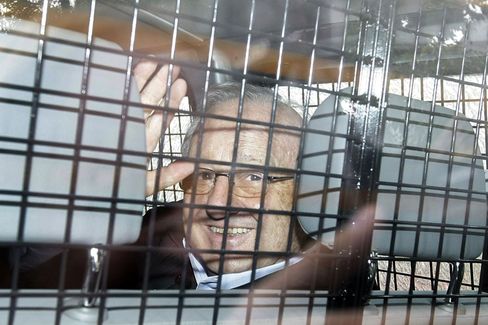 His return after 10 years spent fighting extradition is likely to be uncomfortable for the CDU because the scandal which disgraced former Chancellor Helmut Kohl and cost Wolfgang Schäuble, the current Interior Minister, the leadership of the party hasn't been fully cleared up.

But media commentators say it won't have much of an impact on the current election campaign because most of the people involved at the time are no longer politically active and Merkel has revamped the party after cleverly distancing herself from Kohl, her former mentor, in 1999. Besides, Schreiber's trial won't start until after the Sept. 27 election.

Still, the center-left Social Democrats, trailing the conservatives by more than 10 points in opinion polls, aren't unhappy about Schreiber's return. Asked to comment, SPD leader Franz Müntefering replied in his typical down-to-earth fashion: "We don't have to do anything. It stinks elsewhere. We just have to make sure that people realize where the scent is coming from."

"The looming trial of Schreiber won't influence the election campaign much. Excavating the dirt of the old CDU won't hurt the CDU of Angela Merkel. The Chancellor can point out that she turned her back on Kohl in 1999 with a spectacular public statement. That has absolved her, it was her biggest coup and she's still benefiting from it to this day. The days when the SPD could benefit strongly from the CDU donations scandal are over."

"Ten years ago Schreiber's appearance on German soil would have triggered a political earthquake, five years ago it would still have been a minor sensation. Today the excitement is limited, even among politicians. No one among the conservatives is happy that Schreiber's extradition during the election campaign of all times has conjured up the ghosts of the donations scandal. And no one in the SPD is unhappy about it. But the trial of Schreiber comes too late. The people who were active in the CDU donations scandal have long since left the political stage, apart from Interior Minister Wolfgang Schäuble."

"Schreiber is unlikely to provide urgently needed insight into what happened. It's totally unclear whether he knew details of the CDU slush funds, whether he'll give testimony on that and whether his statements can be trusted. Schreiber is known to crave attention and he's an unreliable witness. Only the CDU itself could make a fresh attempt to uncover what happened. Under Merkel's leadership it has transformed and modernized itself and has forcefully distanced itself from parts of its past. The party would now be ready to to cope with examining the dark chapters of its recent history."

"The Schreiber case won't decide the election but it's still uncomfortable for the conservatives. They're planning ceremonies to mark the 20th anniversary of the fall of the Berlin Wall and Helmut Kohl, who has recently recovered from illness, is to play a big part in those ceremonies. It's problematic if his role as the great Chancellor of Unification gets pushed into the background as everyone gets reminded of his role as secret donations collector and lawbreaker."

"It would be good if we now at last get a proper trial that clarifies what happened and that isn't obscured by deals. One would love to know why he made a donation of 100,000 deutsche marks and had it passed on to Wolfgang Schäuble, the head of the CDU/CSU parliamentary group at the time and current interior minister.

"Over his years in exile in Canada, Schreiber liked to think he had a key role. It speaks volumes that he even thinks the Social Democrats won three elections because of his case. His trial will nevertheless bring new accusations to light and it remains interesting -- because it's about political lobbyism and the limits to it. But it's not an election campaign bomb that will trigger a new quake."

"Apart from Schäuble, no protagonist remains active, and the interior minister paid a politically high price for the scandal surrounding a 100,000 deutsche mark donation -- even his opponents will concede that. His contamination even robbed him of the opportunity to become German president. It's unlikely that Schreiber will rock the nation -- or even the conservatives -- after his enforced return."