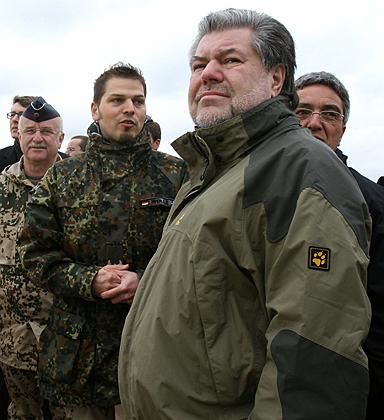 Social Democrat leader Kurt Beck was in Afghanistan over the weekend. And he's got an idea.

It was a suggestion that almost immediately drove a wedge into Germany's governing coalition. Kurt Beck, head of the junior coalition partner Social Democrats (SPD), finished off a trip to Afghanistan on Sunday by presenting his own suggestion for how Afghanistan might be pacified once and for all: Why not invite all parties involved in the conflict to Berlin for negotiations?

Sounds reasonable enough, perhaps -- especially given that violence in the region is on the increase as the Taliban steps up efforts to battle Western troops. But in Berlin, the proposal was almost immediately seen as a suggestion that the West sit down at the table with pro-Shariah, radical Islamists. And it didn't take long for Chancellor Angela Merkel's Christian Democrats to begin sharply upbraiding Beck. The SPD leader "didn't think it through properly," said CDU foreign policy expert Ruprecht Polenz, a sentiment echoed by CDU foreign policy speaker Eckart von Klaeden. Others likewise joined in the cacophony of criticism.

Beck received support from his own party and also from the Greens. But given the severity of the reactions in Berlin, he backed down a bit on Tuesday. "One should investigate whether it is possible to come to an agreement with moderate and conciliatory powers," he said before adding that negotiating with murderers is an impossibility.

Still, the clumsy proposal has left the impression in the minds of many that Beck wants to negotiate with the Taliban. It is a topic that German commentators have been eyeing throughout the week -- and on Wednesday, they pounced.

"By now, we know the destruction the Taliban has caused and what they are capable of. One can't resent them for wanting to regain power. But inviting them to a round table to give them the possibility of contributing to the solution of a problem that they themselves caused shows an irrationality that borders on voodoo. Next, Kurt Beck could suggest involving drug dealers in the fight against the drug trade and asking brothel owners how best to contain forced prostitution.

"On the other hand, it would be interesting to see just what an Afghanistan conference which included the Taliban would look like and what would be discussed. Whether one should stone or merely shoot adulteresses? Whether thieves should have just one hand chopped off or both? And how many lashes those who listen to music should receive?"

"The world has been trying to help Afghanistan for six years. The destruction following the civil war is huge while the steps toward reconstruction have been small. Likely, that's because nobody asked Kurt Beck. The SPD boss, during his first visit to Afghanistan, didn't even need three days to develop an idea: A peace conference, maybe even in Germany, and maybe with Taliban participation."

"There is a reason for the breathless speed with which Beck is currently developing foreign policy concepts. The skepticism in Beck's party regarding the engagement in Afghanistan is growing. In the autumn, the extension of the mandate is up for a vote and the SPD's credibility is at stake. Those who have a reputation as a party of peace cannot show too great a respect for diplomacy."

Surprisingly, the center-right Frankfurter Allgemeine Zeitung doesn't blast Beck for his proposal, but rather upbraids him for the way he went about making it:

"There can be no peace in Afghanistan -- as in Iraq -- without the attempt to bring moderate powers among the insurgents into the fold. Western powers have come to that same realization, not least because their diplomatic and military representatives on site are insisting on it. But the proposal should come from those involved and should only be publicly discussed after discreet preparations have already been made. It could be that a peace conference  emerges as the best formula. But a German party leader in Kabul should not be the one to introduce such an idea."

Conservative daily Die Welt also has a few suggestions for how Beck should have behaved during his visit to Kabul:

With his suggestion, Beck "grants the Taliban -- or their ostensible moderate elements as was later added -- a political status that they have not earned. The primary goal in the country is not conciliation, but that of suppressing the Taliban in the south and stabilizing the more-or-less secure conditions in the rest of the country. That is the tremendous challenge that the ISAF troops are trying to meet on a daily basis -- a challenge that necessarily has a military component. Well meant reconciliation proposals that come from far, far away are out of place."

The left-leaning Berliner Zeitung on Wednesday is one of the few voices to actually take a closer look at Beck's proposal:

"The international community made a grave mistake by not having included the moderate Islamists in the pacification process. Had some of them been at the table during the first Afghanistan conference in Bonn in 2001, the situation would perhaps not be as muddled as it is now. But at least there is the opportunity to not repeat mistakes made in the past. It could be Afghanistan's last chance."

"The existence of radical Islamists is a fact in Afghanistan and it will stay that way. This part of society may have a peculiar mentality, but it can't be simply bombed away. Trying to negotiate with this part of the society has nothing at all to do with appeasement. Rather it is recognition of reality."