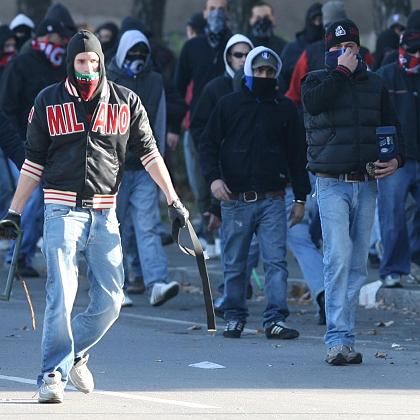 Milan fans in Bergamo on Sunday. The scourge of fan violence reared its ugly head again this weekend.

Italy is scrambling to deal with the aftermath of riots this weekend sparked by the accidental shooting of a football fan. State prosecutors said Monday that hooligans who went on the rampage on Sunday could be charged with "acts of terrorism," according to RAI 1 state television, due to the extreme-right political background of many of the rioting supporters. They could also be charged with "apology of fascism" -- a penal crime in the country once ruled by Benito Mussolini.

Officials detained four people in Rome Monday and jailed eight in Bergamo after fans there kicked in a glass barrier, causing a football match to be called off.

Many of the hooligans belong to the so-called Ultras, who use far-right slogans and banners and are accused of using soccer as a pretext to cause mayhem.

The violence that spread across Italy was in reaction to the death of Gabriele Sandri, a 26-year-old DJ, who was killed after police officer Luigi Spaccatorella fired warning shots to stop a brawl among rival fans at a motorway rest stop. The policeman is now under investigation for manslaughter.

However, according to Clarence Seedorf, a player with AC Milan, football is being made a scapegoat by the government for deeper problems in Italian society. "They cannot blame football every time," the Dutch player told Britain's Sky Sports News. "The people are not happy. They are coming to the stadiums to express their feelings and their feelings are not positive.  The whole country lacks leadership."

The German press on Tuesday looks at the implications of the fan violence for Italian football, society and politics.

"The Italians are always caught up in a power struggle. Nothing in that country has a secure position -- not the parties which are constantly splitting up and being refounded  not the institutions which pass from the clutches of one party to another, not the church which wants to control domestic politics."

"Under these circumstances, radical football fans also form a group that, without prospects of winning the big trophies, look for a monopoly of power in their narrow world, which they then want to present to the rest of the country."

"The fact that state prosecutors in Rome are now accusing the mobs from last weekend of terrorism shows the shock in society. But is this terrorism? Certainly a social problem has become a political one. In other European countries projects aimed at fans have had good results, and they should be attempted in Italy. Indeed, the state's latest successes against the mafia in Sicily show that civil society can be articulate if it sees its interests represented by the state."

"(Sandri's) death had little to do with hooliganism -- and a lot more to do with the Italian police, who are far too relaxed in the way they use their weapons."

"Italy's hooligans have already given their verdict: they chant 'murderers!' in the stadiums. With its grotesque reaction the state has enflamed the mood more than if it would have if it had just let the games be played. The escalation has reached a new level: now there is a united Ultra front -- one that has never been seen in Italy before -- against the 'enemy state.' And both sides have their own martyrs: hate and fear will always be present when the police and the hooligans face each other."

"The state may have managed to make stadiums more secure, but the problem has just shifted to the areas around the stadiums. It is a sign of the deep failure on the part of the state and the football clubs that while the criminal Ultras have not been reined in, the normal fans feel the increasingly tough security measures are pushing them into the same boat. Italy may be the world champion, but it looks like its football could become a ghost sport played in empty stadiums."

"Italy likes to call itself the bel paese, the beautiful country. But there is another side to Italy: the ugly side."

"It was as if the radical part of Italy's football world had just been waiting for (Sandri's death). A few hours later violent demonstrations broke out in Bergamo, Milan, Rome and Taranto. The number of the rioters wasnt big but that meant their actions were all the more militant. There was deep-seated hate at work, that was about much more than the immediate provocation. It was directed against the state and its institutions -- and that quickly came to the fore across Italy."

"Football stadiums have long been places that attract people who flirt with far-right symbols and ideas and that are looking for the murkiest mass experience. While hooligans dont act that differently elsewhere, the rage in Italy is particularly apparent.  The fact that this kind of rage can flare up so quickly across the whole country is an indication that there is something rotten in the state of Italy."

"What began as a brawl between football fans in Tuscany could lead to the fall of the already crisis-ridden Italian government."

"Giuliano Amato, Italy's interior minister, has said he carries the political responsibility for the death of the fan, who was shot by a police officer. The fact that it was a tragic accident can minimize the guilt of the shooter. But that doesnt absolve Amato from the fact that the security forces operate in a chaotic manner, and that the one stray bullet led to riots by thousands of thugs in several cities."

"The Ultras have power in Italian football, they are not social losers like those who rioted in the French suburbs in 2005. And they dont hesitate to use blackmail tactics that they learned from the mafia. The politicians' fear of tackling them is the real scandal."

"If Amato resigns then Romano Prodi's center-left government could break apart. Amato has been one of its few supporters. But the end of the government would only be the smaller problem, in comparison to the effect of unrestrained football fanaticism on Italian society."