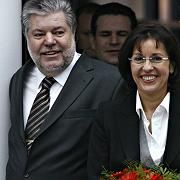 SPD party leader Kurt Beck has given Andrea Ypsilanti, the head of the SPD in Hesse, the green light to cooperate with the Left Party.

Until last week the center-left Social Democratic Party had steadfastly refused to even consider cooperating with the Left Party -- made up of former East German Communists and onetime Social Democrats -- in western Germany.

"In the west this party consists of flesh from our flesh, of people who left us because they were disappointed about our reform agenda and whore ready to make utopian promises to get elected," Beck said in a radio interview in January. "One cant cooperate with such a party."

The Left Party was formed in 2005 through the merger of the Party of Democratic Socialism, the successor to the Communist party that ruled East Germany, with a western political group made up largely of former SPD members. 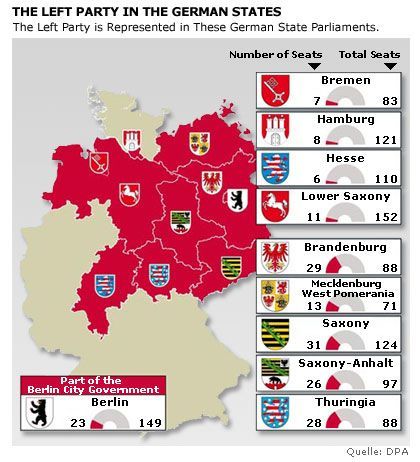 Germany's map is turning red with the Left Party now represented in 10 of the country's 16 federal states as well as the federal parliament.

It's that western arm of the Left Party the SPD had objected to because it is less well-organized and less predictable than the former Communists in eastern Germany, with whom the SPD has shared power in the Berlin city parliament since 2001.

However, the Left Party made remarkable strides in the west in recent months. It has managed to vault the five-percent hurdles to enter state assemblies in four western states including Hesse, where the SPD now needs the support of the Left Party to unseat conservative governor Roland Koch following an inconclusive regional election outcome in January.

So Beck made a decisive U-turn last week by no longer completely ruling out cooperation with the Left Party in Hesse, and the party's leadership has grudgingly backed his new policy even though some on the SPD's right wing are warning that it will undermine credibility and hurt its chances in future elections.

The verdict of German media commentators is predictable, with the left-wingers saying Beck is merely showing pragmatism in responding to a changed political environment. The conservative papers accuse him of breaking his promise and undermining himself and the SPD.

Mass circulation daily Bild plays the story for all it's worth, running the banner front page headline, "SPD Decides to Break its Promise," while the center-right Frankfurter Allgemeine Zeitung writes:

"The new edict that every regional party organization is free to decide (about cooperating with the Left Party) is just a compromise designed to paper over fundamental debates on policy and personnel. The compromise will last for now, and perhaps for the rest of the year. But after that, power struggles will break out between the left wing and the pragmatic wing of the SPD about its relationship with the Left Party."

"SPD leader Kurt Beck declared last year that there must be no cooperation with the Left Party in the west. But at the time he said that the party wasn't represented yet in a single parliament in the west and the SPD was convinced it never would be. The situation now is different, the Left Party is being elected into state parliament after state parliament, and the question about whether to cooperate with them can arise after every new election. It's legitimate that the SPD should respond to that and adapt its policy to the real world."

"The course of the SPD from here on is unclear. If it's no longer taboo to use help from the Left Party, does this mean making policy concessions to them isn't taboo either? Is the SPD now really shifting to the left, something that so far has been more an accusation by their political opponents than true fact?"

"By changing its strategy toward the Left Party, the SPD is well on its way to scuttling itself in the general election in September 2009. The current behavior of Kurt Beck is likely to deter many potential SPD voters. But the political signal would be even more devastating if [Hesse SPD leader] Andrea Ypsilanti allows herself to be elected governor of Hesse in April with the votes of communists, polarizers and left-wing radicals."

"The SPD stands to gain support on the left edge of society but the potential for losses among skilled industrial workers, engineers and white-collar employees is two to three times higher. What we're seeing is tantamount to suicide in the Social Democrats' center ground."

"In past general elections the SPD always did well when it was able to appeal to the middle class as well as to its own clientele (...) Even large parts of the SPD leadership know that the new readiness to cooperate with the Left Party won't help the party win elections at the national level."