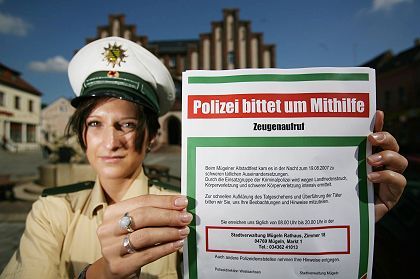 The police in Mügeln is asking for help in tracking down those who chased eight Indians through the town on Saturday night.

Aftershocks from last weekend's attack on eight Indians in the Eastern German town of Mügeln just keep on coming. On Friday in Meseburg, where Chancellor Angela Merkel and her cabinet were camping out to plan for the next two years of governing, Family Minister Ursula von der Leyen -- whose ministry is responsible for combating neo-Nazi extremism -- was criticized for not doing enough to combat right-wing violence. Minister Wolfgang Tiefensee, responsible for programs aimed at rebuilding former East Germany, said she had done a poor job managing programs aimed at curbing extremism.

Not to be outdone, Social Democrat head Kurt Beck likewise accused von der Leyen of not doing everything possible to fight neo-Nazi violence. Beck also called for the far-right National Democratic Party of Germany (NPD) to be banned. "We've had enough of this malignance," Beck said, in reference to the far right. "Let's gather all of our strength so that right-wing extremist ideas don't gain influence in our country."

In Mügeln, meanwhile, police said they are investigating two further suspects, in addition to the two already under arrest. They are suspected of having been part of the mob that, on Sunday, chased eight Indians through town before beating them up. Witnesses say the mob was shouting "Foreigners Out!" and many suspect the attack was racially motivated. Mügeln announced on Friday that it was holding a prayer for peace and against xenophobia on the town square this weekend.

German commentators on Friday once again take a look at the incident, and this time, they are taking aim at politicians in Berlin.

"Dear Politicians," is the headline on a commentary in the Financial Times Deutschland. The author takes exception to German politicians having demanded this week that German citizens show more "civil courage" -- a concept in Germany which carries connotations of jumping in to help stop right-wing violence:

"Should I tell my three children that they have to get in the way when a company-sized lynch mob races through the streets? Do you mean that seriously, my dear politicians? Then let me tell you something: I'm not going to lift a finger  When my children ask me what they should do when 50 neo-Nazis beat the tar out of eight Indians, I'll say, "Take your mobile phones and call the police immediately!"

"Yes, my dear politicians, the police. You know them. They are the friendly, uniformed people with the blue light on their cars that always escort you when you're on the way to a banquet in your constituency. And why should one call them? Because they don't just protect politicians from attackers, but they are also there to protect foreigners from right-wing extremists. That's their goddamned duty -- and their job."

"Let me tell you one thing, my dear politicians: When some areas of Germany are no longer safe for foreigners, and when you no longer see the state's duty to protect people from other people as part of your jobs, then I won't accept that. Do you understand? You are responsible for security in this country. That is your goddamned duty -- and your job."

"Who or what is the relativism surrounding the Mügeln case supposed to help? Peace in the country? Eastern German feelings? The governing coalition? Wolfgang Tiefensee, responsible for Germany's eastern states, spoke of 'an intolerable excess of violence.' Haven't we known and tolerated for years the fact that violence against foreigners is part of everday life in Eastern Germany? The governor of (Eastern German state) Saxony-Anhalt, Wolfgang Böhmer, called it evidence of a 'prevailing mood which is unfriendly to foreigners.' Why doesn't he just call it xenophobia? Didn't he see the bashed-in faces of the eight Indians?"

"Of course there is xenophobia in Western Germany. But only in the East is it a pervasive part of youth culture. It's only there that members of the neo-Nazi NPD party sit in two state parliaments, and a member of the extremist DVU in another. The chances of becoming a victim of racist violence is much, much greater there than in the West. No-go areas are only to be found in the East. Mügeln is run-of-the-mill Eastern Germany."

"The fight against right-wing extremism in Eastern Germany doesn't need expensive programs; it needs a paradigm shift. A culture of acceptance -- and not of the NPD and its adherents -- must replace the strategy of exclusion. If you want to contain right-wing extremism and violence in the East, you have to understand the precarious lives of those who the NPD successfully mobilizes and take their fears seriously. You have to speak with these people in their language and open up social and democratic opportunities. In the final analysis, that means these people have to be re-integrated into society."

"One will never be able to completely banish right-wing extremism and xenophobia. But if it could be at least stemmed in the East, that would be a small victory. But if politicians limit themselves to ritual indignation and symbolic programs, then the right-wing scene will continue to gain influence and the NPD will continue to gain voters. And Mügeln will not be the last small town in Eastern Germany to hit the headlines due to racist excesses."