Germany has been scratching an old itch this week. The issue of what to do with those Germans who once worked for the East German secret police, most commonly known as the Stasi, has come up again with figures released earlier in the week indicating there were still around 17,000 ex-Stasi employees in Germany's civil service. 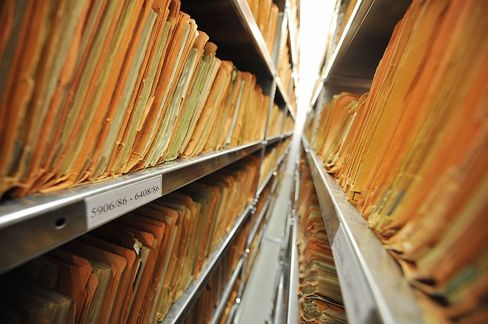 View of hundreds of files in the archives of the former East German secret police, known as the Stasi.

Even more troubling, some of them appear to be employed by the police or in various national or state offices of criminal investigation. One was even rumored to be working as a bodyguard for Chancellor Angela Merkel although this was later denied by the agency responsible. And by the end of the week those numbers were coming under closer scrutiny with some researchers claiming they are too old to be reliable and that the issue was moot.

At the height of its powers in the late 80s, the Stasi, considered to be one of the effective intelligence agencies in the world, employing an estimated 91,000 people to keep a close eye on the population in the former communist state. And hundreds of thousands more -- perhaps even as many as two million, according to some researchers -- also spied on friends, family and colleagues. The information gathered on up to 5.6 million individuals was filed at the Stasi's central catalogue and used to stifle political dissent. It also fostered a repressive climate of fear in East German communities because what the Stasi knew about you could, and most likely would, affect your educational, professional and even recreational opportunities.

So it's hardly surprising that after the fall of the Berlin Wall, the Stasi became a broad target for national resentment. And, post 1989, those working for the Stasi found their own careers severely curtailed with the introduction of background checks and closer examination of the Stasi files. Many civil servants -- police, teachers, janitors -- had to fill in questionnaires regarding any association with the former secret police. "The aim of this scrutiny," writes the German Law Journal, "was to disqualify for new positions, or terminate the on-going employment, of Stasi and high-ranking (communist party) leaders."

While criminal prosecutions were rare, thousands of former Stasi employees lost their jobs or were relegated to back offices.

But, as figures released this week in German newspaper the Financial Times Deutschland indicate, apparently not enough of them. Firstly, the various state and national organizations that apparently employ former-Stasi were criticized for being too lax with their background checks. Klaus Schroeder, a historian from Berlin's Free University who specializes in the East German regime, seemed surprised, telling reporters that, "there's more to this than anyone knew."

But now some are arguing that the figures are over 10 years old and that the issue is old news, as everything that could be done, has been. Experts also point out that in 2006 the government resolved to end regular vetting of those working in minor positions in the civil service. An amendment to legislation around the Stasi files also stipulates that from 2012 even those in positions of authority, in politics or management, will no longer have to make themselves available for security checks of this nature.

Broadly speaking German commentators say that any open debate about this uncomfortable subject can only be healthy for the nation as a whole. But, they add, the debate should be conducted responsibly and without recourse to 20-year-old prejudices.

"Twenty years after the end of the GDR it is obvious that the East has learned a lot more about West than the West has learned about the East. Even 20 years later a lot of West Germans still talk as though half of those who lived in the East were Stasi, and the other half worked for them."

"And every time someone comes out with some new figures about how many former Stasi workers are still employed in the civil service (even if these are old figures being touted as new) it brings up all those old prejudices again. Altogether, the message is loud and clear: we took on far too many of 'them.'"

"Such sweeping statements are false and dangerous and smack of self righteousness. Of course, those working with the Stasi files and making decisions on the future careers of former GDR citizens made some mistakes. But they were honest mistakes, with decisions being made on the basis of personal preference, the mood of the time, changing political standards and, more times than not, on incomplete paperwork. No doubt there were mistakes made, sometimes there were probably even huge injustices."

"Which means that today there are people in government offices who shouldn't be allowed to work there. On the other hand, there were probably also people thrown out of government offices undeservedly. It's unfortunate -- but it's too late to change. The files will never forget. But the time for using them to make decisions about employment in civil service has passed. They should only be used in special circumstances now, when someone is being evaluated for a position of authority, for instance."

"Anyone who has been working with the Stasi files knows  they show the dirty reality of the GDR, they are the last traces of a totalitarian system. These traces must be examined further -- but with sensitivity not resentment and certainly not for the sake of resurrecting old prejudices."

"Despite opposition from out of the West, the East Germans decided that the Stasi's files should not just be locked away -- even though that is what Helmut Kohl and Wolfgang Schaüble first wanted. These documents should have been helpful in outlining the inhumane methods used by the secret police and to explain why some people's lives worked out the way they did. For the most part, this chance has been wasted. The information in these files was simply considered burdensome by many employers."

"Today hardly anyone who once worked for the Stasi can be prosecuted due to employment legislation. So this is not really about whether historians can expose the amount of Stasi infiltration (into the civil service).It is about German society accounting for itself -- even if it's just out of respect for the era-shattering events that occurred twenty years ago."

"So where is the scandal? This question -- of ex-Stasi -- pops up fairly regularly. And considering this is an election year as well as the anniversary of the fall of the Berlin Wall, it was probably long overdue."

"Now it's turned up. Four and a half million people work in the German civil service. Of those, 17,000 of them once worked for the Stasi in some way, 20 years ago. The problem with this debate is not that we are having it. This is the kind of transparency that the East Germans were demonstrating for 20 years ago. The problem is the way in which the debate is proceeding."

"For example, when a leader of research into the issue who has been involved in this area for years, says there's more to this than he knew. Begging your pardon, but that sort of surprise is surprising."

"Discussion about the ex-Stasi employees is uncomfortable for many and far from their everyday reality for others. But for all concerned it is long overdue."

"Every state had its own criteria for clearing employees. But even in the 1990s it would not have been practical to throw all 190,000 of those who were at one time either official or unofficial Stasi employees out of their jobs. And it would make even less sense to throw those that are still working out now. What is necessary though, is that this topic is finally being discussed openly."

"An open discussion will show that not everyone that had something to do with the Stasi was a stalwart comrade. Sometimes it was just a little bit of contact, at other times a misunderstanding. Though of course, others will have to admit they did the wrong thing -- either because of their own opportunism or because they were persuaded somehow."

"A political debate in which there are recriminations and belittlement will only make an already difficult relationship between victims and perpetrators more poisonous."