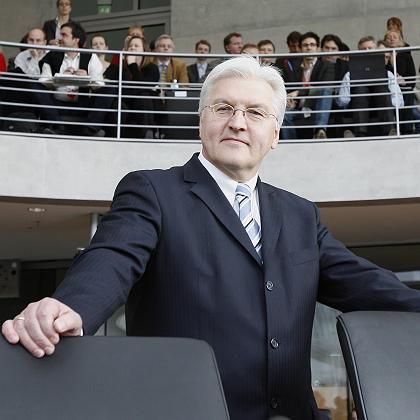 Germany's Foreign Minister Frank-Walter Steinmeier appeared before a parliamentary committee on Thursday to explain his part in the case of Murat Kurnaz, a German-born Turkish citizen who spent four years in the Guantanamo Bay prison camp. Germany had refused the man the right to return home to Germany, which probably ensured that he languished in the prison camp long after the US was convinced he was harmless. The 25-year-old was eventually released in August 2006 without charge.

Steinmeier, who was then chief of staff to the former Chancellor Gerhard Schröder, headed a meeting in October 2002 which decided that Kurnaz would be refused entry to Germany if he were released.

Kurnaz, a shipbuilder by profession, landed in Guantanamo after he was arrested in Pakistan shortly after the Sept. 11, 2001 terror attacks, and handed over to US authorites. A German parliamentary committee is currently looking into whether the German government could have done more to get Kurnaz released.

At the hearing on Thursday, Steinmeier admitted political responsibility for the case but justified his actions by saying that the security of the German people had been his priority. He said that the decision to view Kurnaz as a threat was "not only justifiable, it was necessary." Steinmeier referred to indications that he had been given by German intelligence agencies that Kurnaz intended to fight with the Taliban in Afghanistan.

Steinmeier has denied German media reports that the Americans were prepared to release Kurnaz as early as 2002. He told the committee that the US only gave the first signal that it wanted to let him go in January 2006. Before that "there was neither an official nor an unofficial offer," he emphasized.

The minister put the new willingness to release Kurnaz down to a change in the political wind in Washington, rather than the change of government in Berlin in 2005, which brought Angela Merkel to power.

The previous German government was a so-called "red-green" coalition of Social Democrats and Greens led by Schröder, who had ensured electoral success in 2002 partly by opposing US plans to invade Iraq.

The former German Interior Minister Otto Schily also testified on Thursday before the investigative committee. He said he was prepared to take political responsibility for everything his ministry had done -- which included the Kurnaz case. At the same time he denied that he had had any knowledge of the Kurnaz case, or that he had done anything wrong.

German commentators agree that Steinmeier seems to have escaped with his political skin but they are left frustrated with his testimony and the fact that accepting "political responsibility" seems to have become an empty phrase.

"In the situation that prevailed back then, the focus was on how to get people living in Germany who were 'threats' out of the country as painlessly as possible. Neither the opposition nor the media would have appreciated bringing home a suspicious Turk. Even today's opposition will find it difficult to hound Steinmeier for not doing enough to secure a release.

"Things would only get difficult for the foreign minister if his statement that there was never an offer -- official or unofficial -- from America for the transfer of Kurnaz before 2006 was undermined. Political responsibility may have no consequences -- but false statements will always be punished."

"The acceptance of political responsibility is cheap if at the same time one rejects personal responsibility ... Did Steinmeier act correctly? Legally he is out of the woods, because Kurnaz is not a German citizen. Turkey has confirmed that it approached Washington on behalf of the Turkish citizen. If he was still not released, then the US must have considered Kurnaz dangerous.

"The moral question remains: Could Berlin not have acted with more urgency for the young man who grew up in Bremen and who may have found himself taking a wrong turn in life? Steinmeier's response is that he considered security more important. After 9/11, London and Madrid, it is difficult to criticize this priority. But there is also the fact that the Social Democratic and Green politicians liked to polemicize against the US war on terror -- but then in this particular case they accepted it after all."

"Steinmeier has not cleared the fog that surrounds the Kurnaz case ... According to their testimonies, Steinmeier, Schily and the intelligence agents all acted correctly. Why then did Murat Kurnaz sit for four years in terrible conditions in the US prison camp? It could well be that security considerations initially were judged to be more important in Germany. But why did it take so long for humanitarian considerations to kick in?

"Could the red-green coalition not have secured his release much earlier? Kurnaz was released pretty quickly under Chancellor Angela Merkel. These are all questions that Steinmeier provided answers to. But the answers werent convincing."

"'Political responsibility' today is nothing more than an empty phrase. Everyone can take political responsibility for everything without it meaning anything to those who do so ... In a well-coordinated manoeuver, the Social Democratic heavyweights Otto Schily and Frank-Walter Steinmeier have accepted responsibility for the Kurnaz case. This way of taking responsibility purely out of tactical calculation empties it of any meaning. It is as if the accused were to admit his guilt in court without having to fear punishment.

"Steinmeier is out of the woods, but there are still questions: How did the information about the alleged danger Kurnaz posed materialize? Why did Steinmeier not revise his decision not to try to secure his release in the years after 2002? Why did he not believe the assessment of a German intelligence agent that Kurnaz was harmless? ... Kurnaz was not a dangerous terrorist. But he still had to rot for four years in Guantanamo, the US prison camp that the red-green coalition always castigated. And who is taking political responsibility? Nobody?"

"(Steinmeier) is today foreign minister and with his defense of the past he is fighting for his political future ... And his statement could be summarized in one sentence: I would do the same again today ... The best argument for the red-green policy against terror remains its result: The fact that, unlike many other countries, Germany has so far escaped any attacks.

"Nevertheless those who make good policies are not immune to mistakes or mistaken judgements. The fact that an innocent man sat in Guantanamo for four years is still objectively unjust. And such an ordeal cannot be justified by the initial suspicion that Kurnaz was a 'threat.'"