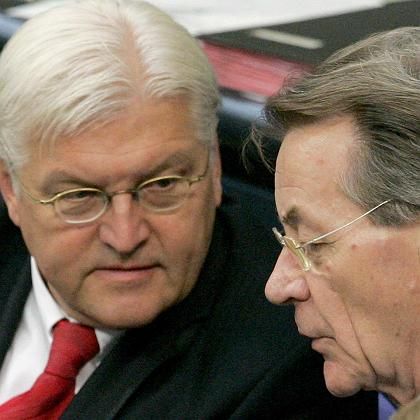 After a weekend of high drama the center-left Social Democrats are getting used to the idea of their new leadership duo. In the wake of the news leaking that the party had chosen Frank-Walter Steinnmeier as candidate for chancellor for next year's election Saturday, party leader Kurt Beck surprised many by stepping down.

It came as little surprise that Steinmeier, who is foreign minister and vice chancellor in the grand coalition with the conservative Christian Democrats (CDU), would be the candidate in the election scheduled for next September. However, the way in which the news broke in advance of a party meeting infuriated Beck. The two men had been due to make the announcement together at the SPD meeting in the town of Werder on Sunday. Beck, weakened and disenchanted by months of criticism from the media and members of his own party, reportedly declared that he didn't have the strength to carry on. His designated successor is Franz Müntefering, who was SPD leader in from 2004 until 2005.

On Monday Chancellor Angela Merkel congratulated Steinmeier on his selection as her opponent in the election, saying she was looking forward to an "exciting campaign," but criticized the way the SPD had treated Beck. She also pointed to the "deep divisions" within the Social Democrats and said that the CDU would in contrast stand for stability.

The SPD formed a coalition in 2005 with Merkel's CDU after its then leader Gerhard Schröder lost early elections. The party had seen its popularity decline sharply after introducing a number of tough welfare reforms, dubbed Agenda 2010. Its stint in the grand coalition has been an unhappy one with support plummeting to an historic low of 20 percent. Those who opposed the reforms have been attracted by the Left Party, made up of disaffected former SPD members and former East German communists. However, speculation that Beck might have countenanced some sort of partnership with the Left Party had alienated more centrist voters.

Steinmeier has ruled out any federal-level partnership with the Left Party and is likely to want to push the party back to the center. As Schröder's former chief of staff, he is associated with the Agenda 2010 reforms. Nevertheless he is the SPD's most popular politician with approval ratings only second to Merkel's.

Steinmeier said on Sunday that he would take over from Beck as party leader for the time being until the party ratifies the appointment of Müntefering, who previously served as vice chancellor and labor minister in the coalition. He left politics late last year to care for his gravely ill wife, who died of cancer in July.

On Monday the German press takes a hard look at the SPD change of leadership and few like what they see. Most welcome the move to the center but question whether Steinmeier, a man so associated with the deeply unpopular reforms, is capable uniting the deeply divided party or of winning the 2009 election.

"(Steinmeier) is as uncharismatic as Angela Merkel -- in that regard the competition between the two is interesting.  Beck certainly had no success: the party had hit rock bottom. However, his lack of success does not ensure success for those who brought him down. Steinmeier and Müntefering stand for the return of the grand coalition. They don't have any other options for staying in power. This prospect will have little attraction for voters. It is Oskar Lafontaine and his Left Party who will profit. More than ever the Left Paty will present itself as a supposedly reliable alternative for those who are sick of the grand coalition and who no longer understand the SPD."

"This doesn't look like a convincing new beginning. Frank-Walter Steinmeier will be the candidate for the chancellor, Kurt Beck resigns as party leader in disappointment and Frank Müntefering had to be dragged back into the boat."

"What is Frank-Walter Steinmeier? A rational functional politician, in whom you can still sense traces of the former official. Full blooded? More like cold blooded. He knows world politics and the political world of Berlin. He is not unlike Angela Merkel, in that he is often underestimated and seems to be a master of networking and moderation. She was Kohl's girl, he was Schröder's man. However, she has her party under control, he doesnt. He seems to be prepared to sacrifice himself for the SPD because who believes he could win next year?"

"The personnel and power questions that have long been fought over were basically decided yesterday, as well as the direction in which the party should go. 'Back to the center,' is the command.

"This, however, poses a huge risk within the party. As strong as the leadership duo of Steinmeier and Müntefering may be: They do not stand for a new beginning but rather  for the continuation of Gerhard Schröder's reform policies. Even though the dispute over these reforms has cost the SPD power and the chancellery and have brought the Left Party undreamed-of popularity, Schröder's heirs want to pick up on the very thing that brought down their mentor three years ago."

"Steinmeier is the wrong candidate for an SPD that is heading to the left. As Schröder's chief architect, he was deeply involved in Agenda 2010, something that is damned as the work of the devil by large parts of the SPD and that is blamed for the party's decline. Schröder's reform policies opened up space for the Left Party which has blossomed and thrived. Steinmeier, however, like (Finance Minister Peer) Steinbrück and Müntefering, stands for the continuation of this policy."

"By bringing back Müntefering as party leader, Steinmeier may be hoping that the party will be more united and more reliable in sticking to the party line than under Beck. However, how far and for how long will the SPD follow Müntefering, who has already been pushed out once before as party leader by the left-wing of the party?"

"For a least one whole day the SPD managed not to think about Lafontaine. He is the one who is keeping the SPD carousel of party leaders and candidates in motion and who can hang one trophy after the other on his wall."

"The SPD motto now is to look to the future rather than fight yesterday's battles once again. To stick to the basis of the Agenda 2010 but to mix it with a fresh breeze of social and educational policies. Müntefering will warm the hearts of the shrunken band of SPD members. And Steinmeier?  The once powerful man working behind the scenes is now presenting himself as affable and a good listener.  He will be a decent loser in 2009."

"The new Steinmeier/Müntefering leadership duo have to put winning the election ahead of all the internal party debates. They could complement the other, because Müntefering has no ambitions to be chancellor and ... can confine himself to loyally strengthening his partner."

"In the best case scenario, Steinmeier could become an opponent for Merkel to fear. He has integrity, seems to be unflappable, competent and pleasant. However, he has no experience of waging an election campaign, he has not even fought a campaign for his own seat. The sharp attack on an opponent has not been his style up to now -- but Müntefering can help out here."

"No one should expect big ideas. It will be enough if the left-wingers in the party keep quiet until the election."