When German Chancellor Angela Merkel became secretary general of the Christian Democrats in 1998, it was said she wouldn't last. There were, so went the theory, simply too many powerful heavyweights in the party for the young woman from eastern Germany to hold on to leadership for long.

When she became chancellor in 2005, it was said she would never be able to keep her government together. And those powerful bigwigs were still there, just waiting for her to stumble.

At a CDU party convention on Monday, however, Merkel was once again confirmed as the party's leader, with 90.4 percent of the vote. More than that, however, it became clear on Monday just how wrong those initial doubts about Merkel were. Not a single one of her earlier rivals remains active on the national political stage. Roland Koch, once the conservative governor of Hesse, threw in the towel earlier this year. Edmund Stoiber, the former governor of Bavaria, is now in a harmless European Union post. Christian Wulff, another CDU rising star, has taken on the largely symbolic position of German president. In June, Jürgen Rüttgers, the former governor of North Rhine-Westphalia, announced his withdrawal from public life.

Merkel's resulting confidence was on full display on Monday. She only briefly mentioned the ongoing difficulties between the CDU and its coalition partners, the business-friendly Free Democrats. Instead, she went on the attack -- particularly against the Green Party. She said the Greens, currently higher in public opinion polls than ever before, are nothing more than an opposition party, a party of protest.

"Against everything -- that is the opposite of mainstream politics," Merkel said. Then, in reference to speculation that the CDU and the Greens could ultimately form a governing coalition on the national stage, she said that such a partnership is a "pipe dream."

Indeed the chancellor, who has spent years moving the CDU further to the center of the political spectrum, seemed eager to turn back the clock. She emphasized her party's Christian roots, she emphasized conservative family values and spoke out against preimplantation diagnostics. "This country is not suffering from too much Islam," she added, "but too little Christianity."

It was, in short, a very un-Merkel-like speech. German papers on Tuesday take a closer look.

"More than a few people see Angela Merkel at the zenith of her power. What more could she possibly want? ... But her party is nervous about the approaching state elections in 2011. The presumed zenith of an Angela Merkel who suddenly wants to develop a sharper profile could reveal itself to be a cliff: A few meters further on is the abyss."

"Merkel has made several mistakes in recent months which could bring her closer to that abyss. In order to end the bickering within her coalition with the FDP, she has governed in a way which is very reminiscent of (former Chancellor) Helmut Kohl in 1996.... In the 1998 general election, the CDU lost 1.2 million votes -- and the party turned from a large mainstream party into a mid-sized mainstream party. It has never recovered."

"In the deep chasm of survey results into which Merkel's government has fallen, the chancellor resolved to show a clear profile on some issues. Her insistence on longer nuclear reactor lifespans ... was not purely pragmatism, as her speech on Monday made clear. Angela Merkel wants to present and position the CDU once again as a party which fights for issues it finds important."

"Following the departure of much of the old guard, the party is now primarily Merkel herself. Realizing her new role, Merkel has sought to reach out her hand to all and to lead the party back to unity. The best strategy to do so in the CDU is to emphasize Christianity and to focus on a clear political rival. With several regional elections approaching in 2011, including a vital vote in the southern German state of Baden-Württemberg, Merkel has opened the campaign by declaring a partnership between the CDU and the Greens to be a pipe dream. The new Merkel is something the party will have to get used to."

"The crisis of the CDU is more than just a normal dip in the polls. The party's binding force is disappearing. The CDU is shrinking, it is becoming older and, much like the Social Democrats between 2000 and 2009, it is losing members primarily in those regions where it has traditionally been strong. Their most loyal voters are staying home."

"It is apparently becoming more and more difficult to bind together the divergent interests of church-going pensioners and agnostic young entrepreneurs, of career-oriented city dwellers and fearful, slightly xenophobic workers. That is the CDU's problem."

"The CDU lies at Angela Merkel's feet, cheering and full of hope. There is little else left for the party. All their eggs in one basket -- all behind Merkel. After the departure of the powerful men who were also her constant rivals, the chancellor is unchallenged at the top of the CDU.... It is the beginning of the Merkel era." 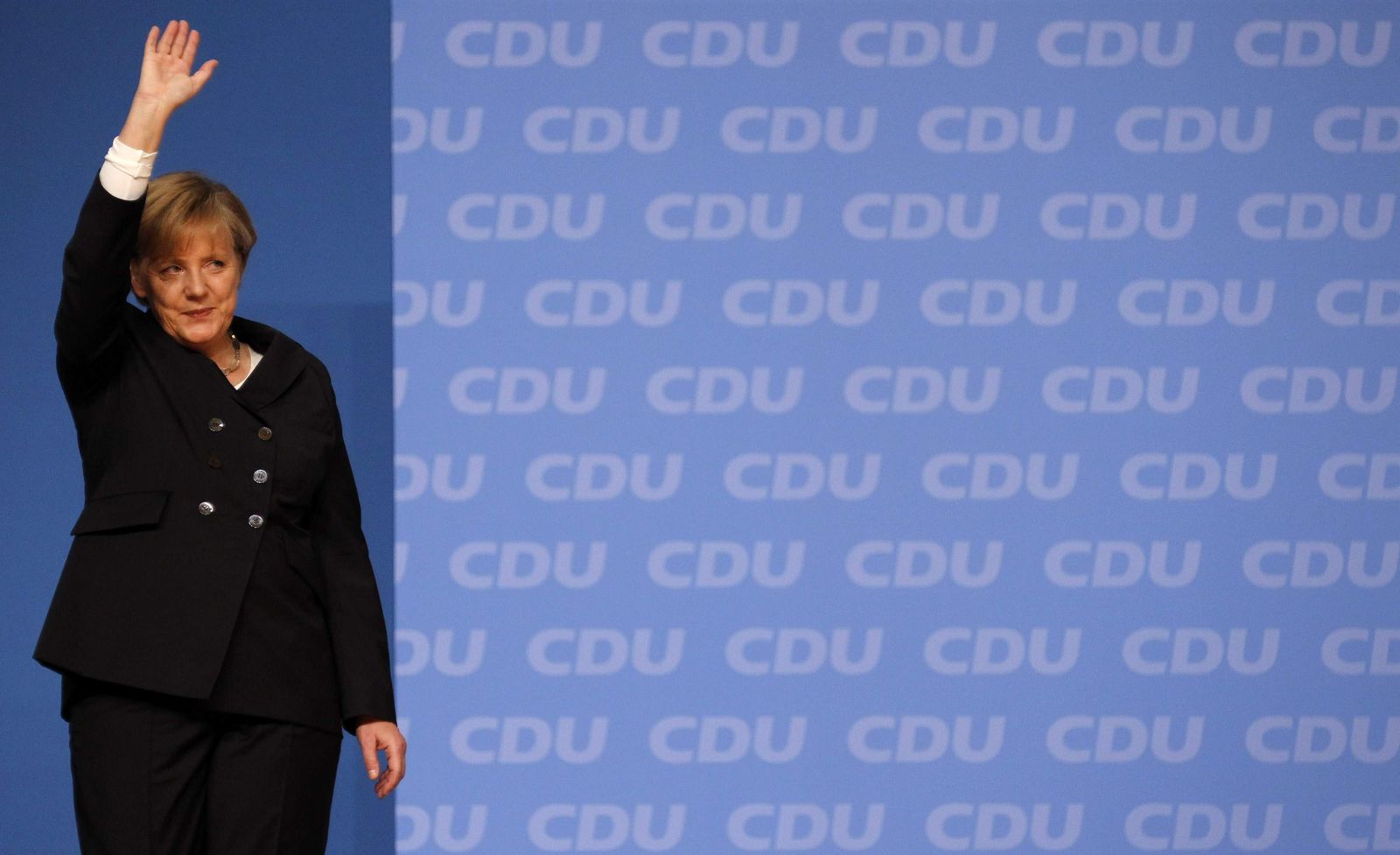 Chancellor Angela Merkel at the Christian Democratic convention on Monday.