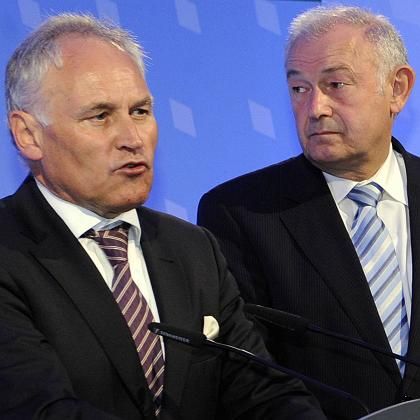 Bavaria's Christian Social Union (CSU) has woken up to a new political reality on Monday after seeing its support crumble in state elections on Sunday.

The sister party to Chancellor Angela Merkel's Christian Democrats may have ended up with 43.4 percent of the vote but in Bavaria that is the equivalent to a political debacle. The CSU has grown used to an absolute majority in state elections and a monopoly on power in Bavaria, German's largest and richest state. Only five years ago the party experienced its second highest vote of 60.7 percent.

Following the ousting of long-time leader Edmund Stoiber last year a new leadership duo was put in place but neither Governor Günther Beckstein nor CSU party head Erwin Huber have shone and supporters have defected to both the pro-business Free Democrats and the conservative protest group the Freie Wähler (free voters.) Now the CSU faces the novel task of having to court potential coalition partners.

The left, however, failed to capitalize significantly on the Bavarians' dissatisfaction with the CSU. The Social Democratic Party (SPD), despite a recent change of leadership in Berlin, saw its vote actually fall below its abysmal 2003 tally while the Left Party didn't quite make it past the 5 percent hurdle to secure seats in parliament.

On Monday German commentators for the most part welcome the end of the political monopoly in Bavaria but many also look to the likely impact of the CSU's decline on national politics. Many warn that the loss of the absolute majority in Bavaria bodes ill for Merkel's bid for re-election in the 2009 federal elections.

The center-left Süddeutsche Zeitung, which is based in the Bavarian capital Munich, writes:

"The unthinkable has happened: The CSU has not only lost its absolute majority, but it can no longer govern Bavaria without a coalition partner. Even in defeat this party is once again marked by excess. Only five years lie between (former Governor) Stoiber's triumph of winning a two-thirds majority in the state parliament and Sunday's unparalleled humiliation. The old glory is gone for good. The days when the CSU administered (Bavaria) like a vast estate and when elections merely served to document its hegemony are now over. An entire generation has grown up with the conviction that the CSU was invincible. This myth has been debunked once and for all. It is the end of an era."

"As devastating as the election result is for the new CSU leadership duo of Erwin Huber and Günther Beckstein it is good for the state and for its political culture, because it is an important step in the direction of democratic normality. In the long term democracy is damaged if one party  can establish a party monarchy; if they can act as if the state belongs to them; if they think they can afford sleaze, distasteful affairs and intrigues because they feel sure of the majority on election day despite everything."

"Bavaria is no longer prepared to give the party carte blanche.  (This) is proof of an emancipation process by the citizens from a party that has undoubtedly achieved much for its state -- but which has become more removed from the citizens the longer and more unchallenged it has governed."

"Bavaria has become more normal  Something that, 19 years after the fall of the Berlin Wall, emphatically ends the history of the old West Germany."

"The CSU disaster is something of a mystery. Five years ago Stoiber achieved 60.7 percent, the second best state election result in the party's history. However, soon afterwards the people and the party were united in wanting rid of the governor  Stoiber was pushed out of office in a putsch -- and it was done completely openly. The CSU knew that they didnt want him anymore. But they had no idea what they wanted instead. Now they are paying the price."

"The historic defeat of the CSU, however, in no way brought a victory for the left, which only managed a third of the votes.  The left has stagnated, while the parties in the camp that call themselves bourgeois are rearranging themselves."

"Bavaria shows that there is a chance for a policy that resists the temptations of the left. Anyone who wants to win must be clear and decisive. Will Angela Merkel hear this message?"

"Bavaria is finally normal  The era of a single state party is over in Bavaria. Only recently it seemed unthinkable that the CSU could lose its absolute majority. It seems obvious that the blame will be put on the shoulders of the new leadership duo of Erwin Huber and Günther Beckstein."

"However, beyond the issue of the personalities, there are structural phenomena that are also important north of (Bavaria.) It has to be acknowledged that the SPD was not able to profit from the CSU losses -- instead it slipped back even further. The (SPD) leadership pair of Steinmeier and Müntefering does not seem to have persuaded voters. That is a disaster for the Social Democrats. The professional optimists at the SPD headquarters in Berlin will naturally spin this and turn to the tried and trusted argument that a state election is not the general election. That is true. However, there is a second phenomenon here: The Greens hardly profited either. Instead almost all the disappointed CSU supporters turned to the FDP or the Freie Wähler group. The camps, therefore, remain unchanged. There is hardly any movement between the bourgeois voters and the supporters of the SPD, the Greens and the Left Party. That has also been the case since 1998 at a federal level. The prospects that the SPD could attract voters away from the CDU in the next general election are thus very slim."

"Politics will be exciting over the next few months not just in Bavaria but at the federal level. The union must now show whether the disaster in Bavaria rips it out of its lethargy or if it will go on dozing. They can no longer rely on the big win in the south balancing out weak results in the north."

"It should now be clear  that the CDU and the CSU have not yet won the 2009 federal elections, even if the SPD in Bavaria felt no Müntefering/Steinmeier effect. The worse the economic problems are perceived, the less Merkel's policy will bear up. Like Huber and Beckstein she has believed that she will be rewarded for the economic upswing. Now she will have to rush to find an alternative route to that of the two crash pilots."