It was an unusually passionate speech for German Chancellor Angela Merkel. Normally she is known for her hesitancy and tendency to hedge her bets, especially when it comes to saving the euro. But in a speech to the German parliament, the Bundestag, on Wednesday, she finally sounded like a committed European.

"The euro is much, much more than a currency," Merkel said. "The euro is the guarantee of a united Europe. If the euro fails, then Europe fails."

In her speech, which was part of a general debate on the budget, Merkel made a plea for "more Europe" and said that in order to make Europe strong and lasting, "treaty amendments can no longer be taboo in order to bind the EU closer together." She also reminded her country that a strong Europe was in Germany's interest. "In the long term, Germany cannot be successful if Europe isn't doing well too."

Her strong words came shortly after a tensely anticipated court ruling that could potentially have derailed future euro-zone bailouts. The German Federal Constitutional Court rejected several legal complaints that had been filed against Germany's participation in massive efforts to prop up the European common currency.

The court said that the billions in aid provided by Germany in loans and guarantees to highly indebted partner countries in the European Union had been constitutional. At the same time, the court stipulated that the Bundestag needed to be given a greater say in future bailout measures.

The judges ruled that aid package resolutions cannot be "automatic" and may not infringe on the decision-making rights of parliament. Aid packages have to be clearly defined, and members of parliament must be given the opportunity to review the aid and also stop it if needed, the ruling said.

In their ruling, the judges responded to three suits which had been filed in the past year against the bailout measures for Greece, which many Germans oppose.

The court's decision provides a boost for Merkel in her efforts to tackle the euro crisis. But she is not out of the woods yet. The next possible hurdle is just a few weeks away. On Sept. 29, the Bundestag will vote on reforms to the euro rescue fund, the European Financial Stability Facility (EFSF). The reforms, which were agreed upon at a July 21 summit, will allow the fund to support euro-zone banks with fresh capital and to buy up sovereign bonds on secondary markets. They need to be approved by all the national parliaments of the euro zone.

Merkel is having trouble finding a majority within her own governing coalition for the crucial vote, however, given opposition to further powers for the EFSF from some members of her conservative Christian Democratic Union (CDU) and its junior coalition partner, the business-friendly Free Democratic Party (FDP). On Thursday, the Bundestag began debating the EFSF reforms. German Finance Minister Wolfgang Schäuble urged members of parliament to support the measures in the Sept. 29 vote.

There are fears that Slovakia, which also needs to approve the changes to the EFSF, could become a stumbling block. Observers expect that the Slovak government will struggle to get a majority in parliament. The liberal Freedom and Solidarity party (SaS), a junior partner in the coalition government, is opposed to taking on liability for other countries' debts and is against the bailout fund in principle. It has called for delaying the vote until December, which would prolong uncertainty over the rescue measures.

But there was one piece of good news for European politicians on Wednesday, however. The lower house of the French parliament approved the EFSF reforms, and the upper house, the Senate, is also expected to back it in the coming days.

On Thursday, German commentators take a look at the implications of the Constitutional Court ruling.

"For the chancellor, the verdict came at just the right time. It will help the German leader in her struggle with the skeptics and opponents within her own ranks who oppose her approach to the European debt crisis -- and who have become Merkel's biggest burden, not to mention a threat to her chancellorship. They have now been deprived of the argument that the government is overstepping the limits of the constitution with its help for Greece. But that doesn't mean that the other arguments for why her chosen path is wrong and politically dangerous have also been exhausted."

"In both the debtor and creditor countries (of the euro zone), the political limits of the bailouts are becoming increasingly clear. In Berlin, everyone is now looking at the vote in late September. The chancellor, however, must surely know already that she has largely exhausted her room for maneuver."

"When the German constitution was written two years after the end of World War II, no one was thinking about a possible European Union, let alone a common currency. Hence the room for maneuver that the government has today in terms of transferring national sovereignty to supranational organizations such as the European Union is fairly limited. ... In their ruling yesterday on aid for Greece and the euro rescue fund, the Constitutional Court judges stuck to this narrow line."

"From a democratic perspective, it is necessary to have (parliamentary approval for future bailouts) -- after all, a large chunk of the federal budget is being promised as guarantees for other countries. But this somewhat narrow obligation restricts the flexibility that it was hoped the EFSF would have. After all, the fund was established after the realization that a special European summit could not be convened for every decision during the euro crisis, and that an instrument capable of acting quickly was needed instead. It remains to be seen how quickly the fund can react to market movements in the future, once the approval of national parliaments needs to be obtained."

"If the EU continues to evolve democratically, then national budgetary law doesn't need to be a legal impediment to tighter European fiscal policy any more. For that, however, a new EU treaty and an amendment to the German constitution are needed. The EU must ensure that German voters are protected from an automatic slide into a bottomless pit."

"With that, the ball is back in Merkel's court. The message from Karlsruhe is clear: If the EU and the constitution are not developed further, if there is no parliament-controlled, democratically backed economic and financial policy on an EU level and the situation therefore gets out of the governments' control, then the euro might become a constitutional problem after all."

"The chancellor now needs all of her authority to bring Europe's debtor nations back in line. Now she has Karlsruhe's backing -- but she also has the court breathing down her neck. The verdict strengthens Merkel's authority in the European Council (the powerful body of leaders of the EU member states). But if she fails there, the judges will once again put the euro to the test."

"Yesterday was a good day for Europe … Chancellor Angela Merkel, who until now has only reluctantly opposed her party's populist euroskeptic slogans, made her allegiance to Europe clear in a fiery, persuasive speech. She told the skeptics in the CDU and FDP what's at stake if the euro should fail."

"But don't let the relief over the verdict fool you: The constitutional judges only agreed to the next step, which is intended to prevent the collapse of states and banks in the short term. In order to achieve deeper European integration -- something that many in the Bundestag have said they support -- more steps are necessary: more rights for the European Parliament, a coordinated fiscal policy, jointly issued bonds. But all those things, as the new verdict has confirmed yet again, are incompatible with the German constitution. Yet these measures are essential for a stable euro. That's why politicians should create the prerequisites for the further unification of Europe by swiftly amending the constitution."

The center-left Süddeutsche Zeitung takes a look at Merkel's speech to parliament:

"Angela Merkel's appearances in parliament have always followed a certain model. Here and there she glances up at the audience from her notes, otherwise she reads her text aloud, sometimes for an entire hour. … But on Wednesday it was a different story. Her notes acted just as a prompt, and Merkel spoke her mind freely. For other politicians, this would be meaningless, but for Merkel it signaled a turning point."

"The future of the euro will also decide her future. That's why she has linked her own destiny to that of the common currency: If the euro fails, Europe fails -- and so does Angela Merkel. With that kind of thing, you can't merely read aloud from a script. You have to express yourself with passion."

"It's a high risk for the chancellor, but it's her last chance. The debate over Merkel's call for more Europe could put the peace within the coalition in danger. On the other hand, friends and enemies alike know what Merkel would like to achieve. For Merkel, it's a process of self-discovery. For everyone else in the coalition, it's a new situation: They can't grouch and complain any longer -- they have to say yes or no."

"Angela Merkel has slowly made it clear how 'her' Euroland will work, as well as where and how far she plans to go with Europe. Good. It's about time. Currently, the euro-zone countries are like car drivers who don't obey traffic laws, couldn't care less about getting a ticket and get into accidents -- putting themselves and others in danger. That's bad enough, but it's still no reason to remove the steering wheels and gas and brake pedals from every car while letting a super-control center steer every vehicle."

"Instead we need more traffic lights, a hard catalog of fines and prompt penalties for violations, maybe even including the loss of their license. In other words, the member states need to be made to align their economic and financial policies -- and Germany can be the engine that puts this in motion." 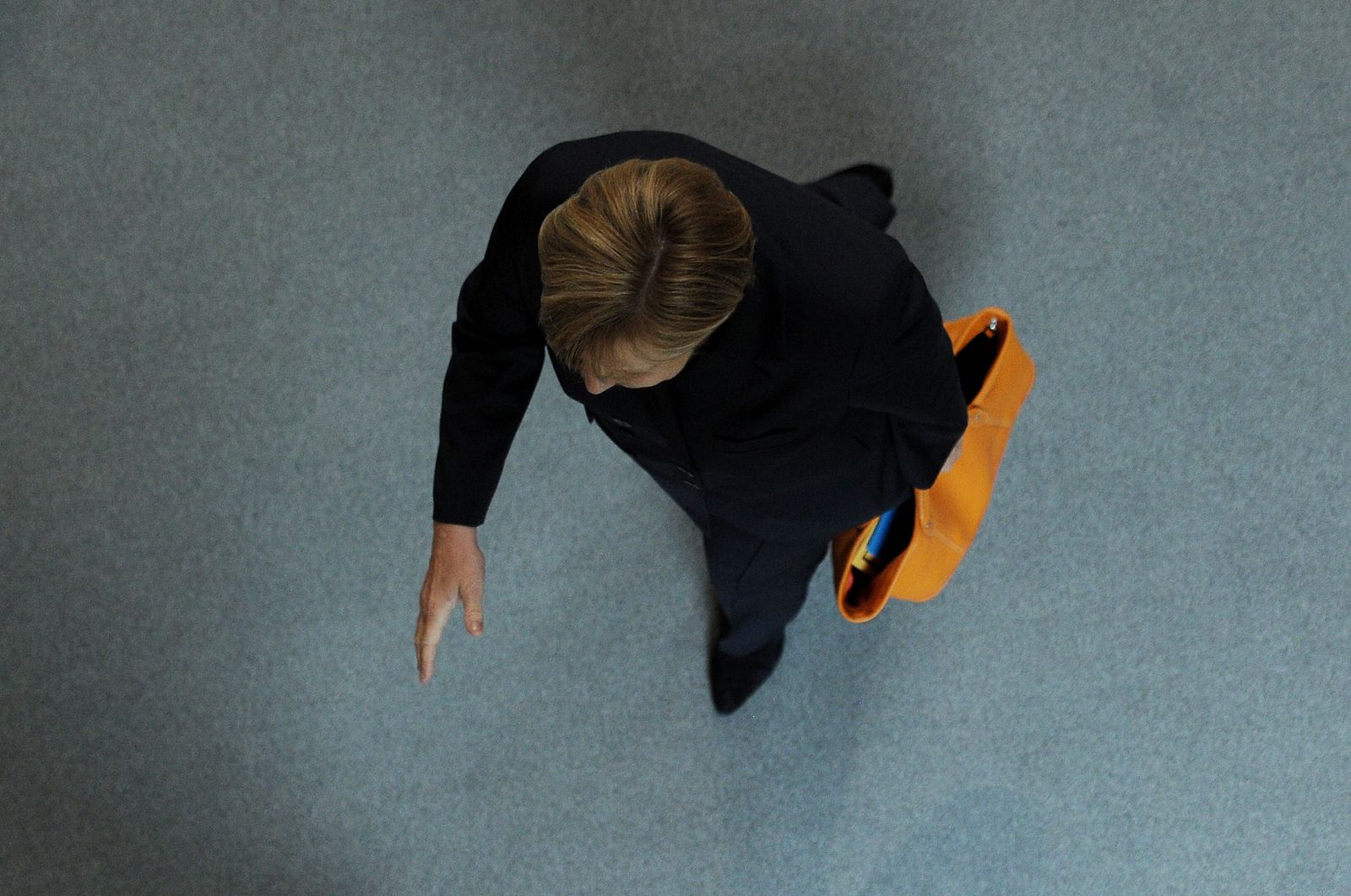