Germany's Greens, now the smallest party in the federal parliament after scoring 10.7 percent in the Sept. 27 election, are accustomed to punching above their weight. As junior partner to the center-left Social Democrats in the federal government from 1998 to 2005, they made what had been a conservative industrial society more environmentally friendly and tolerant. They were the driving force behind the phasing out of nuclear power stations and an array of social reforms that included more liberal laws on same-sex partnerships.

Now they are spearheading an experiment in a small regional state that could eventually transform the nation's political landscape. Even though they won just 5.9 percent of the vote in an Aug. 30 regional election in the tiny south-western state of Saarland, with a population just over 1 million, the Greens have emerged as kingmakers in a new three-way alliance with former arch-rivals. They have also managed to wrest a string of policy concessions and are likely to get two cabinet posts in Saarland -- even though they only have three seats in the state assembly, out of a total of 51.

It will be Germany's first three-way coalition consisting of conservative Christian Democrats, pro-business Free Democrats and Greens. It's known as a "Jamaica" coalition because the parties' official colors of black, yellow and green match the colors of the Caribbean island's national flag.

If the alliance proves workable, it would provide a fresh option for creating governing coalitions in Germany, both in other regional states and in the long term at the national level. For the most part, there have been only two political camps in Germany -- the CDU and FDP on the right and the Social Democrats and Greens on the left. But the formation of the Left Party in 2007 has shaken up the political scene and is forcing parties to consider new ways to form workable governments.

The possibility of a "Jamaica" coalition could spare Germany a repeat of the turgid federal election on Sept. 27, which Chancellor Angela Merkel was predestined to win because the realistic options for coalitions were so limited.

Until now, the Greens, which emerged from the environmental, anti-nuclear and pacifist movements of the 1970s, have been firmly in the left camp of German politics, But the party's experience in government, both at national and regional level, has made its leadership more pragmatic -- maybe too pragmatic for its rank-and-file, according to some observers.

Blow to the SPD

The Saarland Greens voted on Sunday to approve coalition talks with the CDU and FDP, which means CDU governor Peter Müller is set to remain in power even though his party lost 13 percentage points in the election.

The decision is a blow to the SPD, which had hoped to oust Müller by forming Germany's first three-way coalition between the SPD, Left Party and Greens as a tryout for a possible alliance with which to topple Merkel in the 2013 federal election.

But the Greens decided they couldn't form a stable government with the Left Party, whose leader Oskar Lafontaine, who hails from Saarland, had campaigned fiercely against them in the campaign. For many Greens, Lafontaine's announcement on Friday that he would step down as floor leader of the Left Party in the federal parliament was a sign that he planned to play a stronger role in Saarland politics again, possibly as puppet master in a left-wing government. That is what led many Greens at Sunday's party conference to vote for an alliance with the conservatives and FDP instead.

The national leadership of the Greens has been quick to rule out a "Jamaica" alliance at the national level, partly because Chancellor Angela Merkel's conservatives and the FDP plan to extend the phase-out period for nuclear power stations. But Saarland could herald "Jamaica" as a viable constellation in the long run.

Media commentators say the Greens in Saarland have taken a courageous step that could pave the way for new political alliances throughout Germany, but they add that it entails risks. Firstly, it might not work. Secondly, the Greens may scare off their many ideological supporters for whom backing a conservative-led government remains anathema.

"This will churn up Germany's party system because no other state has ever had such a coalition. The Greens' decision is brave but also risky. It is brave because regional Greens leader Hubert Ulrich has given them a new option for government alliances. And he appears to have wrought so many concessions from the conservatives and the liberals that the new government will have a strong green hue. And in doing so he has also clipped the wings of Left Party leader Oskar Lafontaine, who had envisaged becoming a sort of shadow governor of Saarland. If the experiment works, Jamaica could become a model for other states and in the long term for the federal government.

"But the decision is also risky because the three parties have until now bitterly opposed each other. There is strong animosity between the Greens and the FDP in particular. The vast majority of the Greens rank-and-file outside Saarland doesn't want Jamaica. So Ulrich's vote will probably lead to plenty of disputes in Saarland and among the Greens."

"It's good that Germany is trying out a Jamaica coalition rather than the alternative novelty of a coalition between SPD, Left Party and Greens. Working with the Greens will enable the conservatives to abandon ideological baggage. In a best-case scenario. cooperation will force the unequal partners to jettison pet policies that have grown outdated.

"It gives the CDU and Greens the opportunity to try out government options that go beyond the standard alternatives of CDU/FDP and SPD/Green. The CDU wins valuable room for maneuver if it doesn't have enough votes to form a government just with the FDP. And the Greens can free themselves from their enforced link with a weakening and increasingly unpredictable SPD.

"If the Saarland experiment works, Germany could be spared further election campaigns like last month's federal election, with a chancellor candidate who didn't even have to fight to stay in office, and just two realistic coalition options. But first, Jamaica has to work in little Saarland -- and that is by no means assured."

"The Greens want to be the party of the middle ground that stands above the traditional political camps of left and right. They want to dictate the terms in the various coalition negotiations. That is a lot of power for a very little party. This is the power with which the Greens want to attract new voters. They'll need to find new voters because the traditional voters who swing between SPD and Greens will say goodbye if they no longer know which government leader they'll get if they vote Green.

"It's possible that many people will think the Greens are gambling away their biggest asset: their credibility. The party strategists may long since have become steeped in cynicism, grown fed up with the SPD and alienated from their roots -- but many of their supporters haven't.

"If the Greens lose all these people, they'll slide just where they don't want to be -- straight into the lap of the conservatives and FDP, and probably into insignificance."

"Oskar Lafontaine planned to stage a triumphant return to Saarland. As secret governor calling the shots in a government made up of his Left Party, the SPD and Greens. But now the 'Napoleon of the Saar' will have to take his seat on the uncomfortable opposition benches. The impressive 21 percent that Lafontaine won for his Left Party in Saarland, more or less single-handedly, doesn't count for much any more. Lafontaine wanted to radically change the political landscape with a three-way 'red-red-green' coalition in Saarland -- but foundered on his own greed for power."

"Lafontaine's sudden indication that he would return to the Saarland state assembly has sent the alarmed Greens fleeing into the arms of the CDU and FDP. Those two parties have granted the Greens extensive concessions. And the Greens are to get two cabinet posts on top of that. One can't achieve much more than that with 6 percent of the vote and just three MPs." 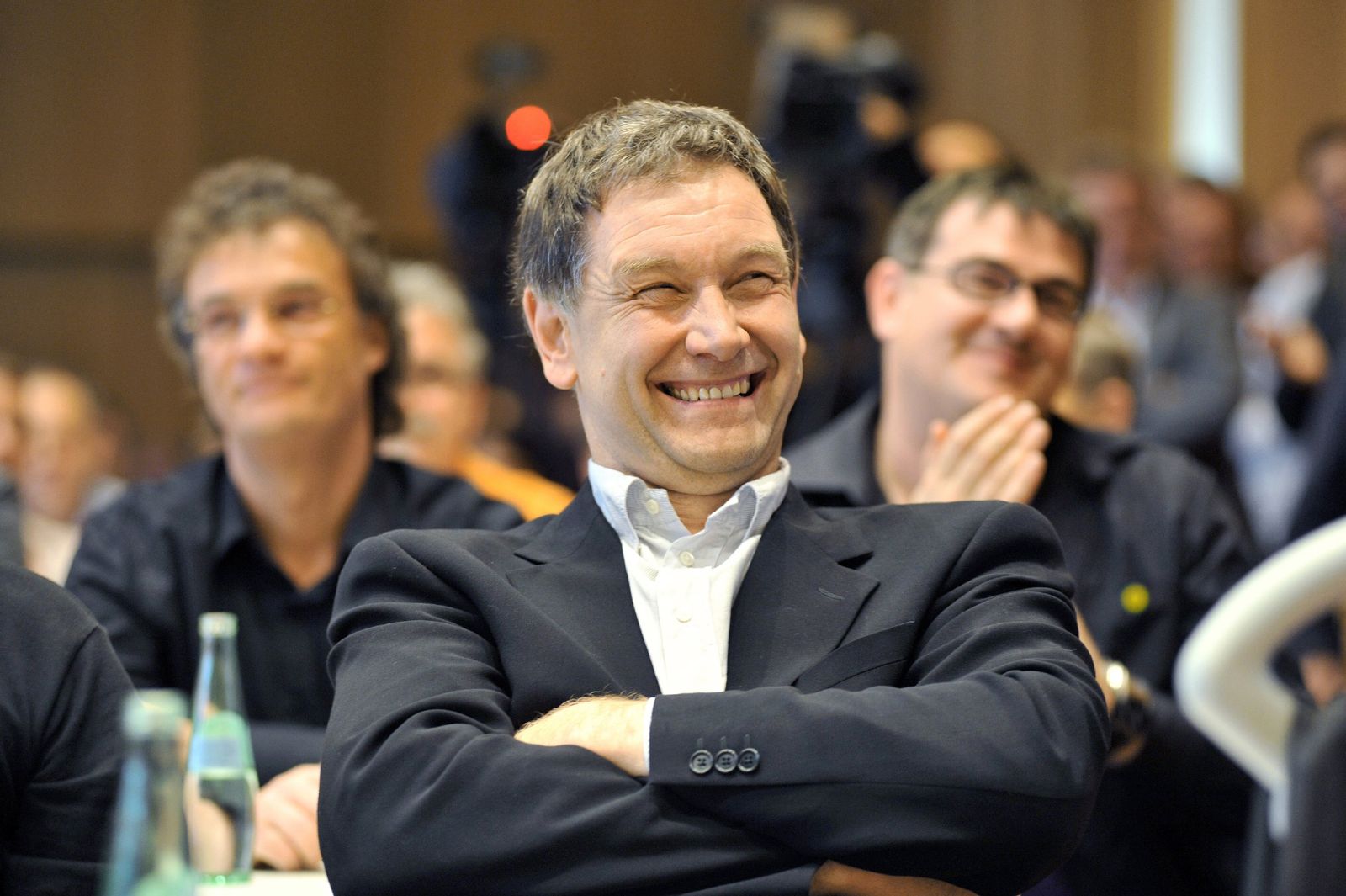 Pleased with himself -- Hubert Ulrich, the regional chairman of the Greens in Saarland, responding to Sunday's vote to join forces with former enemies.