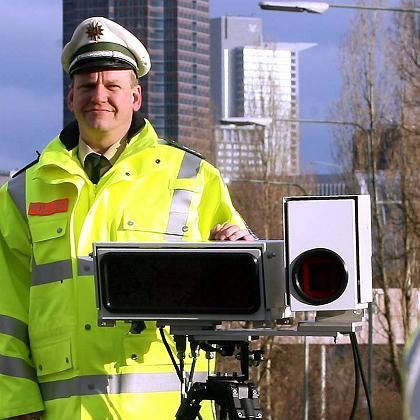 A German policeman operates a system used to record the license plate numbers of motorists.

Specifically, the Karlsruhe-based court said that laws allowing the techniques in the states of Hesse and Schleswig-Holstein violated federal privacy protection laws because they were equivalent to "complete surveillance" of broad swaths of the population and did not provide enough restrictions on the use of license plate scanning. Under current regulations in the states, for example, it was argued that police could profile individuals' movements. The court did say, however, that random sampling of license plates or mass scanning near borders would be acceptable.

This decision is the second large privacy decision handed down by the court in recent days. Less than two weeks ago, the court ruled that spying on personal computers and online activity violates the right to privacy and was therefore, in most cases, unconstitutional.

Nevertheless, the ruling came with exceptions. In exceptional cases, the court ruled, authorities may use virus-like software to spy on suspects after obtaining permission from a judge.

The current decision was qualified in a similar way. The court did not outlaw the scanning practice itself but only the specific laws under which it was being conducted. Hesse, Schleswig-Holstein and other the states are now expected to modify their surveillance regulations accordingly. It also said that states would not be in violation of the constitution if data were deleted -- without a trace -- immediately after it was compared to databases.

For appropriate limitations on such laws, the court cited legislation in the eastern German state of Brandenburg, where regulations stipulate that such mass scanning can only be conducted in order to solve serious crimes or if a person's life is in danger.

Three Germans from Hesse and Schleswig-Holstein had sued against the practice -- widely deployed in Great Britain -- before Germany's highest court. Under the system, license plates are scanned by a mobile or stationary video camera and matched up with investigator data lists -- often in just a fraction of a second, according to the Sueddeutsche Zeitung newspaper. The paper writes that in Hesse, the practice was largely used to track stolen cars or vehicles that did not have insurance.

The practices won't necessarily have to stop after the ruling, either. The court is merely calling on the states to define limits precisely enough that police can't just arbitrarily put cameras wherever they want.

German commentators on Wednesday praise the court's decision for reinforcing privacy protections in Germany. However, they share the anxiety that qualified laws still give the authorities a lot of "wiggle room" to invade privacy.

"Big Brother in Germany now is different than the one in Great Britain. Here, he is a private citizen. In this country, there are only a few hundred cameras operated by the police. Nevertheless, estimates put the number of cameras installed by private operators in public spaces or publicly accessible spaces at around 400,000. All across Germany -- in trains, gas stations, shopping centers and department stores -- places are under surveillance. Karlsruhe doesn't say anything about that. According to the most recent finding, interconnecting private and public surveillance systems  is impossible in Germany."

"The ancient Greeks had the tale of Argos, whose hundred eyes allowed nothing and no one to escape his notice. Because people in antiquity couldn't imagine surveillance more comprehensive than that, they gave Argos the epithet 'Panoptes,' the all-seeing. Hermes, messenger of the gods, then put Argos to sleep and hurled him off a cliff. The Federal Constitutional Court is now trying to prevent the resurrection of a high-tech version (of Argus)."

"The court has not criticized the practice but only the law it is based on, which appeared too unrestricted and uncertain to the judges. But the hurdles for a new revision are relatively low."

"In reality, the Federal Constitutional Court has asked for a more detailed law that promises citizens more transparency. They should be able to know in exactly which cases the state can take their license plate information from the side of the road. To do so, parliament will be forced to give an account of what it will most likely enact and what the implications of comparing license plate numbers with lists of suspects might be."

"The loud 'no' out of Karlsruhe should not only be understood as a warning to politicians. It should also serve as a wake-up call to people. The population lacks a certain sensibility for the loss of freedom that each new security law brings with it. Society still hasn't defined which curtailments it is ready to accept in return for more protection."

"As long as citizens are not going to serve as the early-warning system on this issue, the Federal Constitutional Court must play the role of a corrective judicial authority. It would be preferable if these senseless Big Brother projects, such as this license-plate-scanning one, were already blocked by the resistance of the population by making politicians fear the loss of votes. But we're still a long way from this point, as illustrated by the fact that there were hardly any protests against these license plate checks to be heard."

"The laws came under attack because they were put together in such a sloppy way that they didn't at all specify the reason for the checks or the cause for the investigations. The regulation from Hesse, in particular, was so imprecise that it allowed both the comprehensive electronic surveillance of drivers and the compilation of profiles of individuals' movements, which together amount to complete data collection on motorists."

"Imprecision in the regulation and disproportionality of the invasiveness -- these are not the only reasons (which are happening over and over again and more and more often) why the Federal Constitutional Court overruled the security laws. In particular, it has to do with the fact that these laws have all the hallmarks of a totalitarian state, which wants to know everything about everyone, suspect or not, without cause and without limitation."