Hundreds of thousands of protesters demonstrated in hundreds of cities around the world on Saturday against banks and the global financial system. In Germany, the main marches took place in Berlin and the country's financial center, Frankfurt. Demonstrators mounted protests in around 50 German cities, with total participation of more than 40,000 people according to Attac, one of the events' organizers.

Taking their cue from the "Occupy Wall Street" movement in the United States, they took to the streets with their "We are the 99 percent" message to draw attention to the negative effects of a financial and economic crisis that has driven millions of people into poverty and was triggered by severe excesses by the world's banks and financial system. 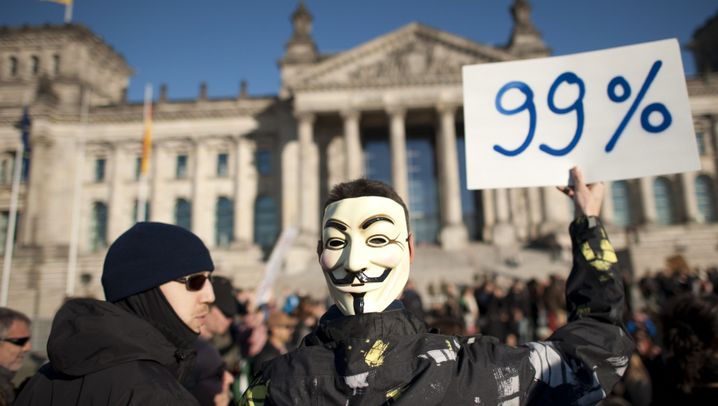 In a rare development, the protests drew widespread support from politicians in Germany and Europe, who are currently wrestling with banks to increase the participation of private creditors in the debt bailout currently being planned for Greece. The same politicians are frustrated by their inability in recent years to push through tougher regulations for financial institutions.

Although Germany has been largely untouched by the crisis -- at least compared to countries like Spain, Greece, Ireland or the United States -- concerns are still growing here that the situation could soon deteriorate in a country that has been admired for so far steering clear of the worst of the global downturn.

The German protests didn't see any of the violence encountered in Rome over the weekend, where Black Block, autonomist demonstrators delivered some of the worst altercations with security officials seen there in years. Some are nevertheless asking if Germany and Europe are on the verge of experiencing widespread social unrest.

In other countries, editorialists have often been critical of the "Occupy Wall Street" movement, but op-ed pages in Germany on Monday reserve their censure for the banks for bringing on the crisis and also the political failures that allowed the situation to spiral out of control in recent years.

"Ultimately, the protests are an expression of bitter disappointment. During the 2008 financial crisis, when states pumped enormous sums of money into banks, many people believed they were witnessing a reformation of capitalism. That was and remains an illusion. The major banks continued to gamble with the same means and methods that led to the financial crisis. They were able to continue with their game because none of the strict new rules announced by global leaders were ever put into force. Financial capitalism hasn't become more humane, and turbo capitalism is still going strong."

"The (international) protests are no longer focused on national politics because people ... have experienced how powerless and disoriented national parliaments have become in the financial crisis. The international protests demand international policies. The Davids of the world are no longer willing to stand by and watch as banks are cleaned up with millions and billions of taxpayer money and the potholes on the autobahns of international financial capitalism are merely filled so that the system can simply speed ahead. The Davids are calling for new rules for the road, speed limits, new conditions for registration and inspections for vehicles that want to travel on this road."

"A major uneasiness is prevailing in Germany at the moment, a diffuse feeling of concern: about the currency, people's savings and their own standard of living. But in contrast to the US, Spain or Italy, where young people have experienced the effects of the crisis, it has remained largely virtual here. In Germany, there is no massive unemployment; in fact, more people have jobs today than at any other time since German reunification. Prices are relatively stable, the standard of living is high and the social system is still rather lavish.... The crisis is barely tangible in everyday life."

"Those are actually good preconditions for keeping a cool head and not throwing the baby out with the bathwater in an anti-capitalistic furore as is happening up and down the country right now. The fact that our financial system has become dysfunctional because it could have used more regulation in some areas is obvious. The banks need to be trained to only take on risks they are actually capable of carrying -- and to accept responsibility for them. European politicians also need to get rid of the sense of shock they have towards the reactions of markets. The people should watch closely as that happens -- without becoming vengeful. It would be a shame if the colorful and creative global 'Occupy' movement allowed itself to be taken over by the professional protestors who are merely nostalgic for (the old days of) Socialism."

Just as in 2009, "most of the protesters are not opponents of capitalism. Increasingly, they come from the center of society and are motivated by a vague discomfort with the way the European Union is being run. They believe something dangerous is about to happen. Nor do they trust the G-20, the International Monetary Fund or the World Bank. Many just want to understand what the crisis is, and they are no longer willing to accept the empty words of the elite. They want to better understand the connections and the programs being used to counter the crisis."

"In countries like Spain, Greece and the US, where the financial crisis has long been palpable, the protests have a concrete reason. Germany -- which, as a refuge of stability for investors from all over the world, has profited from the crisis so far -- has experienced none of this. Consciousness is also lacking of the fact that German banks and politicians also had a major role in the global crisis. The causes and perpetrators need to finally be named -- and both the Free Democratic Party (eds. note: the junior partner in Chancellor Angela Merkel's coalition government) and Deutsche Bank's Joseph Ackermann would make great starting points."

"There is a common tenor of the 'outraged', who began their protests in Madrid and arrived in America as the 'Occupy Wall Street' movement. It is directed against the financial markets, and the initiators and supporters of the protests are, in many places, young people who are afraid that the debt crisis is robbing them of their future."

"Politicians, who are currently preparing for the G-20 summit in Cannes, France ignore the global protests at their peril. The movement will create additional pressure for a more comprehensive regulation of banks and disciplining of the financial markets. But although the banks shouldn't have any illusions about how unpopular they are, the politicians' own share of responsibility should not be omitted. The explosion in debt happened because they made promises to voters that couldn't be financed." 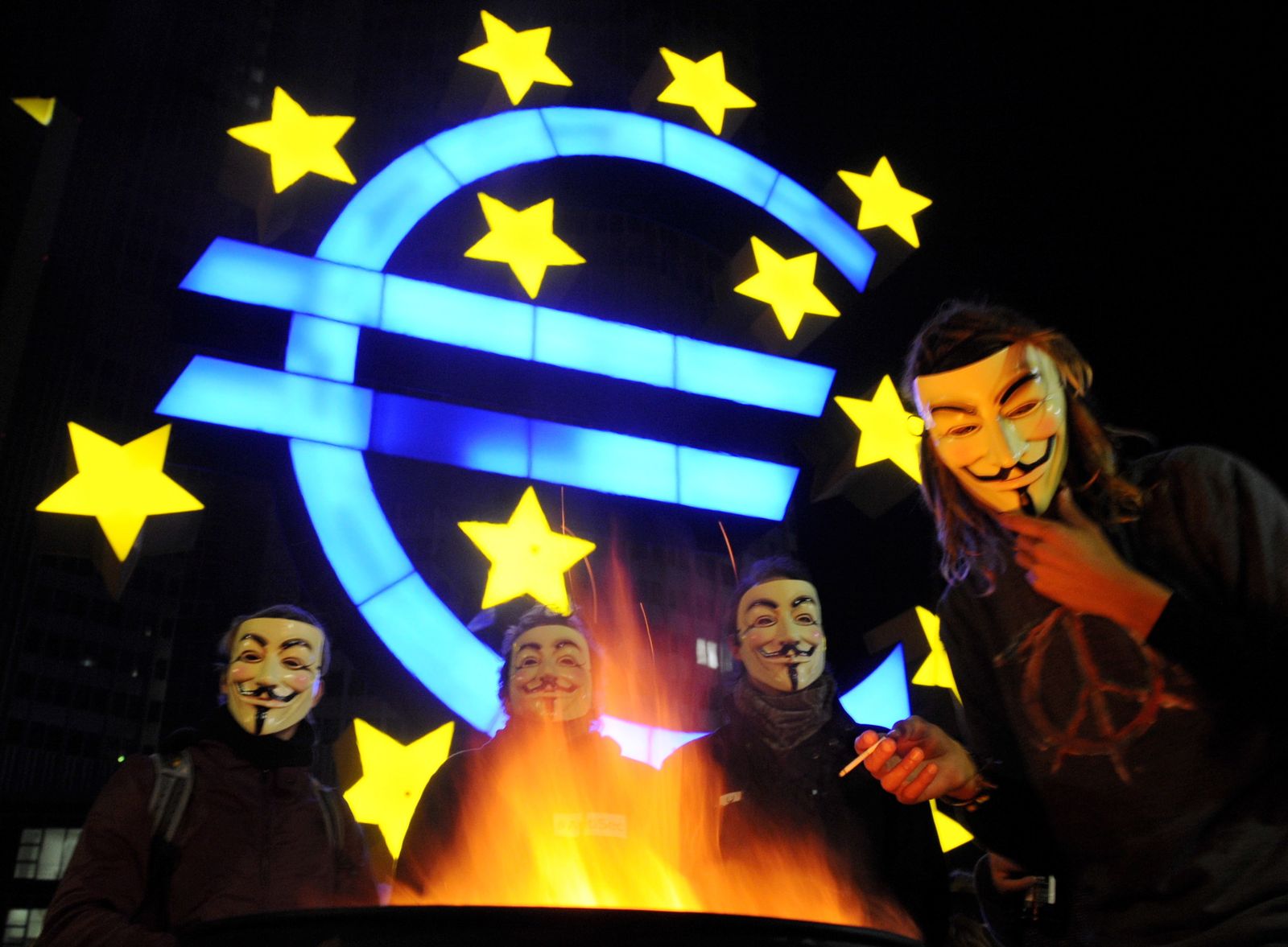 Protesters at the European Central Bank in Frankfurt on Saturday: "Turbo capitalism is still going strong." 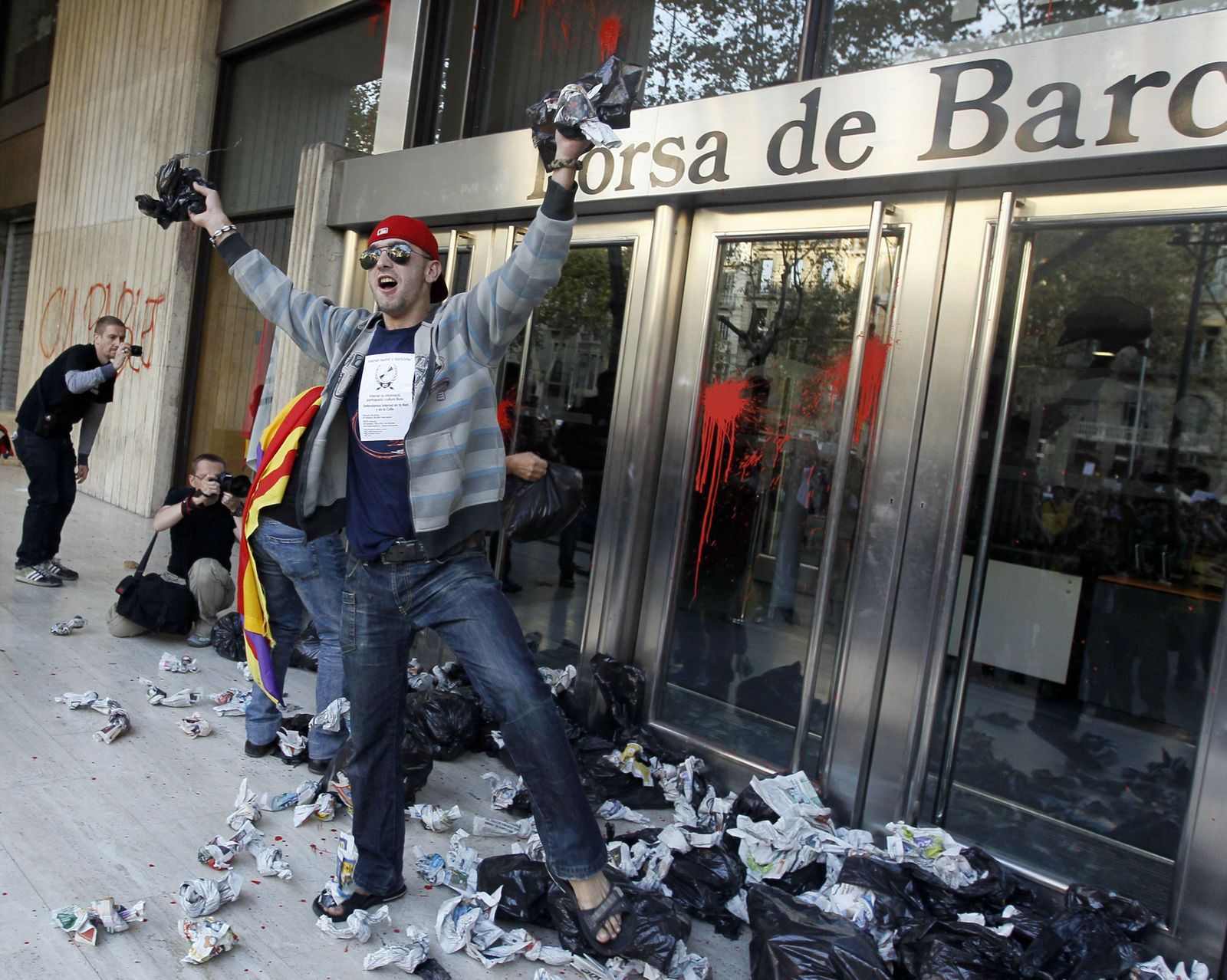