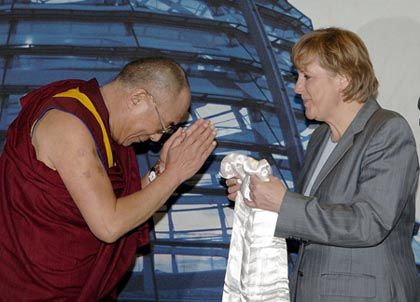 The Dalai Lama hands Angela Merkel a "peace scarf" in 2005.

German Chancellor Angela Merkel's announcement Saturday that she would welcome another chance to meet with the Dalai Lama promises to rock the boat in the world of German-Chinese diplomacy. The announcement comes during a period of heightened sensitivity, amid Western protests over China's crackdown on demonstrators in Tibet and Beijing's concerns that everything go smoothly at the upcoming Olympic Games.

Merkel's meeting with the Dalai Lama at the Chancellery in Berlin in September 2007 led to an outraged response from the Chinese government. Beijing cancelled planned diplomatic meetings, and relations remained strained for several months as behind-the-scenes diplomatic efforts were directed at resolving the crisis.

Althought the German chancellor will be in Latin America during the time of the Dalai Lama's next visit to Germany in mid-May, Merkel told the newspaper Frankfurter Allgemeine Sonntagszeitung she would "certainly meet again with the Dalai Lama at a later point in the future."

Merkel has openly defended her actions in September and her recent comments. "First of all, my reception of the Dalai Lama and my dealings with China are two different things," she said Saturday to reporters in Oslo, where she attended the opening of the new national Opera House. "But both are related to how we deal with whether or not human rights are being observed or disregarded, and Germany's position here is clear, and receiving the Dalai Lama also belongs to that."

Merkel's actions in September upset German business leaders, who felt that openly confronting China would lessen their chances of securing lucrative business deals. It also caused a row with the German Foreign Ministry, headed by Frank-Walter Steinmeier, who favors a cautious approach at odds with Merkel's directness.

Merkel numbers among the world leaders, including British Prime Minister Gordon Brown, who say they will not attend the opening ceremonies of the Beijing Olympics. The chancellor claims, however, that attending the event was never on her schedule in the first place.

On Sunday, Stephen Hadley, a top aide to US President George W. Bush -- who has repeated his eagerness to attend the ceremony -- said that skipping the ceremony would be a "cop-out" for countries protesting China's actions in Tibet and stressed that the US administration's "quiet diplomacy" was more effective than "frontal confrontation."

Writing in Germany's main newspapers Monday, German commentators generally applauded the motivation behind Merkel's actions but questioned whether her stance will achieve the desired effect.

"Another meeting between (the Dalai Lama) and (Chanceller Angela Merkel) should not have to wait until the next life. By meeting with him again, Merkel has once again made it clear to the Chinese that their protests against the (Dalai Lama's) visit to the Chancellery were not going to be the final word on the issue. Human rights will remain on the Chancellery's agenda, even when major powers like China are involved -- and even if it means far-reaching trouble. At the same time, it also gives the foreign minister the chance to learn that grinding his teeth had no effect."

"The chancellor is doing it again. Angela Merkel says that her doors are always open for dialogue with the Dalai Lama.  Around the Foreign Ministry, there will be complaints about (Merkel's) 'show-off politics.' And her team will answer back and speak about 'value diplomacy.' Behind it all are two different paradigms for how to conduct foreign policy, which unfortunately have never been seriously discussed. Countries like China and Russia have continued (at least until now) to refute the current theory of modernization that holds that a free market economy and political liberalization go hand in hand. But what does that mean for Western foreign policy? Answering that would merit a great public debate. But instead, the sides prefer to just brandish symbols at each other. Find China's Tibet policies unacceptable? Well, then, why not just let the Dalai Lama put a scarf around your neck to show your disapproval? That is still quite a long way from becoming a policy."

"Chinese politicians aren't always as hardheaded as they currently are being about the Tibet issue. If they need to be, China's communists can also be as flexible as bamboo"

"However, by retreating into rhetoric that has long grown stale and demonizing the Dalai Lama, Beijing has only succeeded in unnecessarily raising the hurdles to compromise. At some point, China's politicians need to realize that they have to change track on this issue. Delaying this realization just makes the eventual loss of face even bigger. A change in its policy toward Tibet or negotiations with the Dalai Lama before the games would appear to be out of the question. The strong international attention currently focused on China and the protests in the West -- which the Chinese find unjustified -- just make them more hardheaded and have only succeeding in causing the leadership and the Han Chinese to close ranks in a shared defensive stance."

"But it's not just Beijing that needs to find a policy that softens the hardheadedness and encourages more bamboo-like flexibility. The West has many knee-jerk and uncreative ways of reacting, too. And some Western countries seem less interested in bringing about a constructive solution with China than in scoring points against the country."

"Can the 2008 Games still be saved? The answer is: No. That is why it is even more important to save relations with China, which have already become dangerously cool."

"Two irreconcilable ways of thinking are clashing against each other. The democratic West cannot merely ignore its certainty -- developed over centuries -- that human rights should be a universal. Wherever human rights are abused, the West is obliged to oppose the abuse. The leadership of the Communist Party in Beijing, on the other hand, cannot tolerate any shock to the legitimacy of its autocratic power, and particularly not from outside. The party knows what is true and correct, because it fancies itself the expression of the will of the people."