In a country that is home to nearly 3 million people of Turkish descent, any time the leader of Turkey visits Germany, the details of his trip are followed very closely. Three years ago, Turkish Prime Minister Recep Tayyip Erdogan angered German politicians when he stated during a speech in a concert arena in Cologne that assimilation is a "crime against humanity." The message to Turks living in Germany was that they are Turkish first and German second, even if they were born here.

And in a country that has only begun to address the issue of the integration of its large immigrant population in recent years, it is the kind of heated message that isn't welcomed by politicians. A repeat of it in a year that has seen the publication of a best-selling, by politican Thilo Sarrazin -- which for a brief period poisoned the debate on integration in Germany -- could reopen the sensitive subject. The atmosphere surrounding Erdogan's Sunday visit could have grown tense quickly, but on Sunday and Monday reactions remained relatively muted.

During a speech before around 10,000 people of Turkish descent in Düsseldorf, Erdogan once again raised the subject of assimilation. "Yes, integrate yourselves into German society but don't assimilate yourselves. No one has the right to deprive us of our culture an our identity," Erdogan said. His visit has been perceived as a stop in his campaign for re-election in a vote scheduled for the summer.

Most German politicians seemed to have very few misgivings about the content of the Turkish leader's speech. But one line did manage to spark a political debate on Monday and Tuesday. "Our children must learn German," Erdogan said, "but they must first learn good Turkish."

Speaking at the opening of the CeBit technology trade fair in Hanover, which Erdogan also attended, German Chancellor Angela Merkel joined the debate by saying that the German language remains essential for the successful integration of the Turkish community in Germany. "We want our fellow Turkish citizens to truly have success," she said.

But other politicians in Merkel's goverment were more critical. "Children who grow up in Germany must learn German as the very first thing," said Foreign Minister and Vice-Chancellor Guido Westerwelle of the business-friendly Free Democratic Party (FDP). Germany's federal commissioner for integration, Maria Böhmer, of Merkel's conservative Christian Democratic Union party, agreed. "The language of the country in which one remains over time must be given precedence," she told the Passauer Neue Presse newspaper.

At least one prominent member of Merkel's party, however, backed Erdogan. Ruprecht Polenz, the chairman of the federal parliament's foreign affairs committee, said he could "recognize nothing worthy of criticism" in Erdogan's speech. Erdogan, he pointed out, had called on his compatriots living in Germany to focus more on education and careers. Besides, Polenz added, "many linguistics experts claim that a person must first get a grasp on their mother tongue before adopting that of the country in which they live."

"Those who are bothered by the fact that Turkish politicians also conduct their election campaigns in Germany, should consider the fact that 1.6 million people living in Germany possess Turkish citizenship. And those who want these people to identify more strongly with Germany need to do more than just instruct them about how important the German language is. ... They need to be offered something tangible. But what has the German government offered them in the past three years? Has it made it easier for Turks to become German citizens? Has it introduced dual citizenship or the right for Turks to vote in local elections? No."

"Erdogan, on the other hand, has promised all Turks who want to become German citizens a 'blue card,' that will ensure them special privileges in Turkey. This sort of 'dual citizenship light' could make it a lot easier for many Turks to decide to become naturalized German citizens."

"Erdogan is a demagogue, a nationalist. And he hammered his message, which is as simple as it is fatal, into the heads of 10,000 people: You are and will remain Turkish -- never forget that. By saying that, though, he is torpedoing efforts to integrate close to 3 million people with Turkish roots in Germany that cost German taxpayers millions of euros each year. Efforts to ensure that their children learn German right from the beginning so that they later have opportunities to get a job or a traineeship. But Erdogan doesn't care about that. He's in the middle of an election back home and any means to campaign is fine by him. That is shabby and irresponsible!"

"In order to knit together the Turkish community, Erdogan painted a picture of the spectre of a steadily growing xenophobia. And he knows exactly what kind of effect such rhetoric has. The higher the wall of Turkophobia in Germany is perceived to be, the less prepared the Turks will be to integrate -- a step many don't want to take anyway. It's a simple recipe for Erdogan: If they don't want us, then we also don't want to be a part of this society. Mr. Erdogan from Ankara has merely given his compatriots excuses. But his methods are premodern and have something feudalistic to them. He views Turks living in Germany as a large yet weak group incapable of helping itself -- one that needs the oversized Turkish state to ensure that its views are heard. Erdogan doesn't speak to his compatriots as citizens, but as pupils."

"How nice: Suddenly everyone is stepping in to take care of Turkish children who grow up in Germany."

"On the one side, you have (Erdogan) one who wants to make sure they can first speak good Turkish. On the other, you have (Chancellor Angela Merkel's) conservatives, who want them to speak error-free German first. Why shouldn't they learn to speak both, their mother tongue and German, just as the French and Italians living in Germany are allowed to do? And as many educators advise? Because Turks are different: They are the subject of distrust (in Germany)."

"Erdogan's appearance creates the impression that Turks living Germany are in danger of becoming a persecuted minority. He again spoke of the threat of forced assimilation and Islamophobia that can be compared to anti-Semitism. Does Erdogan even know what he is talking about? As little as the rally had to do with the realities of German integration policies, it did show a man who divides the world into a good and bad that his is unable to even differentiate between at home. The methods and ways that Erdogan's party deals with Christians in Turkey approximate what he is trying to accuse Germany of doing."

"Erdogan showed what he feels about (integration) with his advice to Turkish immigrants that their children first learn 'good Turkish' in order to avoid assimilation. Erdogan doesn't seem at all bothered by the fact that this would create disadvantages for his compatriots, because only those who do not rule out assimilation can integrate. At the end of the day, he wants to remain the father -- and his children should remain children."

"The sometimes shrill reactions (to Erdogan's speech) overshadow the fact that the message coming out of this visit could not be any further removed from his arrogant appearance in Cologne three years ago. ... Already during his visit to Berlin last October, Erdogan not only distanced himself from some of the statements he made in Cologne, but also offered the German government his help on the issue of integration. Integration, he said, is the precondition for 'peaceful coexistence.'"

"Berlin is dealing with a government in Ankara that is modernizing itself with a view to desired future EU membership, one that respects the rules of democracy and has also shown impressive economic growth. In the coming years, Turkey will continue to increase its position as a regional power, and its development could serve as a model for the compatibility of Islam and democracy. That applies even more so following revolutions in North Africa that have seen several Islamic countries seek their own path into the future." 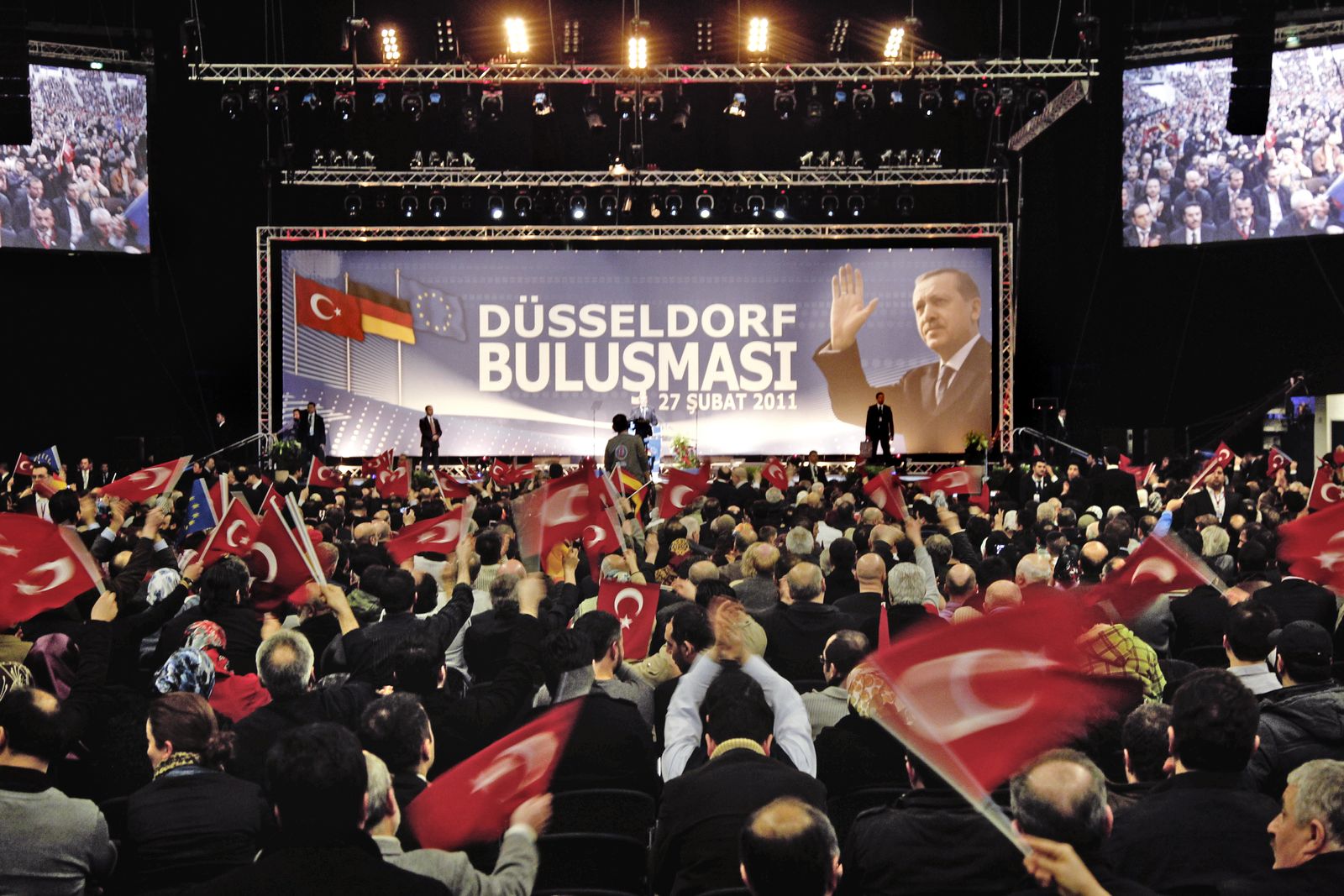 Turkish Prime Minister Recep Tayyip Erdogan in Düsseldorf on Sunday: "Our children must learn German, but first they must learn good Turkish."