The revelation that the policeman who shot Berlin student Benno Ohnesorg in 1967 was a spy for the Stasi East German intelligence service has led to an intense historical debate in Germany. Ohnesorg's death radicalized many students and is seen as one of the factors that lead to the 1968 student protest movement and the emergence of the far-left Baader-Meinhof terrorist group. 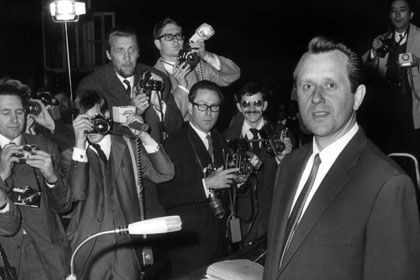 Now Germany is asking itself what would have happened if people had known that Karl-Heinz Kurras, the policeman who fired the fatal shot and became the epitome of what students saw as an authoritarian West German establishment, was a communist and a Stasi informant? Would 1968 have happened? Would the country have been terrorized by left-wing urban guerrillas for over a decade?

The issue has also raised questions about whether the gigantic archive of Stasi files is being combed thoroughly enough to reveal the Stasi's involvement in West German institutions during the Cold War. How many other significant secrets lie buried in the over 100 kilometres of files and film and in the rubbish bags of shredded documents?

Kurras's involvement with the Stasi came to light by accident when researchers were working on a project about people killed trying to cross the Berlin Wall. The chance discovery has sparked criticism of Marianne Birthler, the commissioner in charge of managing the Stasi archive.

Historians have said Birthler's commission isn't working professionally and systematically enough to bring the Stasi's influence in West Germany to light. However, media commentators defended Birthler on Wednesday, saying the commission hadn't been given the mandate or the staff needed to comb the archive comprehensively for Stasi operations in the West. Maybe, argue some commentators, that's because many in the west would prefer not to rake up an uncomfortable past.

"Even 20 years after the fall of the Wall, the Birthler Commission is still the junk room of the German Democratic Republic's (GDR) history. Most of the files have been catalogued but few people know what's in them. One shouldn't blame Marianne Birthler or her predecessor Joachim Gauck. The volume of documents is gigantic and around a fifth of the 160 kilometers of Stasi files haven't been read. There are kilometers of film material. There are 15,500 rubbish bags full of shredded documents of which 400 are to be pieced back together in the coming years. It's impossible to do more."

"It would be far more effective to give the Birthler Authority a clear research mandate, and to furnish it with the necessary financial resources and staff -- and to give it political backing. The accidental revelation about Kurras doesn't expose any incompetence by the authority itself but it does reveal a certain degree of West German self-deception: The issue has been insufficently researched because many in the West don't really want to know and would prefer the unpleasant past to be left uncovered."

"The German parliament still hasn't instructed the Stasi archive commission to look thoroughly at what influence the GDR's state security service had on members of parliament. One shouldn't exaggerate the Stasi's role. And the documents shouldn't be regarded as containing the gospel truth. But it must be brought out into the open. ... People who don't want to know about the influence of the Stasi can only make superficial judgments about the history of the GDR and West Germany."

"Hardly anyone in the West wanted or wants to know anything about the work of the Stasi in the old West Germany or in West Berlin. Or have we overlooked any attempts by Western parliaments to have their MPs checked out? Have regional governors, parliament presidents, constitutional courts tried in vain to get information from the Birthler Commission? Did the West Berlin police make an attempt to check itself out? Of course not. The West in general didn't want to know about the Stasi because it wasn't interested in the East. Politicians didn't want to know anything because they may have found out things that cast a new light on their own history. ... No one wants to have to rewrite history, no one wants to abandon their own legends."

"The Kurras case could spark a new wave of interest in the activities of the Stasi. In this year when the 60th anniversary of the German Federal Republic and the 20th anniversary of the fall of the Berlin Wall are being commemorated, it would do us good not just to celebrate ourselves, but also to demand something of ourselves."