The junior partner in Germany's center-right coalition, the pro-business Free Democratic Party (FDP), have had something of an annus horriblis, dropping almost 10 percent in opinion polls since the federal election in September 2009. And much of the blame for its slide in popularity has been levelled at the party chairman, Foreign Minister Guido Westerwelle.

The embattled leader was provided with an opportunity to turn the tide with his speech to the party at its annual Epiphany conference, also known as the "Three Kings" meeting. And for now at least he seems to have persuaded his critics within the party to put away their knife sharpeners.

Westerwelle outlined the successes of the coalition government since taking office and attacked the opposition, warning against a left-wing coalition government in Germany. However, the leadership crisis may just be postponed. Recent polls suggest the party might not clear the 5-percent hurdle required to enter parliament if elections to the Bundestag were held now, a dramatic decline from the 14.6 percent it scored in the 2009 election.

And the party faces an important electoral test sooner than it would probably wish. On March 27, the southern state of Baden-Württemberg goes to the polls and current surveys indicate that the FDP might not even garner enough votes to make into the state parliament. That election is only the first of seven this year across Germany.

Analyzing his performance on Thursday, some German editorialists defend Westerwelle's speech, with many predicting that the pugnacious foreign minister's days are numbered at the FDP party helm.

"Westerwelle's speech was fierce and committed. Those, however, are the only positive things that can be said about the FDP leader's appearance. Otherwise, it was simply absurd."

"Certainly he could never have met the high expectations that were stoked by his critics for this supposedly fateful speech. However, what Westerwelle -- and his liberals -- delivered on Thursday bordered on a denial of reality. No one addressed the loss of trust among voters or opinion poll figures that show that the party's very existence is under threat. Many of the speeches were made up of the same phrases that have been used by the FDP leadership for years: Strengthen the middle classes, reduce taxes, effort must be rewarded. Then there was the praise for the work of the coalition government and the attacks on the opposition."

"As the last speaker, Westerwelle could have dared to also admit mistakes. Instead he indicated that everything was going well and that he would continue as before. But that is hardly going to bring about a turnaround, never mind assure wins in the approaching state elections."

"The FDP chairman will end up like a Bundesliga football manager: When there is no success for a long time, the big victories of the past no longer help. Doubts arise about training methods and tactics and, in the end, the manager can no longer motivate the team and is booed by the crowds. In politics, the likely successor is already in the club. After the speech by General Secretary Christian Lindner, which was almost demonstratively cautious but obviously designed to display his intellectual acuteness, some of the audience had to hold back their neighbors from giving him a standing ovation."

"All the ridiculous fantasies about whether the leader would now be overthrown or at least cut down to size have proven themselves to be exactly what they always were: without foundation. The FDP, which is hovering around the 5 percent mark, cannot afford such a joke so soon before important state elections. All the more so as the party has no alternative in sight to replace Westerwelle, who aside from some defeats and a few embarrassments, can be thanked for successes that he fought hard and consistently for."

"Stuttgart showed that the FDP still understands how to convince itself of its own merits. That is completely necessary in a country in which freedom does not have a front-row seat. True liberals (meant here in the European context of laissez-faire, business-friendly) can be lonely in Germany, and that can be detrimental to the purely liberal impulse to look at the world with happiness and optimism. The audience should not be begrudged a little bit of joy at the lovely and truly liberal words."

"In a combative speech, Guido Westerwelle showed his FDP that he will be around for a while to come. As party leader and foreign minister. No mention of resigning or stepping down. Instead a clear acknowledgement of his policies, his party and the direction he is taking."

"The message was clear: This party leader does not run away when things get tough. And he is prepared to fight. General Guido!"

"Even his critics have to realize that changing horses in the middle of a big election year makes no sense. Quite the opposite. They would first have to have a stronger orator, better fighter and more convincing election campaigner than Westerwelle."

"Everyone knows that things are going miserably for the liberals. Westerwelle has turned the FDP into a single-issue party focused exclusively on tax cuts."

"Now that even his own supporters realize that tax cuts are nonsense in light of the public debt, the party has nothing left as an issue. And no one in the FDP has the slightest idea how to get out of this mess."

"The FDP has done everything wrong. It stuck to its mantra of tax cuts for too long instead of accepting reality. Westerwelle's central and irreparable mistake, however, is something else. He did not understand that the role of foreign minister requires tact and reserve. With unrestrained self regard he weighed into the issue of welfare reform, acting as the old bruiser. And he thus achieved what no other politician since 1949 had: making oneself unpopular while foreign minister."

"Westerwelle's days are numbered as party leader. If the FDP does not make it into the state parliament in Baden-Württemberg at the end of March, then the tired rebels will have to overthrow him. But that would be a sad and futile putsch. There is no viable successor in sight, or even anyone who could incorporate a meaningful idea for the liberals. One could almost feel sorry for them."

"The speech was worse than usual, it was way below expectations. It was too loud, too long, too self-righteous, too pompous, embellished things too much, was too much in denial of reality and too old-fashioned. It was far removed from the party's problems. There was too much style and not enough substance, much ado about nothing. This wasn't a straight-talking leader but a loudspeaker for himself. The speech that many Free Democrats would have liked to hear from their leader was made by General Secretary Christian Lindner."

"Westerwelle no longer has the power to intoxicate the FDP at the party conference. He definitely doesn't have the power to give society an idea of what liberalism is and why it might need liberalism."

"The FDP and political liberalism need a new leader. Anyone who was not certain of this before the party conference is now."

"Westerwelle, the brilliant orator and election campaigner of the opposition years is paralyzed in his government role. He rarely accepts advice and believes that his fragile hold on power can be maintained with a speech that only sounds combative but at its core is made up of the classic set-pieces of his conference rhetoric. Westerwelle plays the fighter with verve, but he isn't actually fighting. He doesn't react to the criticism, he doesn't come up with any new ideas, and he doesn't risk a change of strategy. Instead he retrieves the old well-known issues: the middle classes, being prepared to make an effort, tolerance, more freedom, less state."

"He leaves the urgent core questions of the day unanswered: How will the FDP get out of this narrow thematic focus and find other political areas apart from tax cuts? How will the liberals escape the Babylonian clutches of the Christian Democrats? How can the party of freedom react to the defection of the liberal urban voters to the Greens? Why in a liberal society do the liberals have so little support?"

"The leader has to find the answers to these questions. ... On Thursday, Westerwelle had the opportunity to show everyone that he understood how serious the situation is. He failed to use that opportunity and now his days are numbered." 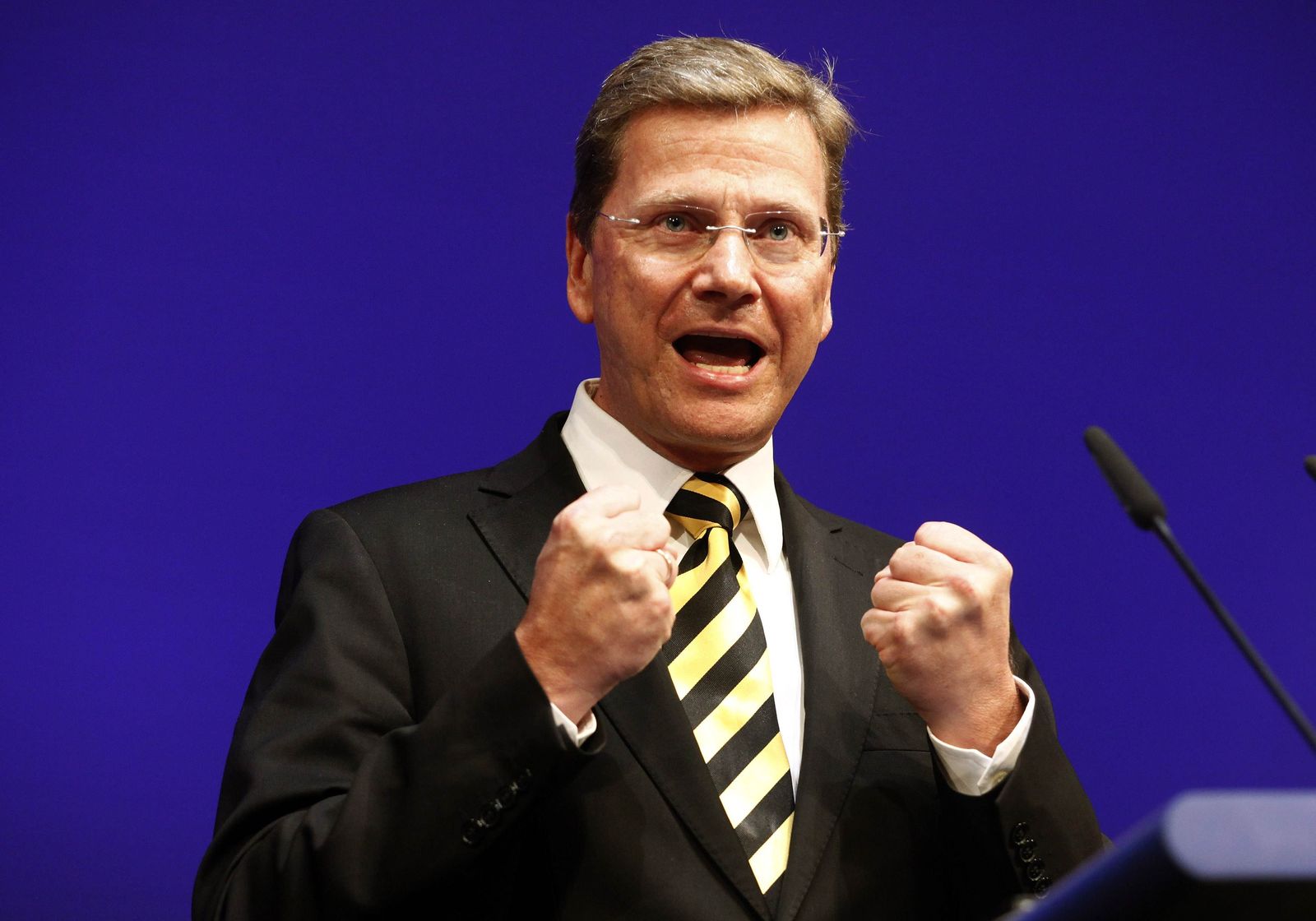