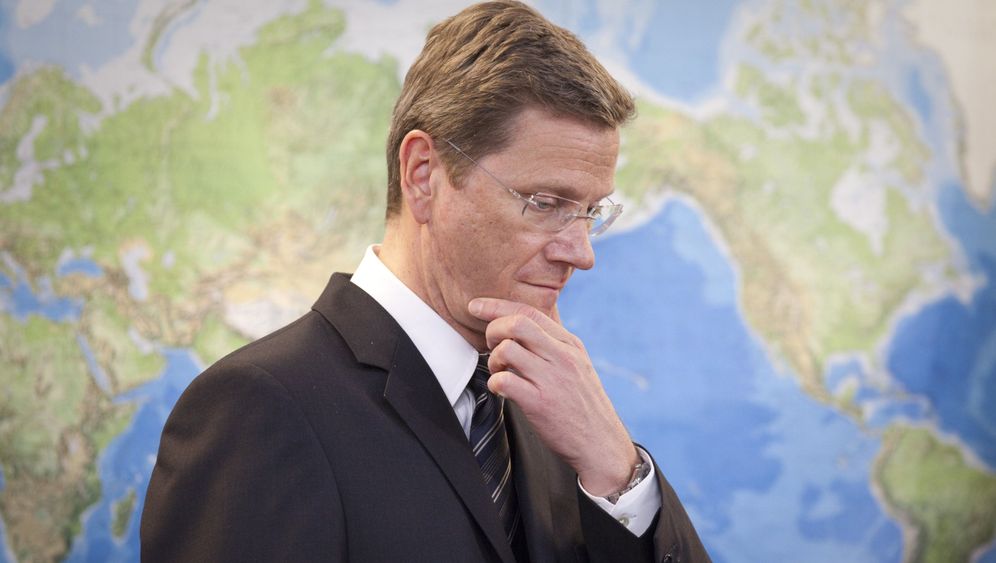 Photo Gallery: The Rise and Fall of Guido Westerwelle

Guido Westerwelle said on Sunday he was stepping down as leader of the pro-business Free Democratic Party in the wake of stinging regional election defeats for the FDP, the junior partner to Chancellor Angela Merkel's Christian Democrats.

Westerwelle had been chairman of the FDP for 10 years and led the party to its biggest success in the September 2009 general election, when it scored 14.6 percent and entered government for the first time since 1998.

But the FDP's popularity has slumped since then because of increasing criticism of its record in government. The FDP has failed to deliver on its tax-cut promises and has increasingly been seen as just representing its core clientele -- high-income professionals.

German media commentators say Westerwelle's departure won't solve the party's problems and that it urgently needs to rethink what it stands for if it is to have any chance of success in the 2013 general election.

Some editorialists bemoan the decline of a party that has played an important role in German politics since World War II, serving as kingmaker in both center-left and center-right governments and thereby ensuring a political continuity that has benefited the country.

The FDP has stood for civil rights and individual freedom, and for the market economy, and had a major hand in shaping German foreign policy under the stewardship of Hans-Dietrich Genscher, foreign minister from 1974 until 1992.

Comentators say that under Westerwelle, the FDP has degenerated into a single-issue party preoccupied with getting tax cuts for its well-off voters, and that it has jettisoned much of its intellectual clout in the process.

Some also say Westerwelle should quit as German foreign minister too, because his authority as minister has been dented by his resignation as party leader. On Monday, Westerwelle announced he was stepping down from his position as Merkel's vice chancellor.

"Guido Westerwelle picked the last possible moment to quit of his own volition. If he had delayed his resignation by just one more night, he would have been chased off the stage as a stubborn politician bent on clinging to power, and the party would have dissected itself in the struggle over his succession. But he has cleared the way just in time to be able to stay on as foreign minister. The resignation may have come in time for Westerwelle -- but it's too late for his party."

"Westerwelle is ending a 17-year era in which he shaped the FDP, first as its general secretary, then as its chairman. The party owes its biggest successes to him, but he is also to blame for its latest slump."

"While in opposition, he took the party back to the market liberalism of the 1980s. He whittled its agenda down to promising tax cuts, populist criticism of welfare cuts and snappy rhetoric against the center-left. His style attracted many non-voters and many who couldn't see what the previous grand coalition (editor's note: the alliance of the conservatives and Social Democrats headed by Merkel from 2005 to 2009) stood for. But a party that keeps on promising lower taxes when it's opposition must honor that pledge when it gets into government. No one believes in the FDP's tax-cut proposals -- but it no longer has anything else to offer."

"His successor will have to force a party devoid of policy ideas to conduct a painful debate about what it wants to stand for in future. The FDP must decide whether it wants to become more social, more pro civil rights, more ecological, more pro-business or more EU critical -- without becoming indistinguishable from other parties. No one needs a copy of the Green Party."

"The party only has two years to find its new identity. The next general election is scheduled for 2013. That may not be enough time -- for Westerwelle's successor and the entire FDP."

"Under Westerwelle the FDP turned into a single-issue party that only stood for tax cuts. It turned into a clientele party representing high-earners."

"One central problem of the FDP is the success of liberalism: the idea of individual responsibility and emancipation is something the Greens and conservatives stand for as well. In a liberated secular society with ample individual liberties, a liberal party is no longer seen as essential. And the Greens can take on the kingmaker role the FDP used to play in the game of German coalition politics when it would shift between alliances with the conservatives and with the SPD."

"What happens now? Many professionals still regard the Greens as too ecological and the conservatives as too state-oriented, social or religious.... But this voter base is shrinking. The liberal story about guaranteeing personal freedom is looking out of date. Would Germany miss the FDP if it weren't around anymore?"

"A cascading decline in credibility, a series of election defeats, disastrous popularity ratings -- no top politician can survive all that for long."

"If Westerwelle had resigned last December, his prospects of remaining foreign minister would be better now. But he gambled on hoped-for electoral success in Baden-Württemberg and Rhineland-Palatinate. And he lost."

"Only if the FDP quickly finds a new leadership and rallies around it will it have a chance in the next general election. The question is: Can Guido Westerwelle still belong to such a team?"

"In the future, Germany will be represented by a foreign minister whose party no longer wants him as boss. True, Chinese, Libyan and Afghan government leaders are unlikely to read media reports about FDP executive meetings. And a minister doesn't necessarily have to be leader of his party. But if one is forced to resign from one post, it will be difficult to carry out the other with total authority."

"Westerwelle's focus on his ministerial job will open up fresh room for maneuver for him. His great role model, Hans-Dietrich Genscher, was a highly influential foreign minister even without having a party post. Westerwelle's successor and his new team will have a tough road ahead. The benchmark of their success will be the 14.6 percent vote Westerwelle scored at the last general election. The time may come when the new leadership wishes Westerwelle had never left."

"Despite all its failings, the FDP used to have the reputation as a wise, clever party. That attracted voters. It no longer has this pulling power."

"In its heyday, the FDP was a fertile opposition within government: in the conservative governments of Konrad Adenauer and Ludwig Erhard, the FDP left its mark as a party of democratic justice, and in the center-left governments of Willy Brandt and Helmut Schmidt, it was the guardian of market economics. The FDP was a guarantor of continuity in the changing governments of the republic. Its decline began under the government of Helmut Kohl: since then the liberal path has been one of intellectual withdrawal."

"One should mourn the decline of every democratic party. Its passing also removes a piece of democratic tradition. If a newspaper folds, it's a blow to the freedom of the press. If a party dies, as the FDP is at risk of doing, it's a blow to party democracy."

15 Bilder Photo Gallery: The Rise and Fall of Guido Westerwelle