The German government has an obvious talent for stepping on its own feet. On Monday Philipp Rösler, the nation's vice chancellor and economy minister, published a panic-inducing editorial about the euro crisis that dissented from Chancellor Angela Merkel's official government line. Rösler is second in command to Merkel but relatively new at his job, and he leads the junior coalition party -- the business-friendly FDP, which has been losing support at the polls even faster than Angela Merkel's CDU.

"There can no longer be any taboos," he argued in a guest column for the conservative daily Die Welt. The euro crisis may lead to "an orderly bankruptcy of Greece, if the required instruments are available," he wrote.

Letting Greece go bankrupt is a touchy subject in Berlin. The idea of not saving Greece is popular among ordinary Germans, who are skeptical about sending more German public money to Athens, but unmentionable in government circles, because of worries that loose talk could cause turmoil on the financial markets.

Markets, sure enough, reacted on Monday by falling. Chancellor Merkel gave a statement to German radio: "What we don't need is disquiet on the financial markets," she said. "There is already enough uncertainty." Rösler's critics accused him of taking a populist line to save his party's standing in the polls. Other politicians in the coalition government have come out in support of his comments, however.

The dust-up has called Merkel's coalition gravely into question. The German debate over the euro has been heating up this month because of a vote due Sept. 29, when the parliament decides whether to approve new powers (and more money) for the euro's bailout mechanism, the EFSF.

But doubts about Merkel's government make a difficult process even trickier, as German commentators pointed out on Thursday.

"One of the oddest details of the euro crisis may be that the German economy minister -- normally a quiet, introspective role -- has become over-important. When Philipp Rösler's remarks about Greek bankruptcy first came to light on Sunday evening, markets and governments around the world reacted nervously. The reason for this chain reaction is that in many parts of the world it's not well known that a German economy minister actually has very little to say -- and that Rösler is simultaneously the leader of the junior coalition party."

"The FDP has slowly become a party that no longer believes in saving the euro. As a result, it may have to excuse itself from the German government."

"When does time run out for a coalition? There's no clear answer ... A coalition isn't a book, where the reader can check how many pages are left to plow through."

"In the relationship between Merkel and Rösler, this much is clear: The vice chancellor published an article during the middle of a crisis that surprises the chancellor and departs from her public position. The chancellor reprimands him, not vehemently, but clearly enough for voters to notice. The vice chancellor defends his position. It's not a question of who's right. The problem is that such a coalition hardly seems viable."

"Snap elections would (also) be a problem … because France faces a presidential election early next year. Europe can't afford to have politicians in its two largest nations merely go through the motions of politics for the next few weeks or months. The FDP doesn't seem prepared to pull itself together, so the center-left Social Democratic Party may have to help Merkel in parliament. This appears to be the chancellor's only ray of hope."

"The decision (on Sept. 29) is not just about the European currency, which would be drastic enough, but also about the credibility of Germany and the future of European unity. It's also about the viability of the current Merkel-Rösler government. This will crumble if the coalition can't manage to win a majority of votes."

"The supporters of continued European integration are starting to turn the controversy over euro-rescue mechanisms into a debate over where the EU should go. They warn that populist attacks against Greece won't help a party win elections or make a positive impression."

"Everyone's talking about the FDP and its cheap populism. But hold on -- it's a good populism, because the issue here has large dimensions. The question is not just one of maintaining power, or government loyalty and majorities in parliament for the chancellor. The question is about much larger issues like the future of Europe and the health of Germany. It's a question of attitude, and whether to reassert such noble principles as avoiding debt, taking responsibility for mistakes, and protecting public funds -- principles which every state institution and every responsible politician must honor." 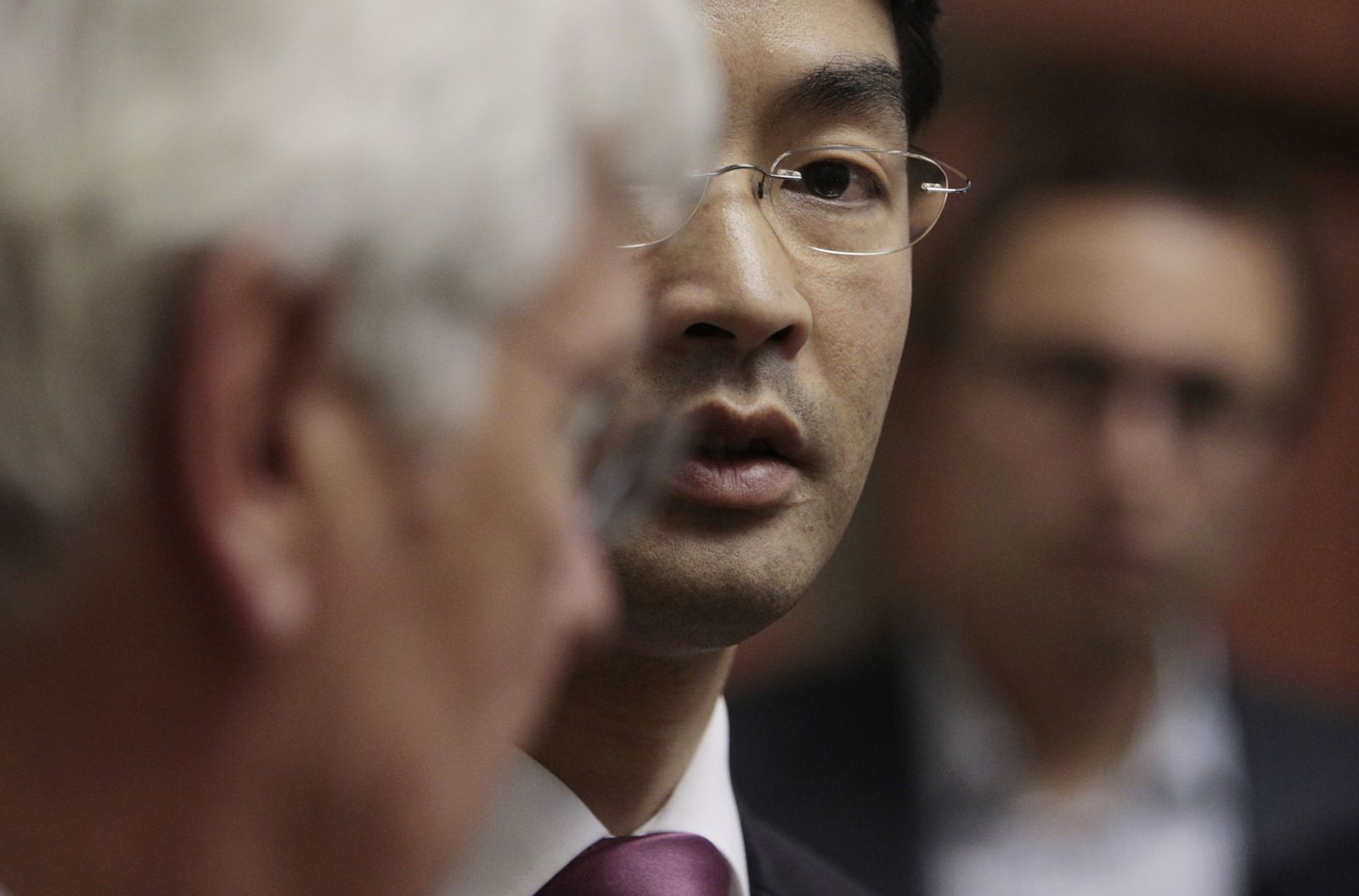 German Economy Minister Philipp Rösler, seen here during a visit to Rome on Wednesday, is under pressure.