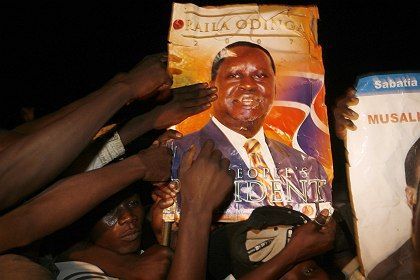 After a month of rioting and ethnic violence, Kenya's government has agreed to form a coalition government with the opposition. On Thursday, President Mwai Kibaki and the leader of the opposition "Orange Democratic Movement" (ODM) Raila Odinga signed a power-sharing agreement in Nairobi, ending the bloody tumult that resulted from the elections on Dec. 27.

The deal signed on Thursday was brokered by former UN General Secretary Kofi Annan after more than a month of negotiations between the two parties. On Tuesday, Annan gave up in exasperation and suggested the two leaders talk directly with each other.

The new agreement provides for the creation of a new prime minister post, which will be assigned to Odinga. The opposition leader claims that Kibaki originally promised him the position when he helped Kibaki get elected for the first time in 2002. The deal also assigns cabinet posts based on each party's number of seats in parliament and will create deputy prime minister posts for both parties. The deal also foresees a review of the 45-year-old constitution, which grants the president virtually unchecked power over the state and which many Kenyans have been agitating to change since the 1990s.

The international response to the announcement has been positive. "The signing of the agreement is a shining example of how Africans themselves can find peaceful resolution to their political challenges," said South African President Thabo Mbeki.

US Secretary of State Condoleezza Rice, who assisted in the negotiations, said in a statement that "the Kenyan coalition government and people can count on (US) support as they move forward to implement the agreement and reform agenda."

European Commissioner for Development and Humanitarian Aid Louis Michel likewise praised the deal. He said that Kibaki and Odinga "have shown the wisdom and vision to choose the path of compromise and reconciliation."

The agreement is a major victory, given the degree of animosity between the two leaders. After Kibaki was sworn in as president on Dec. 30, Odinga accused him of having rigged the elections. Kibaki insisted that he won fairly and blamed Odinga in turn for inciting violence. At least 1,000 people are thought to have been killed, and 300,000 forced to leave their homes in the violence that followed the elections. East Africa's largest economy was severely damaged.

The German media applauds the agreement but fears that this dark chapter in Kenya's history is far from ended.

"It must have been their horror at the violence that they themselves unleashed that caused the two opponents to look for a solution. What would have been left for them to govern, had they allowed it to continue? Destroyed cities, frightened citizens, looted camps, empty hotels, slums controlled by gangs."

"The descent into hell has been stopped, but the return will be tricky, because the details of the division of power have yet to be worked out. The parliament has to pass the reform, new posts are to be filled -- by consensus. And that's harder to find in Africa than elsewhere, because behind every decision lies the same logic: to first serve the interests of the family, then those of the country. Relatives and friends are more important than competence. That's how deep the roots of the problem lie."

"It's too early to announce the end of the crisis. The new government has yet to be formed. And it's not at all clear that the hardliners on both sides are going to accept the compromise. On both sides, militant groups that could plunge the country back into chaos are being trained and armed. The ethnic conflict between the Luo, Kalenjin and Kikuyu continues to smoulder and could ignite as soon as the first political process gets blocked. The bloody raids and mass expulsions of recent weeks have left their mark on the country. And it's going to be a very long time before the enemy groups are reconciled, despite political agreements."