German football fans were left stunned as their women's team suffered a shock exit from the World Cup, losing their quarter final to Japan on Saturday night. The defending champions and hosts had been expected to take home their third Women's World Cup title in a row, and event organizers in the country relentlessly hyped their abilities, pinning them with the task of attracting new fans to the sport.

But the team failed to live up to expectations, losing 1-0 to Japan in a nail-biting match in Wolfsburg which went to extra time.

"What just happened is surreal," said goalkeeper Nadine Angerer, who managed to make it through the last World Cup tournament four years ago without conceding a single goal. But this time round, the 32-year-old allowed four goals despite having home advantage. Japan's winner was scored in the 108th minute by forward Karina Maruyama, and was met with shocked silence by the sold-out crowd of some 26,000.

The loss was a bitter letdown for fans and the German players, a number of whom seemed unable to leave the pitch after the game. "The disappointment is great," said German Football Association (DFB) President Theo Zwanziger, one of the most outspoken proponents of increasing women's profile in the sport, after comforting the team. "But the sport brings victories and defeats. I can't remember the last time the German women's national team didn't score a goal against a strong, but not overwhelming opponent in 120 minutes."

Still, the team had struggled to find the right line-up and rhythm in their first few matches in the tournament, and even after their much-celebrated 4-2 victory over France last week, coach Silvia Neid wasn't able to steer them to their next win.

"I have no idea what to do next," said advertising star and midfielder Fatmire Bajramaj, who sat out the game. "Everything is off today. And it's unbelievable. We're going home while the World Cup continues for others."

The defeat also means the German women have failed to earn a slot in the 2012 Olympics in London, a stinging reality that 47-year-old Neid tried to put a positive spin on, saying it would give the team more time to prepare for the European Championship in 2013.

On Monday German commentators attempted to make sense of the loss. While many said the hype and expectations had put too much pressure the team, they also insisted that tournament itself is paving the way for higher profile women's football in the future.

"For the first time Germany is shocked by a women's team losing a game. What sounds sad at first is actually good news. Women's football is finally accepted by the masses. Suddenly Germany is suffering with its girls. An unbelievable 16.95 million viewers watched their match against Japan -- a TV record for our women's team. Their natural presence and dedication convinced us all. Their tears after the bitter loss moved us all. Bravo, girls. You've won your most important battle -- that against the men's world."

"That the team, coached by Silvia Neid, displayed technical and tactical playing that was anything but flawless? Never mind! Germany has new favorites -- and at the beginning they can be forgiven."

"Not every women's team can beat every other, but the number who have played or are still playing for the title is considerable: the technically and tactically accomplished Japanese, the strong French, the athletic Americans, the plucky English, Marta's solo performance … and even the Germans, who did not prove to be unbeatable."

"With this the Women's World Cup has had its first sensation. And it is the unpredictable that lends a bit of magic to this sport … At the same time it is too bad that Germany is out of the tournament right at the moment general interest began catching up with the media coverage. As such, a loss in the semi-final or final would have been better. But that's football."

"And next time it could be totally different or just the same. That's wonderful -- and it's the best realization of this World Cup. Women's football isn't some other sport, but just football."

"The Women's World Cup was supposed to take women's football into a new dimension. The third title in a row for the German women wasn't the only unbelievably ambitious goal that was to be met with lots of effort and a good portion of luck … Anything but German participation in the final wasn't anticipated in this plan."

"The elimination of the German team and the emptiness in which they now find themselves shows how the dimensions of women's football have been misplaced in this World Cup. Many have become the victims of excessive demands, because the show grew larger than its main actors could imagine."

"Now that all of the (German) fan flags are being packed up, the real worth of the Women's World Cup will show itself. Because sport means playing without knowing the final outcome -- even if the organizers didn't plan for the elimination of the German team."

"With its matured international class of never-give-up Americans, strong Swedes and nimble Japanese, women's football doesn't need hyperbole. This World Cup has been exciting as it is and can continue to be so -- because the games are characterized more by a love of the sport than tactics, and because many players celebrate with disarming sincerity and speak with stunning honesty."

"Women's football has reached millions of television viewers and beer garden fans, and awakened emotions in many hearts … This World Cup is a victory for the sport, even for the coming week. Even without a German team that failed to earn a spot in the final."

"It's difficult to become a fan of women's football. Marketing strategists want thrust a "new premium sport" onto us."

"Yes, women too can fire in a decent cross. They can excite people with their play, at least for moments in this highly praised World Cup. But these moments are as easily forgotten as the Olympic luge. One might as well go see a musical."

"The 4-3-2-1 formation, forechecking, short ball possession and a pressing game -- the women have co-opted every chic tactical move from today's high-velocity world of men's football, but the technical capabilities of their game pace are often lagging behind. The result is not an attractive, autonomous sport, but a bad cover version, low-level excitement at best. Women's football must emancipate itself from the male model to earn enduring regard. Ultimately the female players don't want to be measured against men either. Why don't they create their own game system, why do they have to start playing dirty?" 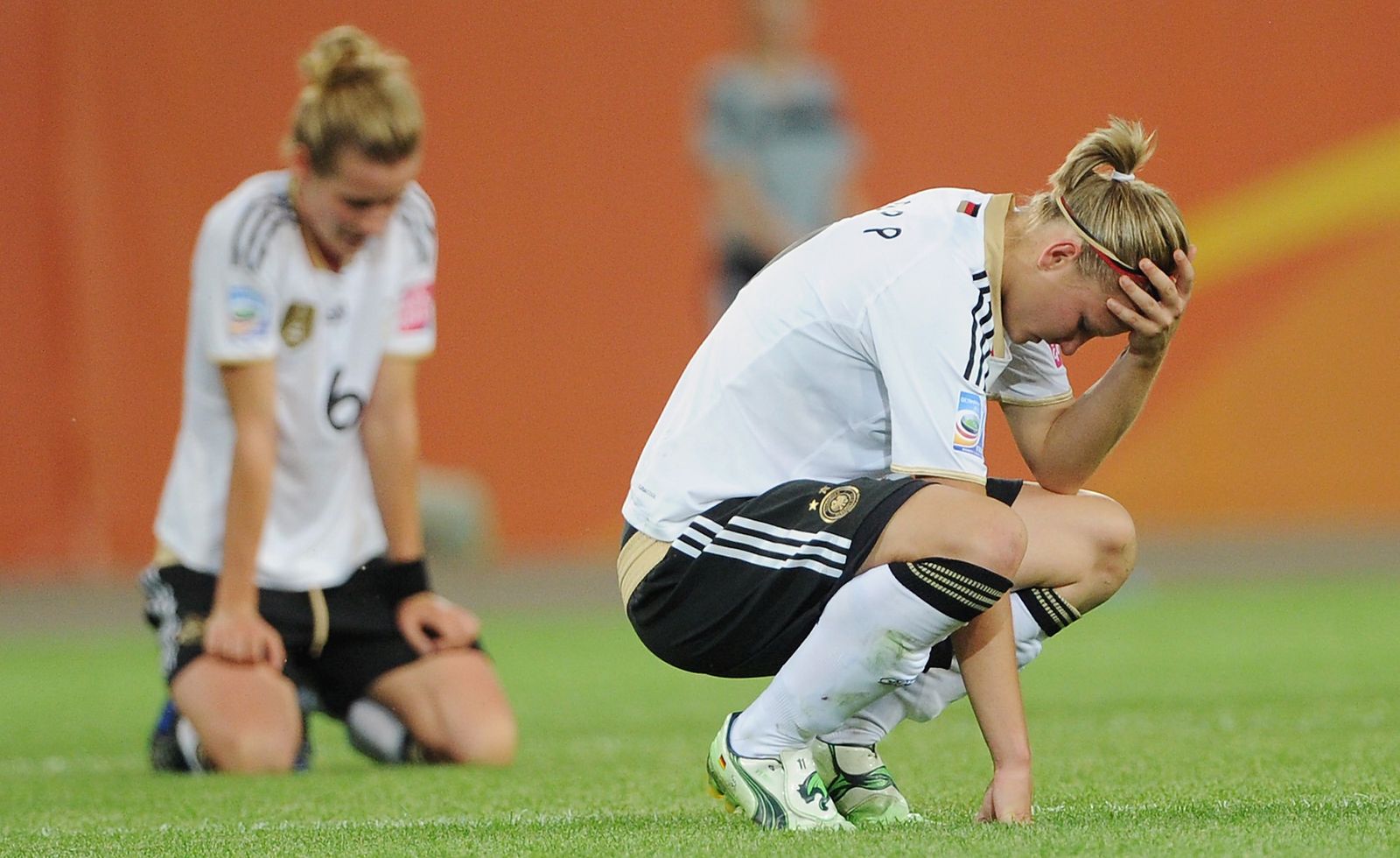 Germany's Alexandra Popp (R) and Simone Laudehr after the quarter-final loss against Japan on July 9. Was the pressure too much for them?