Hamed Abdel-Samad has been through several phases in his life. At 16, after graduating from high school, he hugged his mother, shook his father's hand and set off for the Egyptian capital Cairo -- a gifted young man who wanted not only to educate himself, but also to change the world.

Today, he describes the first decision he had to make: "Do I join the Marxists or the Muslim Brotherhood?" His father was an imam, and so he took up with the Marxists, or "Muslim brothers without God," as he likes to call them. After less than a year, he had had enough of the godless revolutionaries and joined the true Muslim brothers. They accepted him with open arms and offered him everything an alert and searching spirit needs: spirituality, camaraderie and companionship. His father had already taught him how to read the Koran, but with the Brotherhood he learned how to translate its teachings into practice, for Allah and the victory of Islam over the infidels. His favorite pastime was to march with the Brotherhood during demonstrations, waving the flag of the Prophet and shouting: "Death to the Jews!" 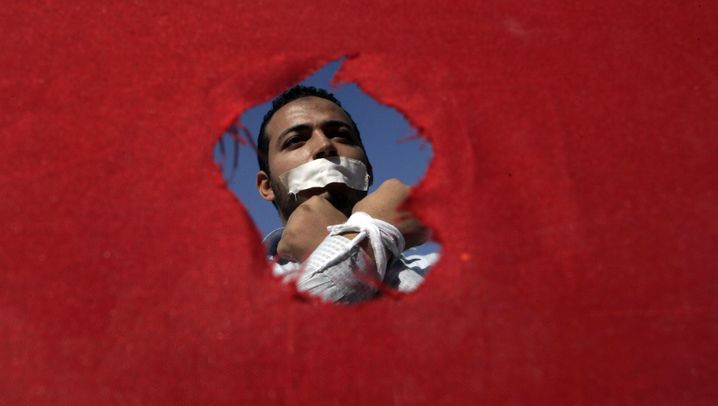 Today, less than 20 years later, Abdel-Samad lives in Munich, where he is married to a Danish woman and works for the Institute for Jewish History and Culture at the University of Munich. The title of the doctoral dissertation he is currently writing is: "The Portrayal of Jews in Egyptian Schoolbooks."

His astonishing story has about as many twists and turns as an adventure novel, an Arab version of Thomas Mann's novel "Felix Krull." But Abdel-Samad is neither a literary man nor a con man. He has merely written down his experiences in his book "Departure from Heaven."

In the account, he describes his path from an Egyptian village to Europe, the fate of a Muslim immigrant and his transformation from a religious zealot to an enlightened intellectual. His story is unique, extreme and yet somehow exemplary. The book, says the author, tells "a completely ordinary story, the kind of story that happens thousands of times." What is so unusual about it is that a young man like Abdel-Samad had the confidence to tell his story to others.

The Tyranny of Tradition

This sort of an account is more common among women. Men, on the other hand, says Abdel-Samad, would much rather recount their heroic deeds than tell the story of how they were beaten, abused and raped, how they suffered and still suffer today, and how much effort it took to free themselves from the tyranny of tradition.

This is precisely what Abdel-Samad has done.

He was born in 1972, the third of the five children of an imam living near Gizeh, and his destiny was to follow in his father's footsteps one day.

He studied English and French at the University of Cairo, took a job at the airport and, by coincidence, met a German tourist who invited him to visit her in Augsburg in southern Germany. The two married, but not out of love. She was 18 years his senior and divorced. For her, the marriage meant qualifying for tax benefits for married couples, and for him it meant acquiring a German passport. But the marriage didn't last long. The cultural differences between the two were even greater than the age difference.

In his book, Abdel-Samad marvels at the "excessive alcohol consumption of the Germans," who "work like animals and enjoy themselves like animals." Germany seemed strange to him, "like a complicated device, for which there are no operating instructions." In only four months, he learned German, how to "swim and ride a bicycle," and how to use terms like "self-conquest" and "working on your relationship."

He passed a qualifying examination to study political science at the University of Augsburg and plunged into "this cursed freedom." His master's thesis, titled "Radicalization in a Foreign Country," is about young Muslims in Germany who emerge from "unconditional religiosity" and into isolation, taking every opportunity to feel "resentful and humiliated." In writing his thesis, says Abdel-Samad, he realized that the problems of these young Muslims could not be attributed solely to the frustration of being in a strange land. "The constant feeling of being insulted is our swine flu. Every day, we think about who or what has offended us. People are frustrated throughout the Arab world. They don't know what to do with their rage, and they look for scapegoats."

Abdel-Samad was like that once -- angry and constantly searching for someone to blame for his misfortune.

It was impossible to direct his anger against his parents, even though he had been abused by his father and had to look on as the father beat his mother. But that was considered normal, something all men and all fathers did. When he was four, he was abused by a 15-year-old, but he had no one to confide in. He was raped again at 11, this time by a gang of older students. Again, he could confide in no one, so as not to bring disgrace on himself and his family. His life was shaped by a single thought: "What one has to do to not lose one's honor."

Abdel-Samad's sisters were both 16 when they left school to marry their significantly older teachers. One sister became a grandmother at 38, and the other at 34. It was all considered completely normal, as long as women remained virgins until marriage. Those who didn't marry were left with nothing but escape into fantasy or religion. On Fridays, as Abdel-Samad writes, the "mosques are filled with these young people living in a sexual state of emergency." Social conditions also affected relationships between people. "Everyone suppresses everyone else. The government suppresses the people, and the people suppress each other."

It took Abdel-Samad a while to extricate himself from this cycle. During his studies in Augsburg, he decided to spend a year in Japan, where he learned Japanese. "I wanted to get away from Europe, away from Islam, away from everything." At a conference in Kyoto, he met his current wife Connie, whose mother is Japanese and father is Danish. Born in Copenhagen, she studied philosophy in Japan and plans to do her doctorate on Sartre and Kierkegaard.

The Epitome of Multiculturalism

After completing his degree, Abdel-Samad worked at the United Nations Educational, Scientific and Cultural Organization (UNESCO) in Geneva, then in the Islamic Studies Department at the University of Erfurt and, finally, at the Institute for International Textbook Research in the northern German city of Braunschweig, before historian Michael Brenner offered him a position at the University of Munich in the fall of 2008 -- at the Institute for Jewish History and Culture, of all places.

Abdel-Samad is the epitome of multiculturalism. "If not me, who else?" he says. "I do what suits my biography. I offer my life." It is telling that in his youth, he was a "genuine anti-Semite," even though he had "never even met a Jew."

In his memoir, recently published in German, he has written about his life from the depths of his soul. It all happened by coincidence. Once, while he was in the hospital, Abdel-Samad began to write, with no concept or notes, sometimes in German and sometimes in Arabic. Eventually, he says, "the book resembled me."

He gave the manuscript to a friend to read. The friend offered it to a small, independent publishing house in Cairo -- as a novel, because anything else would have been too dangerous. Almost all major Egyptian newspapers discussed the book, and its publication prompted a group known as Nusrat al-Islam (Support of Islam) to issue a fatwa, which has remained without consequences to date. The book did cause an uproar in Abdel-Samad's native village, where some residents wanted to burn the book. This, in turn, prompted his father to ascend the pulpit for the first time in more than 12 years to defend his son. He had stopped giving sermons when Abdel-Samad left Egypt to go abroad, out of shame that he had failed as a parent.

'I Haven't Come Here to Enrich You'

He isn't exactly proud of his son today, and yet, says Abdel-Samad, "he respects what I do." Only Abdel-Samad's mother behaves as if nothing had happened. She refuses to acknowledge the fact that her son is no longer a religious person, and that he has turned away from an "angry, unpredictable God. For her, all that matters is that she can occasionally embrace him and cook for him again.

And Abdel-Samad? Has he found peace? The more he thinks about himself, the more distanced from Germany he feels. At a recent conference of do-gooders, the conversation turned to foreigners who are "culturally enriching" Germany. Abdel-Samad stood up and said: "I haven't come here to enrich you. I left my country so that I could live in freedom."

Abdel-Samad doesn't divide people into friends and foes, but into those who love freedom and those who allow themselves to be enslaved, whether by a religious or a secular ideology. He still knows the Koran by heart, but he hasn't been to a mosque in a long time. Still, when he orders a burger, he asks for it without bacon. "I am a Muslim who has converted from faith to knowledge." he has read Kant, Hegel, Spinoza, Kafka and Tocqueville, but he can also differentiate between various German beers -- among brands like Paulaner, Franziskaner and Erdinger hefeweizen -- which, in Bavaria, is an important sign of successful integration.

When asked how he reconciles his current life with his past, he turns the question around and asks: "Excuse me, am I not Muslim enough for you?"

"Mein Abschied vom Himmel" (My Departure from Heaven: Notes on the Life of a Muslim in Germany) was published in German this week by Cologne's Fackelträger Verlag. An English translation has not been published.