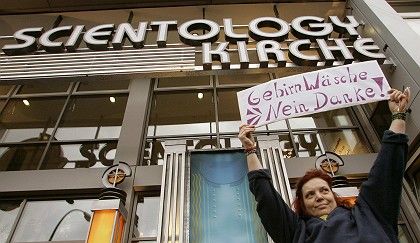 A woman in January 2007 protests the grand opening of a Scientology office in Berlin. Her poster reads: "Brain Washing -- No Thanks!"

For about a decade the German government has kept tabs on Scientologists -- examining their tax returns, surveilling their activities -- on the suspicion that Scientology, as a movement, may be threatening basic principles of the German constitution.

Scientology sued the government in 2003, arguing that its members belonged to a legitimate church and had no political ambitions. A state court disagreed, and on Tuesday an appeals court upheld that ruling. The verdict means that the German government, at least for now, can keep the Church of Scientology under surveillance within Germany.

"There are concrete indications that the plaintiff (Scientology), as well as its members, maintains ambitions against the free, democratic basic order," said a statement by the North Rhine-Westphalia Higher Administrative Court on Tuesday. It added, however, that the verdict "specifically left open whether Scientology is considered a religious organization" or a business.

Apart from the lawsuit, there's movement within the German government to ban Scientology altogether. But experts have said Scientology may not pose enough of a threat for a total ban.

Evidence against the Church of Scientology in this case included brochures called "The Way to Happiness," part of a worldwide project called "Operation Planetary Calm," which aims to spread Scientology's principles around the world. A brochure was even sent to German Interior Minister Wolfgang Schäuble, whose office watches Scientology and any group it deems a threat to the Germany's constitution, including neo-Nazi parties and anti-democratic Muslim organizations.

Other items of evidence included texts by Scientology founder L. Ron Hubbard, the science-fiction author who died in 1986. Some of his writings, the government argued, inveigh against democracy. Other passages detail how and when ex-members and critics of Scientology should be harassed.

Scientologists assembled their own collection of writings to argue that Hubbard was a peaceful man and that the government had quoted him out of context.

The Higher Administrative Court on Tuesday said, however: "There are concrete indications that Scientology's activities are to implement Scientology's program in Germany and to expand more and more Scientology's principles in government, economy and society."

Sabine Weber, a Scientology spokeswoman in Germany, told the Associated Press that her group would appeal the decision to a federal court.

"Despite over 10 years of intrusive investigation and harassment of Scientologists, not one shred of evidence has been uncovered to justify this politically motivated investigation," said the public affairs director for the Church of Scientology, Karin Pouw, also according to AP.