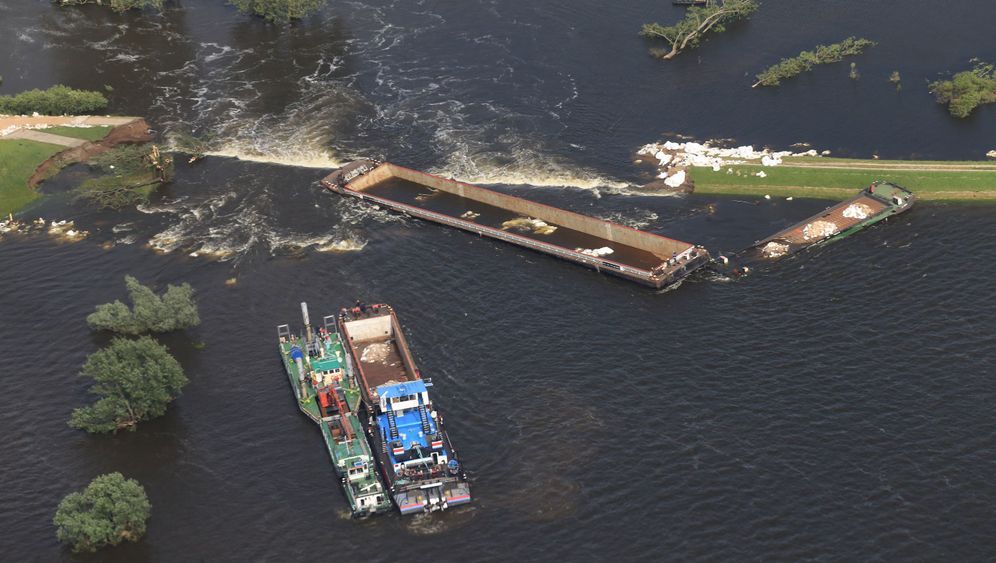 The fight against the record floods that have struck Germany over the last two weeks is largely over, with rivers having returned to their banks and clean-up well underway. But in one part of the eastern state of Saxony-Anhalt, the battle continued over the weekend -- and it was one in which authorities were forced to come up with an unorthodox method to plug a breach in an Elbe River dike just east of Berlin.

On Saturday, two barges were sunk using explosives at a gap in a levee in an attempt to stop floodwaters from continuing to flow into the countryside. On Sunday, an additional barge was sunk at the site to block up the final 20 meters (66 feet) of the 90 meter breach. Helicopters carrying oversized sandbags and pieces of concrete then filled in around the sunken boats. Officials on Sunday evening said that the gap had been 80 percent sealed as a result of the operation.

The spectacular fix became necessary after the dike gave way last week, flooding several small towns behind the dike and resulting in thousands of people being evacuated. Now that the water has ceased flowing from the swollen Elbe through the gap in the levee, the flooded area behind it has begun to slowly shrink. Still, some 145 square kilometers of land (56 square miles) remain under water.

'Power to Stop the Water'

It was the first time ever in Germany that sunken ships were used to plug a hole in a dike. The barges were carefully maneuvered into place before explosives on board were detonated so as to ground the craft. Then, several helicopters began flying gigantic sacks of sand to the site to prevent the barges from drifting away.

"It was an extremely difficult and risky operation," Saxony-Anhalt Governor Reiner Haselhoff told German news agency DPA. "But we had to do something and to try everything in our power to stop the water."

Captain Thomas Peter, who maneuvered the barges into position, said: "We'd never done such a thing before. But we're not crazy. We were able to half-way assess the situation."

Elsewhere on the Elbe River on Monday, officials reported that water levels were well down from their peaks and were continuing to drop.