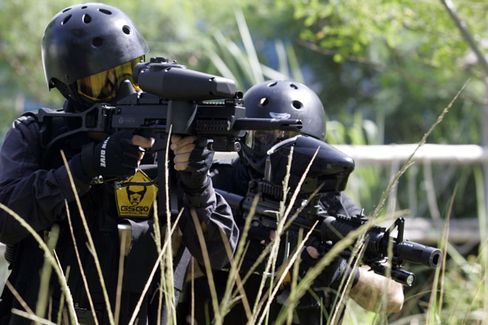 Members of GSG9 paintball team take up positions during a training session in Rio de Janeiro. The team named itself after Germany's elite GSG-9 anti-terrorism force. Will these players soon be forced to give up their game?

Two months after the deadly school shooting in the southern German town of Winnenden, the German government is planning to ban paintball. The tragic March event saw a young man named Tim K. shoot 15 people before turning his gun on himself.

According to reports in the Berliner Zeitung and Neue Osnabrücker Zeitung newspapers on Friday, games like paint ball and laser tag are to be banned in Germany in the future, and people who violate the law could be fined up to €5,000.

"These games simulate murder," Wolfgang Bosbach, who heads the conservative Christian Democrats (CDU) in the German parliament, told the Neue Osnabrücker Zeitung. He said a deal had also been reached with German Interior Minister Wolfgang Schäuble.

The German Paintball League claims about 1,000 people in the country are active in the sport and there are more than 200 facilities where it is played. The organization has sought for years to portray the sport as a safe one. At tournaments, players even eschew red paint because of its optical similarities to blood and the guns used in the sport are referred to as "markers."

The head of the league said he was surprised by the plan to ban what he called a "tactical team sport." But "during an election campaign," he said, "politicians are always looking for a fall guy."

Supporters of the ban argue that the shooting of paint cartridges at speeds of up to 60 meters per second, reduce a person's inhibition to committing real crimes. "There's a risk that these so-called games will play down the danger of violence and that it will erode barriers to committing violence," said Dieter Wiefelspütz, the domestic policy point man in parliament for the center-left Social Democrats (SPD).

The government has been under pressure to act since the mass killings two months ago. A German Interior Ministry spokesman said Thursday that the government hoped to pass new weapons control legislation before the end of the current term. A political agreement is expected next week and legislation would have to be introduced by the end of May in order for it to be voted on in both of Germany's federal legislative chambers before the summer break in July.

The interior minister of the eastern German state of Saxony-Anhalt, Holger Hölvelmann, welcomed the government's plans. He argued that the game was tantamount to "teaching people to kill" or "playing war." "Our society," he said, "should outlaw such cynical games that glorify violence."

Meanwhile, Claudia Roth, the chairwoman of the Green Party, described the proposed tightening of weapons laws as a "courage-less concession to the gun lobby." Instead of banning large calibre guns in general, the coalition government has only managed to agree on a token ban on paintball." By doing so, she said, "the coalition is tightening weapons laws in areas that are the least painful to the gun lobby."

Her party's legal affairs expert, Jerzy Montag, said that while he is no fan of such games ("Do you really need to shoot paint at other people?"), he didn't see any advantage in banning them. "The real issue is the millions of guns kept in peoples homes and at sporting clubs," he told SPIEGEL ONLINE.

During the debate over Tim K., his passion for paintball was much-discussed. But it was soft-air guns that were found in his bedroom. They can also be used to shoot paint-filled pellets, but they are far more similar to actual weapons than paint guns.

The debate over paintball is not new. The German company "Mydays.de," markets paintball as the "ultimate nerve game and the latest sporting trend." But again and again, paintball makes the headlines because it is played at events in Europe held by right-wing extremists or military freaks. In 2007, photos circulated of the head of Austria's right-wing FPÖ party, Heinz-Christian Strache, playing paintball in uniform with a group of right-wing extremists. Press reports spoke of Wehrmacht-like exercises, a reference to Hitler's military, but Strache played the event down, saying he had just been playing paintball.

Childish, maybe. But criminal? No.

Konrad Freiberg, chairman of the Germany police union GdP, said he doesn't think much of banning simulated fighting games. "People may consider this type of extracurricular activity childish or dumb, but I would dare to doubt that it has any criminological connection to serious crimes," he told SPIEGEL ONLINE.

For his part, Rainer Wendt, the head of the German Police Union (DPolG), says it would be difficult to implement the plans. "Politicians are the only people who think they can alter reality by filling up so much paper," he told SPIEGEL ONLINE. He said a ban would make no sense if it could not be enforced. "It has to be made clear to everyone that police in Germany have no time to go out chasing paintball players in forests and fields."

Paintball fans have also up in arms over the plan. "In my opinion, it's just a fun sport that anyone can play, " said Ramona Ruth of Berlin, who opened a paintball field in the town of Angermünde just one month ago. "Twenty to 30 percent of the people who come to us are women."

She said politicians also like to play. Recently, she claims, a group of politicians from the CDU played paintball at her facility.