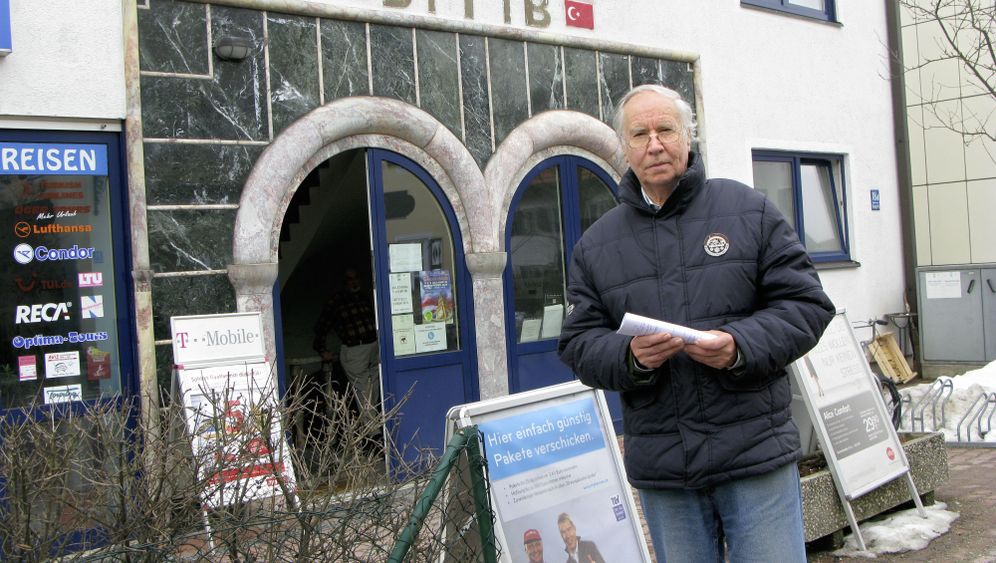 Photo Gallery: Watching the Other

Reinhard Werner is a few minutes early, but because he doesn't want to be noticed, he stands outside on the sidewalk in front of the mosque, trying to look as inconspicuous as possible.

It's Friday afternoon in Munich's Pasing neighborhood and men are scurrying past Werner on their way to Friday prayers. All of them, in Werner's eyes, are enemies. He claims that the mosque is spreading what he calls an "intolerant Islam of terror."

"Do you see the sign over the entrance?" he says.

The letters "DITIB" are printed on the sign. DITIB, an acronym for the Turkish-Islamic Union for Religious Affairs, is the umbrella organization for roughly 900 mosque congregations in Germany. It is controlled by a Turkish government organization based in Ankara, the Office for Religious Affairs, making it indirectly answerable to the Turkish prime minister. "A military mosque," says Werner.

"Do you see that the letter 'I' in DITIB resembles a minaret? And that the minarets look like missiles?" he asks, beseechingly. It isn't always easy for Werner to make himself understood.

Werner is a member of the "Anonymous Mosque Observers," a group of Muslims who fled to Germany from Muslim countries because they came into conflict with religious rules.

Although Werner is not a Muslim himself, nor is he fleeing anything, he feels a kinship with Muslims who have fled their native countries. These Muslims trust their more settled Muslim counterparts about as much as former US President George W. Bush trusted terrorist leader Osama bin Laden. They keep tabs on what goes on in mosques because they want to be sure that they are still safe in Germany.

Werner came to the group in a somewhat roundabout way. For 30 years, he was a teacher at a secondary school in Munich, where some of his classes consisted entirely of foreign students. According to Werner, most of the Turkish students had a negative-to-hostile attitude toward the West. They were hard to reach and difficult to convince, he felt.

Since then, he has been fighting for religious freedom, but insists that it should come with certain conditions. The most important of those, he says, is that Muslims, like members of other faiths, pledge to uphold the German constitution.

Of the 36 mosques in Munich, nine are in Werner's "observation area." He reports everything he sees and hears to the Federal Office for the Protection of the Constitution (BfV), Germany's domestic intelligence agency. The BfV, however, doesn't seem to be taking him very seriously, or at least it hasn't found his reports to be sufficiently convincing to take any action.

After a while, Werner slips into the mosque. In the lobby, about 25 men are drinking tea and eating pita bread as they wait for the service to begin. Werner orders tea, drops three cubes of sugar into his cup and points to a picture next to the tea station. It depicts Ottoman leaders from six centuries. Blood-soaked tyrants are being glorified here, Werner whispers. He points to the second picture from the right in the bottom row and identifies the man depicted as Abdul Hamid II, known abroad as the "Great Assassin."

A portrait of Kemal Atatürk, the founder of the modern Turkish republic and the Turkish army, hangs on another wall, next to a television set. According to Werner, the state and the church are not truly separated in Turkey because the state influences the church and the military influences the state. "Turkey is a theocracy," says Werner.

Then he walks up the stairs to the prayer room. The sermons, says Werner, are often about rejecting the Western way of life.

Just before Werner reaches the door to the prayer room, a young man approaches him and asks him whether he is Mr. Werner. Werner nods.

"You are banned from the premises," the young man says, looking serious. He tells Werner that he must ask him to leave the mosque immediately. It is moments like this that show Werner that his work is at least being taken seriously.

He has acquired a certain amount of notoriety over the years, years marked by the attacks of Sept. 11, the Taliban, the Danish cartoon controversy, the ban on minarets in Switzerland and opposition to the construction of new mosques in Germany. Werner, now 70, had studied the Koran. Suddenly he was considered an expert, and he was in demand.

He is sometimes asked to speak to Christian congregations, but he is hardly ever invited back. Perhaps it's because Werner is so combative. Germans don't like conflict.

And perhaps everything would be easier if social coexistence could be organized the way teams are organized on the football field. Then there would be agreements and rules, and anyone who broke the rules would be penalized. Second-time offenders would be sidelined. But that isn't the way society works, which is why Werner has been fighting his battle for more than two decades.

On his way home, Werner stops at the mosque again to ask why he has been banned from the premises. He hopes to somehow use the ban to reinforce his message. He -- as a representative of Germany, the West and democracy -- feels excluded.

This time an older man with white hair and a white beard is waiting for him. The ban was a misunderstanding, the old man says, and smiles.

A minute later, Werner is standing on the street below the mosque again, relieved that he will be able to continue observing the mosque in the future. But he also seems a little disappointed.

3 Bilder Photo Gallery: Watching the Other