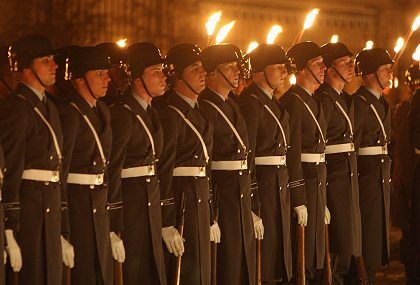 German soldiers on Wednesday celebrated what would have been Stauffenberg's 100th birthday.

Considering he's been dead for more than half of the 100 years since his birth, Claus Graf Schenk von Stauffenberg sure is making a lot of headlines these days. Not only is Tom Cruise playing the colonel, who tried to assassinate Adolf Hitler with a briefcase bomb on July 20, 1944, in the movie "Valkyrie," set to come out next summer. But on Thursday, Germany's Defense Minister Franz Josef Jung honored the courageous young man on the occasion of his centennial.

Stauffenberg's assassination attempt, which took place in the Führer's forest headquarters known as the "Wolf's Lair," was "an act of liberation," Jung said. Moreover, the courageous act formed a model for today's military. "The men of July 20, 1944," Jung said, obeyed "responsibility, honor and conscience" when the military leader was forsaking them. "Very few had the courage that Stauffenberg had," Jung said.

But not everybody is happy with the overblown idolization of Stauffenberg seen in recent months. In a Thursday radio interview, Peter Steinbach -- head of the German Resistance Memorial Center -- warned against "myth formation."

Steinbach noted that any understanding of Stauffenberg, a complex figure not easily reducible to the unquestionable Hollywood appeal of the attempt on Hitler's life, must include the fact that he followed the Nazi cause without qualification for most of his career. Indeed, he rose high in the ranks of the Nazi military, becoming a staff officer during the western offensive against France. Only gradually did he begin turning against the government in 1942 and 1943.

Steinbach's German Resistance Memorial Center honors the men and women who struggled against the Nazi regime and perished because of it. Stauffenberg, along with his co-conspirators, was executed at the so-called "Bendler Block," a historic building complex located at the southern end of Berlin's Tiergarten park that was once the site of the Army High Command.

The street where the Bendler Block stands was renamed Stauffenbergstrasse in 1955, and in 1967 the Berlin Senate resolved to create a permanent memorial to the resistance there.