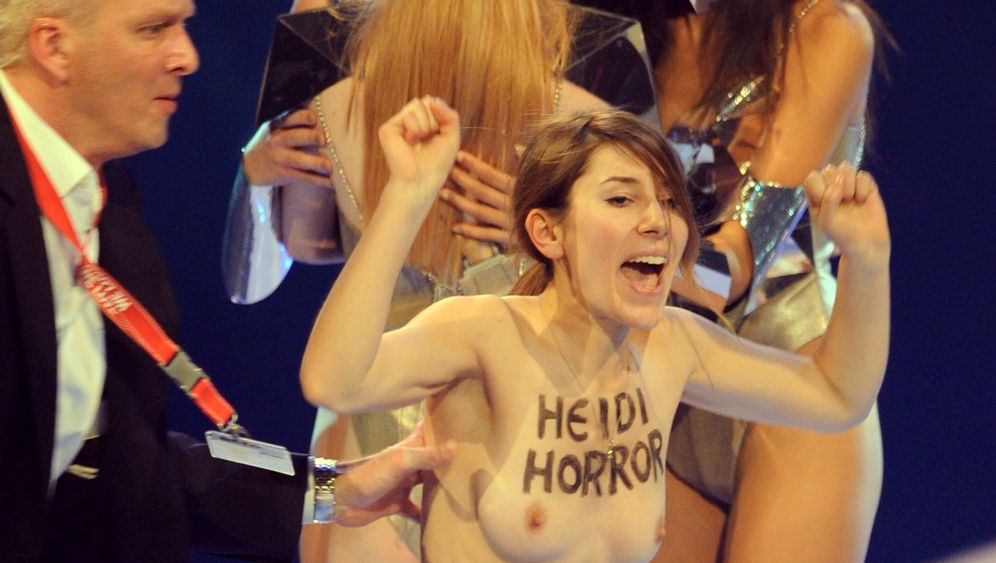 The eighth season of the German hit television show "Germany's Next Top Model" ended with a spectacular finale on Thursday night, but not because of an unexpected winner or other such publicity stunt.

Instead, the twist was a flash of naked skin that for once had not been planned by Klum's production team. For just a few seconds, two topless Femen activists stormed the catwalk, with the words "Heidi Horror Picture Show" printed in black lettering across their chests.

The feminist activists were immediately hauled off the stage by a security team as the television network quickly switched to a different camera. The tumultuous moment appeared on screen for just a brief moment, but was acknowledged by the show's supermodel host and creator Heidi Klum, who said: "I just saw boobs in front of me." Then, because the protesters had chosen a key moment to make their move, just as one of the contestants was being eliminated, she added sadly, "Now, of all times."

Not the First Criticism of the Show

Like many episodes of "Germany's Next Top Model," yesterday's finale was an easy target for feminist criticism. The four finalists had to spend most of the show in scanty clothing, lounge lasciviously on pieces of furniture and shake their behinds during revealing burlesque dance routines. Klum's pep talk also raised some eyebrows. "Be hot, sexy, offer something," she cheered in one part of the two-hour show.

Since the first season of the model casting show aired in 2006, it has been criticized for setting a dangerous example for young women in Germany. Klum has also come under fire for her harsh and condescending treatment of "her girls," as she dubs the show's participants -- many of whom are minors, like this season's winner, 16-year-old Lovelyn.

In an interview with the weekly news magazine Stern this week, Klum said that her job required her to be honest with the participants. "If they want to eat four donuts a week and too much bread and cake, and if their body and skin suffer because of that, then I have to tell them that this is not the right job for them," she said.

In the last several months Femen, which recently established itself in Germany, has repeatedly sought events with a wide audience for their protests at home and abroad. In April, they surprised German Chancellor Angela Merkel and Russian President Vladimir Putin with slogans like "Fuck the dictator" and "Fuck off Putin" written across their half-naked bodies. While Merkel seemed shocked by the stunt, Putin appeared mostly amused. In February, four activists took over the red carpet at the Berlinale film festival in the German capital to protest "sextremism," displaying the slogan "Women are not products."

Earlier this week, three European Femen activists were arrested when the group staged their first protest in the Arab world, rallying topless in front of the Ministry of Justice in Tunis. The demonstration came as a response to the imprisonment of a 19-year-old Tunisian woman who had joined the Femen cause by releasing topless photos with the message, "My body is my own and not your honor" across her chest.