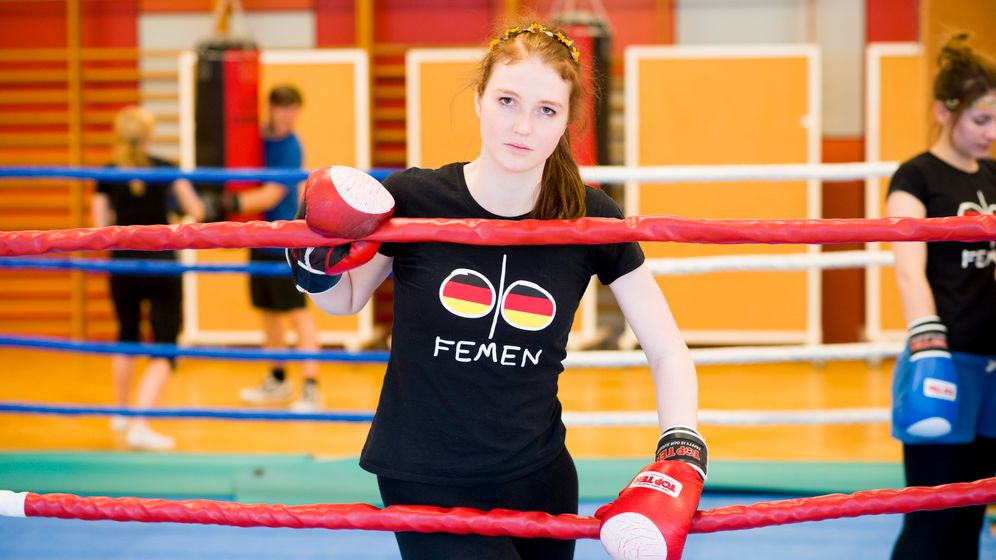 Josephine Witt catches the man off-guard. Her first swing hits him in the face, then she pummels his stomach and beats his ribs. The 19-year-old drives her opponent in front of her, and he forgets for 10 or 20 seconds to hit back. "Keep her busy, Sven!" cries the trainer. Witt's boxing gloves shoot through the air. A wreath of sunflowers adorns her hair. Welcome to boxing training with Femen.

The topless women's rights activists have arrived in Germany. Young women have founded chapters in Berlin and Hamburg, modeling themselves after Femen founder, Ukrainian Anna Hutsol. The militant feminists have taken to the red-light district of Hamburg, protested against the extreme right-wing National Democratic Party in Berlin and most recently screamed at Russian President Vladimir Putin at Hanover's industrial trade fair.

The self-described "sextremists" have trainings for these kinds of protests, including one at a Hamburg boxing club. "We want to learn how to fall correctly, how to quickly dodge security people," says Irina Khanova, who was born in Russia and lives in Hamburg. Even passers-by have attacked the women. "We have to be able to get our message across as long as possible." The trainer nods. "The make-up has to go. You can keep the flower garland."

Femen's mission is to attack the German patriarchy. But all its activities raise a few questions: What exactly is the "message" of the topless protests? The images of young, screaming, half-naked women make the headlines, and the harsh tone ("Fuck Islamism," for example) is provocative. The group is perfect at dominating the media game. But is this the new feminism, or merely a sensationalist gimmick?

On the Saturday training day, Femen's public relations machine is there every step of the way. A camera team from northern German public broadcaster NDR stays all day. Early in the day in the TV studios, the seven young women -- most of them university students -- paint their fighting slogans onto each other.

Witt has "Fuck Dictator" painted on her breasts, like at the recent anti-Putin protest. Hellen, 23, chooses "Woman Spring is Coming," while Anne's upper body says "Destroy Sex Industry." Khanova, who at 33 is the oldest of the group, gives orders: Spread your legs further apart, put your fist vertical in the air, keep the flower garlands parallel to the camera lens. A photographer records everything -- the group's Facebook page is updated with new photos daily.

Then the women are off to Hamburg's main square, where they undress and scream for the TV cameras: "Feeeeemeeennn!" Pedestrians start to whip out their own cameras, some of them smirking. "Oh, the Ukrainians. They're fighting for women over there," says one man.

False, dear sir. The Femen fight is underway in Germany, as well. "The patriarchy in Germany has to be overthrown, too," says Khanova. "We're part of a worldwide movement, and want to address global problems in Germany," adds Witt.

Criticism from Muslims and Feminists

The group has earned its fair share of criticism. After a protest at a Berlin mosque as part of "Topless Jihad Day," Muslim women accused Femen of patronizing them. And after they painted the infamous Nazi slogan "Work will set you free" on the gate to Herbertstrasse, one of Hamburg's main streets for prostitution, in protest against forced sex work, there was head-shaking in the German mainstream and caustic criticism from the feminist scene. The move was dismissed as ridiculous and senseless at best, and condemned as borderline anti-Semitic and Islamophobic at worst.

The activists themselves don't understand that strain of criticism. "Muslim women have earned the same freedom that we have," says Witt, a philosophy student. There are no plans to halt the "Topless Jihad" protests. And yes, they think exploitation in the sex industry is in fact comparable to the forced labor of the Jews. "The scene is leading a theoretical discussion," Witt adds. "We're bringing activism back."

The short manifesto of Femen is as follows: Patriarchy relies on political tyranny, the sex industry and religion. In other words, Putin, Herbertstrasse and the mosque.

Its ideology was also summed up on one Facebook post: "Female nudity, free from the patriarchal system, is the gravedigger of this system, as a militant declaration and a sacred symbol of women's liberation." In addition, no one listened to the women when they were clothed. The Ukrainian group tried it that way for two years with no great success. Since then, the tops have been falling.

During the big debates over sexism, racism and anti-Semitism in Germany this year, Femen was there. For a handful of women who want to be provocative, that's no small achievement. But does all of it serve to promote equal rights?

One accusation is that the activists are playing into sexual objectification and the dominant ideals of beauty. In practice, Femen members are almost exclusively young, thin women. This has become a topic of discussion within the group, as well. Many fear they are scaring away other women. Khanova counters that everyone is welcome to participate, but that older women often find their activism too outrageous.

All you have to be able to do is scream. After the boxing training session, Femen rehearses its form of protest. A blue gymnastics mat serves as an arena for the fight against patriarchy. Witt dashes off, and the moment she has two legs firmly planted on the mat, she raises her arm and roars, "Fuck Putin!" through the gym, so loud you'd think she were screaming all the way to Moscow itself. Four others play the role of the security guards. They grab Witt, she squirms and struggles and keeps screaming just as loud. Seven, eight, nine "Fuck Putins" -- by Femen standards, that's a pretty good protest.

Khanova praises her, and repeats that they have to spread the message as long as possible. She admits she doesn't know how long that's going to work with the Femen method. "Society is desensitized, we have to be more and more provocative," she says. But she doesn't want to worry about it. "It'll keep going as long as it does."