A large entourage of journalists gathered at the Stuttgart airport, awaiting the arrival of the short-statured intellectual. French star philosopher Jean-Paul Sartre's visit to Andreas Baader -- the top terrorist of Germany's Red Army Faction (RAF), the radical left-wing group also known as the Baader-Meinhof Gang -- was a worldwide sensation. It was Dec. 4, 1974.

A Peugeot brought the 69-year-old Sartre to a high-security prison in the Stuttgart suburb of Stammheim. The thinker was initially reticent, but at a press conference after the meeting with Baader, he leveled heavy accusations against the West German government, then under the chancellorship of Helmut Schmidt.

The RAF prisoners were being held in solitary confinement in sound-proofed cells with constant artificial lighting. It was not "torture like that of the Nazis," but "another torture, a torture that leads to psychological disturbance," he said.

Sartre's critique suited Baader and his comrades, who hoped that this prominent visitor from Paris might bring on a wave of solidarity. But the public reaction was devastating. Word spread quickly that the philosopher never even saw the cells at the newly constructed Stammheim Prison, which were equipped with television sets and small libraries.

Today some experts believe that Sartre, who was by then half blind, mistook the meager visitor's room for Baader's cell. Instead of reporting about the alleged suffering of the RAF prisoners, the press wrote about the privileges that Baader, Ulrike Meinhof and other members of the RAF cadre enjoyed during their confinement

There were other respects in which the meeting did not live up to Baader's expectations. Years later, it became clear that the two men clashed. After the meeting, Sartre was said to have complained that Baader was an "asshole." The RAF leader wrote in a secret message to his accomplices that he didn't know whether Sartre had "even understood him." The philosopher and playwright, who won the Nobel Prize for Literature in 1964, gave "the impression of being old."

Yet the details of the conversation between the existentialist philosopher and the dropout from Munich stayed hidden -- until now. At the request of SPIEGEL, the Federal Office for the Protection of the Constitution (BfV) has released a document dated Jan. 2, 1975, which was in the possession of the Baden-Württemberg State Office of Criminal Investigation (LKA). The 10-page paper is of historical significance because it contains a partial transcript of the meeting between Sartre and Baader. According to LKA officials, they contain virtually everything Sartre said and "the most important passages" of what Baader said.

Based on the transcript, there can be no doubt that Sartre took a more critical view of the RAF than his statements at the press conference scarcely an hour later suggested. He repeatedly tried to persuade Baader to abandon his fight.

Sartre: The masses -- the RAF has undertaken clear actions that the people don't agree with.

Baader: It's been established that 20 percent of the population sympathizes with us ...

Sartre: I know. The statistics were prepared in Hamburg.

Baader: The situation in Germany is geared to small groups, both in terms of legality and illegality.

Sartre: These actions might be justified for Brazil, but not for Germany.

Sartre: In Brazil independent actions were needed to change the situation. They were necessary preparatory work.

Baader: Why is it any different here?

Sartre: Here there isn't the same type of proletariat as in Brazil.

The RAF initiated the meeting after Sartre described the Baader-Meinhof Gang as an "interesting force" with a "sense for the Revolution." Ulrike Meinhof suggested that Sartre should interview Baader. Her justification: to make it "a bit harder for the cops" to kill Baader. The RAF member was at that point in the middle of a hunger strike ostensibly with the aim of improving the conditions of her imprisonment. But it was actually an attempt to attract public attention. That's where the world-famous Frenchman came in.

Sartre agreed. According to the political scientist Wolfgang Kraushaar, the former prisoner-of-war of the German army saw West Germany as "a successor state to Nazi Germany" -- and the RAF, as a form of "Résistance."

However, two days before the Stammheim visit, SPIEGEL published an interview with Sartre by prominent German feminist Alice Schwarzer. Weeks earlier, left-wing extremists had murdered Günter von Drenkmann, the president of Berlin's Higher Regional Court, and Sartre spoke of a "crime." To Baader, this was an act of sacrilege.

He gave the philosopher an accordingly chilly reception in the visitors room at Stammheim prison. In addition to the two men, an interpreter, a prison guard and the LKA agent were present. When Sartre opened the discussion by saying he had come "as a sympathizer" and wanted to discuss the principles that Baader was pursuing, the latter replied that that would be "difficult." He had thought he would be receiving "a friend," but after reading the SPIEGEL interview he now thought "a judge is coming."

The tone of the meeting didn't get any friendlier from there. Several times Baader snapped at the visitor: "Any questions?" The scholar appeared not to be showing enough interest in him.

After two heart attacks, Sartre was no longer at the high point of his creative power. But the RAF leader too was suffering from the effects of the hunger strike. Sartre said he seemed "very weak."

Ideological questions had never really interested Baader, whom the writer Hans Magnus Enzenberger once described as resembling a "pimp." Yet he produced a three-page-long, typewritten text that he read out to Europe's star intellectual.

The LKA official wrote: "Upon follow-up questions from Sartre, he read out the same sentence again. When asked to explain certain sentences, he clearly had difficulty. He would then often move on disjointedly to the next sentence."

Baader: The objective process is in conflict … in the offensive the German Left is encircled and isolated. They will be destroyed. That is the deprivation of rights that we are experiencing. They're the implementation of the emergency laws combined with the employment ban for socialists. The emergency state is being prepared in Germany . The offensive in Germany isn't being seen. The tools of capitalist power apply quite naturally. The policies of the class enemy …

Sartre: I can't quite understand that, the policies of the class enemy?

Baader: There are two lines, the faction of capital, that, shall we say, within the framework of parliamentary democracy, and that of weak reformism. We do not equate social rule and politically directed violence. We see the possibility of an openly creeping dictatorship. That is the special situation in Germany. US capital directly enforces that policy.

It's hard to believe that Sartre could wrest any bit of logic from Baader's further stammering about the "counter-revolutionary revolution," "the capitalistic logistics" or the strategy that should be adopted ("City, City, City, Village").

Sartre's words, by contrast, were clear. The political actions of the RAF in West Germany had met with "no echo." Such attacks were "certainly right" in countries like Guatemala, but not in Germany. When Baader proposed that "armed groups" be assembled in France, Sartre contradicted him. "I don't believe that terrorism would be good for France."

The LKA official noted: "During and after the talk, Baader appeared dejected and disappointed that Sartre didn't unreservedly approve of the actions of the Baader-Meinhof Gang." After 60 minutes, the meeting was over. 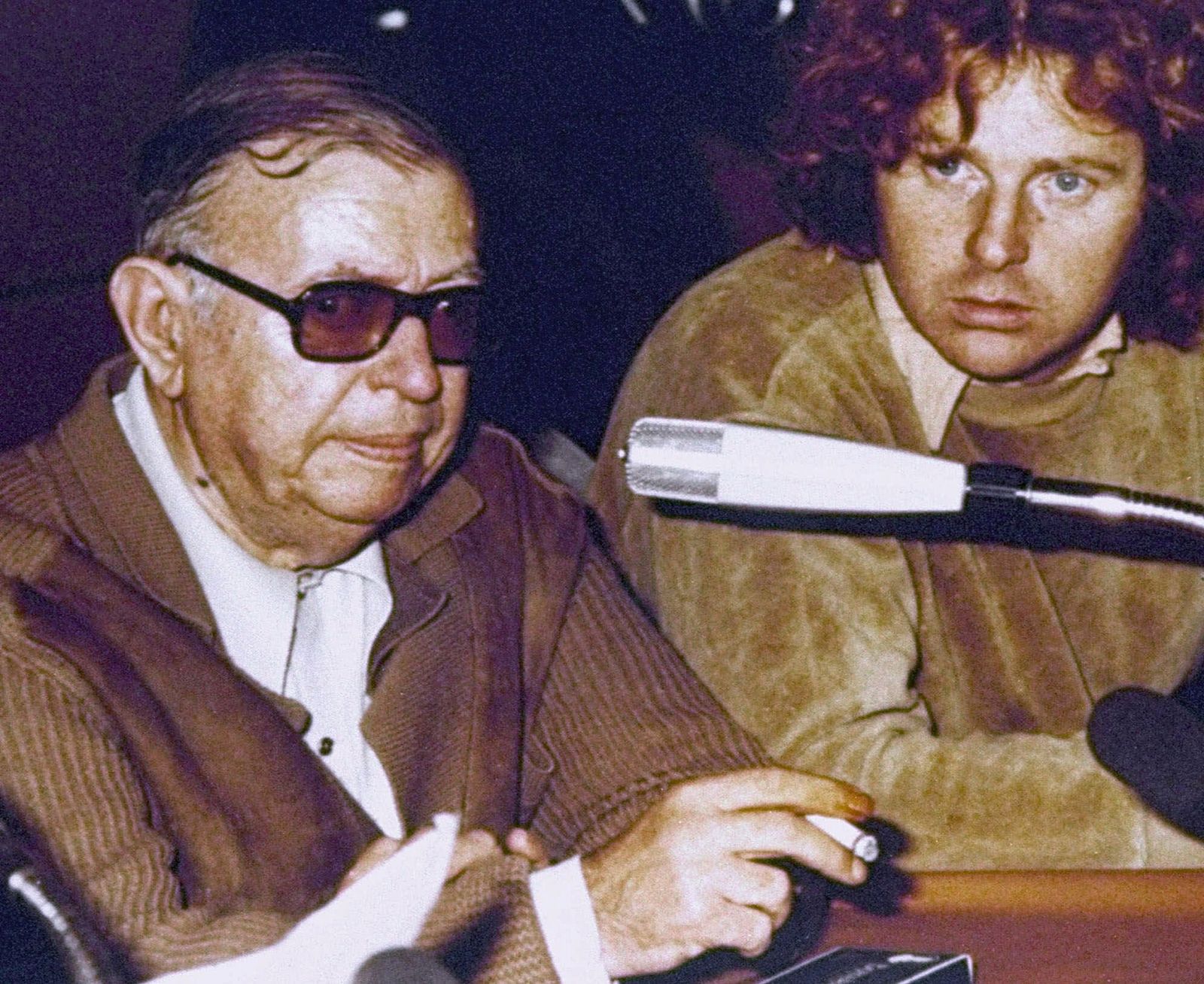 Jean-Paul Sartre after his visit with Andreas Baader in 1974: The appearance was heavily criticized.