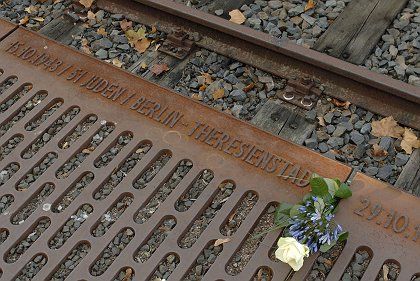 A rose lies on the "Platform 17" monument outside Berlin to the Jews taken to the concentration camps by rail.

A unique traveling train-mounted Holocaust exhibition will leave Frankfurt railway station Friday and begin its six-month-long journey through Germany to Auschwitz in Poland. The exhibit commemorates the fate of the estimated 1.5 million children and youth who were rounded up between 1940 and 1944 and transported by the former Reichsbahn to the concentration camps.

The so-called "Train of Commemoration" is made up of a vintage 1921 locomotive and four train cars holding commemorative items, such as maps, chronologies, letters, laws and regulations, and other official documents related to the railway's role in transporting children from across Europe to their deaths. It will stop in over 30 cities as it winds along its 3,000-kilometer (1,864-mile) route through mostly southern German towns.

The exhibition aims to commemorate the young Jewish, Sinti and Roma victims of the Nazis from Germany, Norway, Belgium, the Netherlands, France, Italy, Greece, Poland and the former Soviet Union. It also aims to honor the aid organizations that helped save children from falling victim to the Nazis.

"Trains were the decisive means of transportation for carrying people to the concentration camps and the ghettos," Hans-Rüdiger Minow, head of the private initiative that organized the exhibition, told reporters at a press conference Thursday. "And it was only in the train stations that other people witnessed the fate of the deported at that time at all." 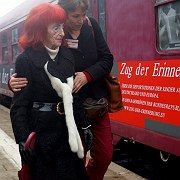 Margot Kleinberger, left, was deported by rail to a concentration camp when she was 11. "Almost no one survived the camps where they took us."

According to the exhibition's organizers, 12,089 German Jewish children were rounded up and carried by rail to the extermination camps. "After we were persecuted everywhere on the streets for being Jews, we thought that the trains would take us to a better place," 76-year-old Margot Kleinberger, who was 11 years old when she was deported from Hanover, told reporters Thursday. "But almost no one survived the camps where they took us."

The train's stops will be used both to display the exhibition materials and to collect more photos, archival material and oral testimony. The organizers said in a press release they would also encourage people to "search for traces of the deported children in their towns." The children's ordeal "has remained nearly unnoticed by the German public," the organizers write, adding that the exhibition "is also a warning against the return of racist hatred, right-wing extremism and national megalomania."

The train is scheduled to end its journey at the Auschwitz Memorial, near the present day town of Oswiecim in Poland, on May 8, the anniversary of the end of World War II in Europe.

The question of how to commemorate the role of the German railway system in the Holocaust sparked controversy in October 2006. At the time, Germany's Transport Minister Wolfgang Tiefensee wanted to show an exhibition organized by well-known anti-Nazi campaigner Beate Klarsfeld in the country's railway stations. The exhibition, entitled "11,000 Jewish Children: With the Reichsbahn to Death," had already been successfully shown in a number of French railway stations.

But the head of Deutsche Bahn, Germany's state-owned national railway, Hartmut Mehdorn, refused to allow the exhibit in train stations, citing financial, organizational and technical reasons. "The subject is far too serious for people to engage with it while chewing on a sandwich and rushing to catch a train," Mehdorn told reporters at the time.

The dispute ended last December when an agreement was reached to have an exhibition in German train stations and the Deutsche Bahn's museum in Nuremberg. That exhibition, which is not related to the 'Train of Commemoration,' is set to open on Jan. 27, 2008, to mark the anniversary of the liberation of Auschwitz in 1945.