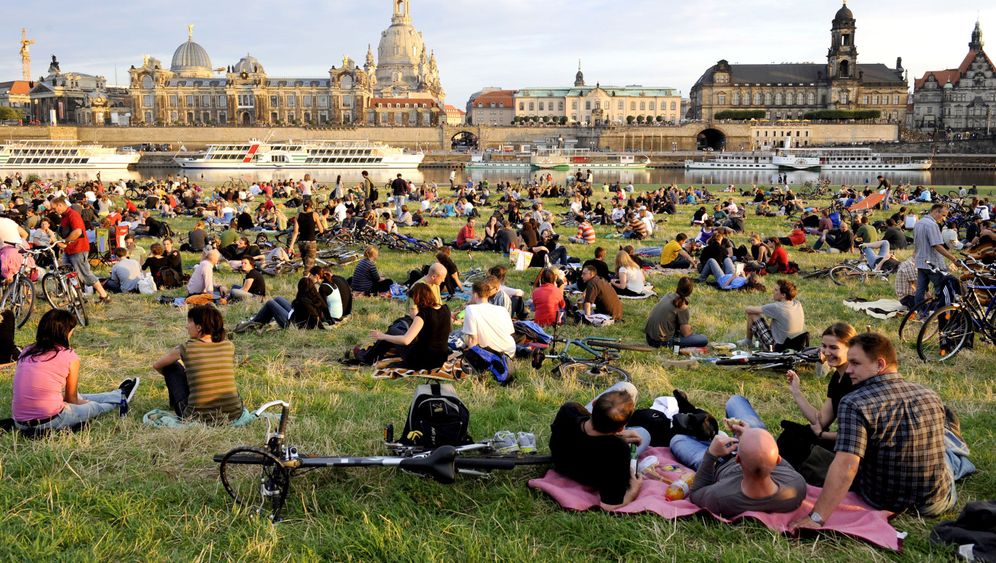 At first glance, it seems like a step down. Sebastian Müller, who was working as an engineer for the German carmaker Audi in 2010, had an apartment in Munich and an annual salary of €56,000 ($75,000), has moved back east, to the Oberlausitz region, where he now works for an automotive supplier. He earns less, he's far away from any professional football matches, and instead of going to plays at the Bavarian State Theater in Munich, he must now make do with puppet shows.

But Müller, 30, went east of his own accord. He packed his bags and moved back to the place he had fled as a student.

Müller found his current job, at Miunske GmbH in the town of Grosspostwitz, through an online ad for returnees posted on the website of the state of Saxony's Chamber of Industry and Commerce. "I'm more satisfied than I ever was in western Germany," he says.

'The Wrong Place for Me'

For a long time, migration in Germany primarily moved in one direction: from the former communist east to the more prosperous west. Former East Germany, referred to as the "new German states" since reunification, have lost almost 2 million people to the old states since 1990. But the trend, at least in some regions, is beginning to reverse itself. Eastern Germans are going back home. Last year, for the first time since 1997, more people moved to Saxony than away from the state. Berlin and Brandenburg are also reporting positive net-migration rates. And although Thuringia is still losing more residents than it gains, it reports that more people moved to the state in 2011 than at any time in the past 15 years.

It's no longer just students fleeing high tuitions who are moving east, or western German retirees investing their savings in eastern German real estate. Returnees form by far the largest group of migrants. According to calculations by the German Institute for Economic Research (DIW Berlin), they make up about half of the migrants moving from west to east. "We have noticed a strong tendency to return," says Alexander Kubis of the Nuremberg-based Institute for Employment Research (IAB).

The motives vary. In Sebastian Müller's case, it was homesickness. Throughout his entire education, his goal was to have a career in the west, and he was already applying for internships in Bavaria while studying at the Zwickau University of Applied Sciences. After graduating in the fall of 2007, he quickly found his dream job at Audi in Ingolstadt, near Munich.

But he soon realized that the west wasn't what he had imagined. His girlfriend had moved with him and had also found a job in Munich, but the rent for the apartment in the Bavarian capital ate up almost his entire salary. He had trouble making friends in the new city, and he also felt lost in the crowd at work. When Müller went home for family events, he was surprised to see how much had changed. There was new construction, and there were new jobs. "I suddenly had the feeling that Munich was the wrong place for me," he says.

Müller probably wouldn't have felt this way had it not been for economic progress in the east. Saxony and Thuringia saw the largest drops in unemployment among Germany's 16 states last year, and unemployment has also gone down in the northeastern states of Mecklenburg-Western Pomerania, Berlin and Brandenburg. Of course, these statistics are always relative, given that more than twice as many people are unemployed in the east as in the west. But, in Saxony, job density is already higher than in the western states of Lower Saxony and Rhineland-Palatinate.

Only a few years ago, the new states maintained agencies to promote emigration, fearing that having too many people would only lead to higher unemployment. At the time, the eastern states felt they could shrink their way to economic health. Today, specialists are in demand there, and companies are courting job applicants. "Nowadays, no one is forced to leave our state in search of a trainee position," says Brandenburg Governor Matthias Platzeck.

The so-called "dynamic ranking" of the New Social Market Economy Initiative, which tracks changes in key economic figures between 2006 and 2010, places all of the new states in its top slots. Structural crises -- such as the recent bankruptcy of the solar company Q-Cells -- have dealt setbacks to some towns and regions. But Ulrich Blum, an economics professor at the University of Halle, still expects positive developments to continue, and he estimates that, by 2020, the economic strength of eastern Germany will have reached 90 percent of the western level. German Defense Minister Thomas de Maizière, whose electoral district is in Meissen, Saxony, is already touting the east's "small economic miracle."

Still, the economic recovery and improvements in the labor market alone cannot explain the trend of people moving back east. Joachim Ragnitz, the managing director of the Dresden branch of the Ifo economics institute, believes that disillusionment with the west is at least as important as the revival of the east. Although average incomes in the west are still up to 25 percent higher than in the east, the difference shrinks when one factors in rents and the cost of living. When eastern Germans go home, it's also the result of dashed hopes.

What's more, some of the cities they are returning to are beginning to hold their own against the west. In terms of economic development, eastern German cities like Jena and Dresden have already surged past some of their heavily debt-ridden western counterparts, such as Bremen and Duisburg. And the fact that so many historic centers in the east have been attractively restored has undoubtedly played a role in prompting various mayors in the western state of North Rhine-Westphalia to launch a fresh debate over the Solidarity Pact, which has seen the west send tens of billions in transfer payments to the east since reunification to help build up the economy and infrastructure.

Kubis, the IAB economist, has calculated that two-thirds of those who migrated away from the eastern states are thinking about returning home. Many have always wanted the return home, adds Anke Matuschewski, a professor of economic geography at the University of Bayreuth, who interviewed returnees from Saxony and Mecklenburg-Western Pomerania as part of a research project. But, she finds, they only seriously consider moving back east once economic conditions there have improved.

Matuschewski has tried to detect patterns in the migration from west to east. According to her surveys, the typical returnee is a man between the ages of 30 and 35. He now lives in cities like Jena or Leipzig, which are benefiting from the influx while the rural population continues to shrink. The typical returnee has already completed his education and job training and embarked on a career, working as a specialist in a small or mid-sized company or doing research at a university.

Other studies also debunk the stereotype that the people moving back east are primarily those who have failed to make it in the west. In fact, an above-average number of university graduates are willing to return home to the east.

These include people like Jens Thiele, who is originally from Saxony and worked for the Pfizer pharmaceutical company in the southwestern city of Freiburg for eight years before moving to Dresden last summer. The 34-year-old process engineer says he was eager for new challenges, and that the east felt more dynamic to him than the west. Thiele got a job with GlaxoSmithKline, a Pfizer competitor.

Eastern German governors, such as Saxony's Stanislaw Tillich, view the trend reversal as the result of their successful policies. "We have created modern, sustainable economic structures in recent years," Tillich says, adding that Saxony appeals to people from all over Germany.

"People in the east are orienting themselves toward the future," says Jena-based software specialist Dirk Weckerlei, 31, who moved back to Thuringia in 2009 after spending two years in the northwestern city of Osnabrück, partly to be closer to his family.

Yet another characteristic of the typical returnee is that he aims for a profession that is compatible with his personal life, and he's willing to accept less income in return. There are also many young families among the west-to-east migrants. They value the wide range of opportunities for children in the east, where it's also easier to find day care slots.

'You're Needed at Home'

Returnees are valuable to eastern German companies. They alleviate the shortage of specialists, know the region and the mentality of the people there, and have also gathered work experience in the western states. Johannes Miunske, the owner of the automotive supplier that hired Müller, the former Audi engineer, had specified in his online ad that he was looking for engineers who were originally from eastern Germany. "As a mid-sized company in Saxony, we cannot fulfill the salary expectations of westerners," he says, and he knows that returnees have ties to the region and will not go off looking for a new job after just a few years.

Politicians have also recognized the potential in the lost sons and daughters of the east. All new states maintain or support returnee agencies, some of which have names like "Saxon Come Home" or "MV4YOU" in Mecklenburg-Western Pomerania. In the coming years, these initiatives will be critical to the survival of the new states, says Hans-Liudger Dienel, the managing director of the Center for Technology and Society at the Technical University of Berlin. It's the only way they can hold their own in the nationwide competition for specialists.

Some of the recruitment efforts are admittedly a bit odd. For instance, the city of Magdeburg sent "home boxes" of local crisp bread to 1,000 people throughout Germany who had left the region. Last year, Sven Morlock, the economics minister of Saxony, handed out free cake to commuters at a highway rest stop.

Saxony-Anhalt Governor Reiner Haseloff recently embarked on a tour of western Germany. In mid-April, he hosted a get-together at a restaurant in Stuttgart, where he lavished flyers, key chains and coffee mugs on a dozen former residents of his state. Haseloff eagerly made the rounds, raving about the jobs being created in Saxony-Anhalt. "You're needed at home," he said. "We haven't forgotten you."

Haseloff felt that the evening was a success. He plans to travel to North Rhine-Westphalia next.