In its press release on Wednesday, Germany's Federal Constitutional Court said that the petitions for the issue of temporary injunctions that would block the ratification of the European Stability Mechanism (ESM) had been "unsuccessful for the most part." But "for the most part" does not mean "entirely". Indeed, in the aftermath of the ruling, the roles of winners and losers are not as clear as they may have seemed at first glance.

It would, of course, be going too far to say that the verbal lapse of court President Andreas Vosskuhle was a Freudian slip. Right in the first sentence of the text of the ruling, Vosskuhle involuntarily caused a wave of laughter when he said that the petitions were "for the most part well-founded" -- which would have meant that the plaintiffs had won. Vosskuhle corrected himself with a laugh, saying that the petitions were actually "unfounded."

But the slip of the tongue reflects a deeper truth. Nobody seriously believed that the plaintiffs, led by the stubborn conservative Bavarian politician Peter Gauweiler, would win an outright victory. But the court's ruling contains a number of details that could cast a shadow over the winning side's victory, and possibly grant a not insignificant triumph to the other side -- which is why Gauweiler himself spoke of a "huge success."

That applies to the reservations that the Karlsruhe-based court has now set as conditions for the ratification of the ESM by Germany.

The question of how exactly these legal declarations are supposed to be implemented is likely to cause headaches among legal experts in the German government and the president's office. Berlin-based lawyer Ulrich Karpenstein, one of the experts involved in the background in the legal proceedings, says that a unilateral interpretative declaration on these points which "authorizes a withdrawal from the ESM treaty only in the event of a serious violation" would be enough.

But it is doubtful whether this right to withdraw from the treaty, which would apply exclusively in the event of a serious violation, is really enough to satisfy the provisions that the Constitutional Court has laid down. In the ruling, the court says that Germany "must express clearly that it does not wish to be bound by the ESM Treaty in its entirety if the reservations made by it should prove to be ineffective."

According to the German parliament's attorney of record, Martin Nettesheim, this means that the German government must affix a formal reservation under international law and, at the very minimum, must inform and solicit a response from the other euro-zone member states and provide them with a reasonable deadline within which to enter any objections.

It's possible that, and this is one of the delicate issues, given the character of the ESM, the silence of the other member states would not be sufficient. They might have to officially accept these reservations. That would mean that the treaty would only be ratified in Germany once all had agreed -- or if it hadn't heard from the other states within a 12-month period. Nettesheim said he didn't believe the other countries would "take a stand against these points." If they did, though, "we would have a major problem." In any case, one thing is certain: It won't happen slapdash, either, because the other member states have to be given sufficient time to consider Germany's reservations.

'ESM Will Be Sufficient for Ireland and Cyprus, But Not Spain Or Italy'

Meanwhile, the statements made by the Constitutional Court about the European Central Bank (ECB) are already making supporters of a permanent bailout fund with sharper teeth nervous. Volker Beck, a legal affairs expert with the Green Party in parliament, said he found "irritating" what the court had said about the relationship between the ECB and the ESM.

The Karlsruhe ruling explicitly states that the ESM cannot "become a vehicle of unconstitutional state financing by the European Central Bank." The Constitutional Court's interpretation of the ESM treaty itself is that it stipulates that the permanent euro bailout fund can only borrow money on capital markets and not from the ECB. Under the clear guidelines provided by EU law, the justices said the ESM treaty could only be interpreted to mean that "borrowing operations" with the ECB are "not permitted."

That's why Beck fears that the ESM will be robbed of "part of its possibilities for taking action," because it would not have the ability to "increase its firepower" through borrowing from the ECB.

But it is precisely this limitation that has attracted praise from the petitioners in the case. Christoph Degenhart, a Leipzig-based constitutional law professor who represented the more than 37,000 people who had joined together under the group Mehr Demokratie, or "More Democracy," to file the constitutional complaint, said he "wasn't entirely unsatisfied" with the ruling. "The main goals have been reached."

The attorney said the Constitutional Court had demanded the necessary reservations. Additionally, it had interpreted the treaty in so-called conformity with the constitution and thus rendered the ESM "hardly manageable any more," particularly in relation to the ECB. "The ESM will still be sufficient for Ireland or Cyprus, but no longer for Spain or Italy," he said.

Besides, the current ruling is just a preliminary one. The justices have limited their detailed remarks to the points raised through the ratification of the ESM and the fiscal pact that accompanies it. The justices have also noted explicitly that they will also review the role of the ECB more precisely during the main proceedings about the issue still to come, which necessarily will follow, and that this will include closer scrutiny of the question of whether the ECB's bond purchases go beyond what is currently permitted under the EU treaties.

For his part, Degenhart feels certain that "further limitations will be imposed." The fact that the Constitutional Court justices have a need for clarification on several issues and that they consider those issues to be urgent, suggests this will actually happen: The court has said that it already plans to hear further oral arguments this fall. 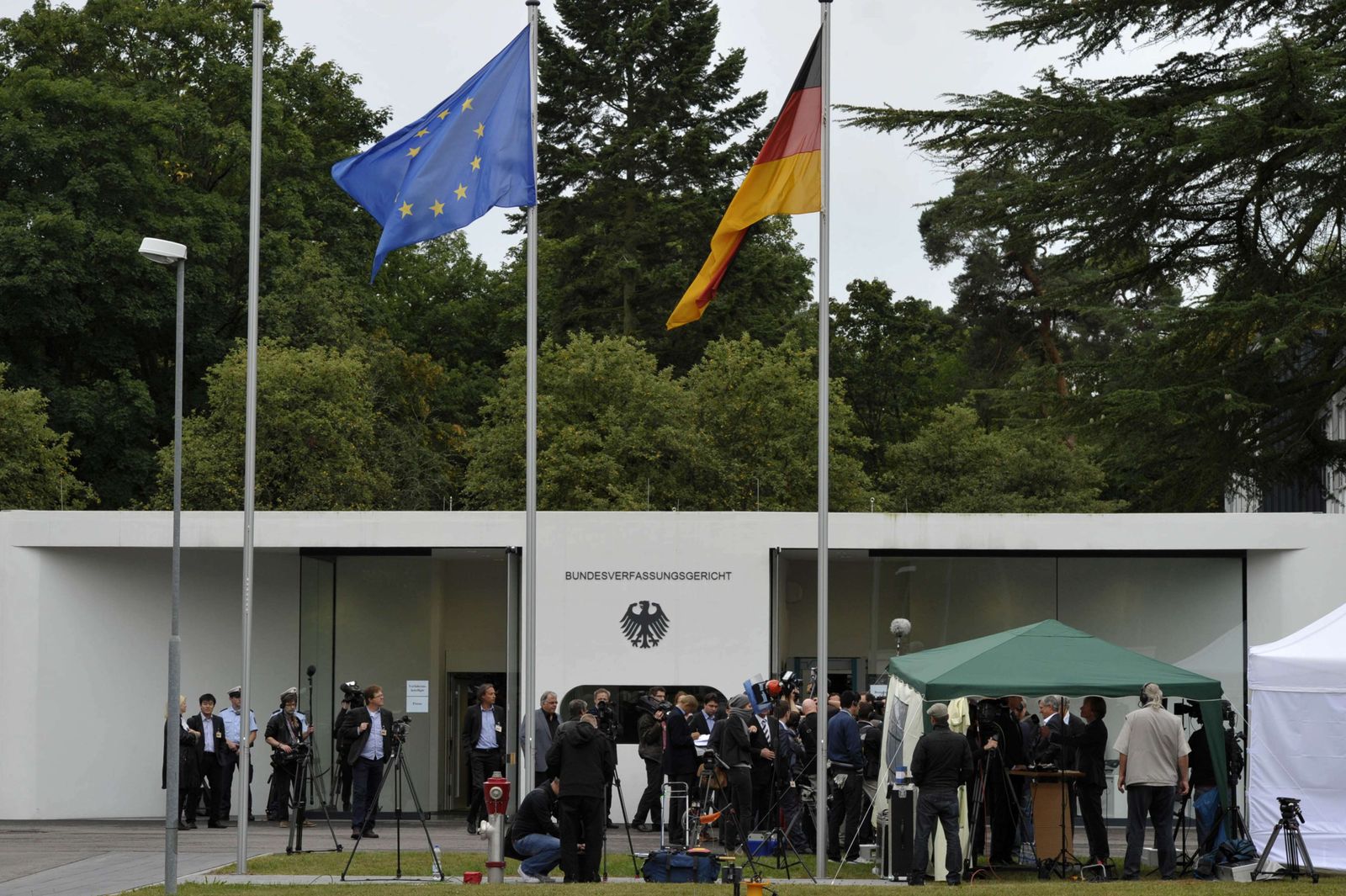 Media gather in front of Germany's Constitutional Court in Karlsruhe on Wednesday: The court will next consider the ECB's bond-buying program.