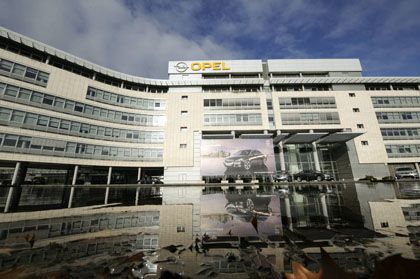 General Motors Europe said on Wednesday it was prepared to discuss partnerships or outside investment for its Opel unit as pressure mounted on the government in Berlin to help rescue the German brand.

But Chancellor Angela Merkel said Opel must first present a clear restructuring plan before her government can consider giving assistance.

GM Europe's United States parent company on Tuesday night announced plans to reduce its global workforce by 47,000 jobs this year and to cut five additional American plants by 2012. It also said it needed up to $30 billion in government aid and that it would run out of cash as soon as March unless it gets fresh state funds.

It has yet to give details about how its cutbacks will affect its European operations -- Opel in Germany, Vauxhall in Britain and Saab in Sweden -- but Opel fears mass redundancies and plant closures. The German company employs some 26,000 workers at four plants in Rüsselsheim, Bochum, Kaiserslautern and Eisenach.

Management and labor representatives at Opel and GM Europe now plan to present their own restructuring plan, and they want to keep all options open -- including a partial sale of Opel.

"If it makes sense for the sustainable success of GM Europe and Opel, the management is also prepared to talk to third parties about partnerhips and participations," management and trade unions said in a joint statement.

Given the crisis in the European auto market, it was necessary to put the European business of GM on a healthy financial footing, the statement said.

"Management and labor representatives will immediately commence talks about such a restructuring to clarify how forced redundancies and plant closures can be avoided," it said.

"Both sides -- employees and management of GM Europe and Opel -- are of the firm opinion that Opel, as the core brand of the European GM business with a successful model policy, has a good future provided that the necessary financial framework can be created," the statement added.

Merkel urged Opel and GM on Wednesday to come up with a restructuring plan to ensure the future of the German Opel plants. "The task we now face is a task that Opel has to perform together with the parent company General Motors," Merkel said.

When the plan was ready, "Opel will come back to us and say what conclusions arise from that," Merkel said. A German government spokesman said a plan was expected in the coming weeks.

Meanwhile, German Finance Minister Peer Steinbrück said he was skeptical about the government taking a stake in Opel. German regional governments had raised the possibility of a stake purchase if Opel could be spun off from its troubled parent GM.

But Steinbrück added that the government could not refuse to consider providing aid if the fate of tens of thousands of workers was at stake.