It was really nothing more than a test. Sigmar Gabriel was standing at the lectern inside the Bayerischer Hof hotel in Munich for his first appearance at the Munich Security Conference in his new role as German foreign minister. And he looked terrible. He was sick and had cancelled many of his appointments, but nevertheless decided not to forego his speech and the Security Conference. He wanted to toss a fly into the NATO soup.

That morning, U.S. Vice President Mike Pence had spoken from the same stage and had used the spotlight to urge NATO member states to fulfil their alliance obligations as agreed and spend the equivalent of at least 2 percent of their GDPs on defense. Germany was one of his primary targets. The country is the clear economic leader in Europe, but Berlin only spends 1.2 percent of its GDP on the military, less even in absolute terms than the United Kingdom, France and a host of other European countries.

Gabriel was well aware of all that, but he said: "We have to be a bit careful here that we don't over-interpret the 2 percent target." He then became much clearer: "Maintain perspective, stay focused on the target, but avoid being consumed by the bliss of a new rearmament spiral!" That was the decisive phrase: Rearmament spiral.

Following the careful test balloon launched in Munich, Gabriel dripped a bit more oil into the fire a few days later, warning of "blind obedience" to the U.S. He also took a dig at his cabinet colleague Defense Minister Ursula von der Leyen, saying that she apparently had a rather "naïve" notion regarding what was possible in Germany.

Just a few weeks after the inauguration of U.S. President Donald Trump, the debate over military spending has reached the depths of the accelerating German election campaign. Trump himself triggered the debate, having declared several times that NATO is "obsolete" and hinting that the U.S. would make its loyalties dependent on member states paying their fair share.

Ever since the real-estate tycoon's adversarial speeches in New York, the trans-Atlantic alliance has found itself in a crisis of trust. But for Gabriel, the issue opens up a world of possibilities.

Gabriel, after all, is not just foreign minister. He is also the erstwhile head of the center-left Social Democrats (SPD). Since the party chose former European Parliament president Martin Schulz as its chancellor candidate a few weeks ago, the party has been revitalized and, after more than a decade of doldrums, finally believes it has a realistic chance of unseating Chancellor Angela Merkel in the September general election.

Gabriel is now using the battle over increased defense spending as a symbol of resistance against the unpopular President Trump, a man who most German voters view with a significant distrust. For the SPD, the debate has great potential: the enemy is clear and, at its core, the debate is about morals and values. It also has the advantage that it pushes Merkel's conservatives into the Trump camp and puts them in the uncomfortable position of having to insist on spending more money on arms, which has never been politically palatable for a broad swath of the electorate.

The debate has now become so potent that it has slowly begun losing all connection to reality. The actual needs of the German military, the Bundeswehr, hardly play any role at all. Which means the question as to what it would actually mean were 2 percent of GDP invested in the military has gone unanswered. Would it really be a "rearmament spiral" as Gabriel would have it?

The best overview of the state of the German military is provided once a year in a report submitted by Armed Forces Commissioner Hans-Peter Bartels. As an SPD member of parliament for many years, Bartels is a credible voice from the perspective of the Social Democrats. And the image that he paints of the Bundeswehr is dark indeed.

One year ago, he described how the Saxony-based 371st tank battalion, prior to taking on its role as "spearhead" of the NATO Response Force, had to borrow 15,000 pieces of equipment from 56 other German military units. In another example, the 345th artillery training battalion, based just west of Frankfurt, was officially supposed to have 24 armored artillery vehicles at its disposal. In reality, though, it had just seven, of which six were on standby for NATO and could not be used. And the seventh was in reserve for the six on standby. Troops reported to Bartels that they hadn't been able to carry out training exercises at the site for the last three years.

There is an endless list of such examples: A mountain infantry unit had only 96 pairs of night-vision goggles available instead of the 522 it had been allotted -- of which 76 had to be loaned out to other units. Which meant they only had 20, of which 17 were damaged.

The lack of equipment, Bartels wrote in his most recent report, has led to a system of sharing by necessity. "It is often the case, with Navy units that are returning from a mission, for example, that as soon as they dock in their homeport, pieces of equipment are immediately dismounted from ships and then remounted on those vessels heading out to replace them, such as (radar devices). The components wear out much more quickly due to the frequent mounting and dismounting, such that the process becomes self-reinforcing."

One can imagine the Bundeswehr as a fire department which, due to a lack of money, has no hoses, too few helmets, hardly any ladder trucks and no oxygen masks. But the department isn't eliminated entirely just in case a fire breaks out.

Following cabinet consultations back in 2010, then-Defense Minister Karl-Theodor zu Guttenberg of the CSU, the Bavarian sister party of Merkel's CDU, rejoiced at the government's decision to cut 8.3 billion euros from the defense budget by 2014, referring to it as a "unique opportunity" for "realignment." The German military still hasn't recovered.

The military had already shrunk in the two decades since the end of the Cold War, from more than half a million soldiers to just 205,000 in 2011. The number of Leopard 2 battle tanks at the Bundeswehr's disposal likewise plunged during that same time period, from 2,000 to 225. The additional cuts announced by Guttenberg, largely a consequence of the financial crisis, were a step too far. "The national goal of budget consolidation," Guttenberg said at the time, "is the most important strategic parameter" for the reorganization of the German military.

A Stream of New Euphemisms

In the future, the structures weren't going to determined spending needs, but spending needs were going to determine the structures. Classic areas of concern, such as alliance and national defense needs, were no longer seen as central. Operations overseas became the priority, determining personnel, materiel and munitions needs. NATO's eastern flank was still at peace and, according to the logic of the time, since the boys were in Afghanistan anyway, not as many tanks were needed at home.

The Defense Ministry invented a constant stream of new euphemisms to describe the measures taken to deal with the deficiencies. "Dynamic Availability Management," for example, shortened to the acronym DynVM, was used to describe a situation when one unit had to borrow tanks from another for exercises. And when just three surveillance drones were acquired instead of the 20 necessary, it was termed "minimum contribution."

Erhard Bühler still shudders when he is forced to use such terms. As commander of the 10th tank division, he was an immediate victim of the budget cuts. He was told by Berlin one morning that his base was slated for closure and had to give a press conference at noon, still largely in the dark about what was happening.

The lieutenant general is now head of the planning division in the Defense Ministry and thus responsible for the future constellation of the German military. In addition to the German flag, a large oil painting of Prussian King Frederick the Great hangs on the wall behind his desk. He continually pulls graphics out of a file folder showing the decline of the Bundeswehr.

The consequences of Guttenberg's "realignment," the graphics make clear, are hollow structures and a military that is slowly wearing out. There is a huge need for new, modern equipment. According to protocol, the army is supposed to have at least 70 percent of large pieces of equipment, such as tanks and armored vehicles, available during operations. In reality, though, it is often much less than that. Other systems, such as night-vision goggles, are often missing completely.

Bühler's colorful graphics make it clear how the 2010 budget cuts made it impossible for several years to pursue badly needed modernization efforts. Now, it will take several more years before that technology can be delivered to the troops.

With much to-do, Defense Minister von der Leyen has since announced several "trend reversals," according to which the Bundeswehr is turning its back on Guttenberg's focus on overseas operations. In the future, national and alliance defense will once again determine structures within the German military. Russian aggression has led to a reinterpretation of the threat levels on NATO's eastern flank.

Since the seminal Harmel Report in 1967, compiled for NATO by the Belgian Foreign Minister Pierre Harmel, the alliance has viewed effective deterrence as an important partner alongside dialogue and negotiation. Security and the reduction of tensions are not contradictory, the philosophy holds, rather the one is dependent on the other. As such, rapprochement with Russia will only be possible if Moscow takes European military strength seriously. That becomes even more important if the U.S. under Trump withdraws from Europe.

After years of falling, the German defense budget is now climbing again. This year it is slated to rise by 8 percent to 37 billion euros. But even if Germany were to increase its budget to between 65 million and 75 million euros by 2024, thus fulfilling its 2 percent commitment, it would be far from being a "rearmament spiral." Rather, it would serve to complete the necessary modernization of the German military. It would fill up the hollow structures of today.

Bühler is following the political debate carefully. In his graphics, the lines for the next budget year and thereafter are dotted and drawn in red. And they come to an end in 2021 -- at 1.5 percent. 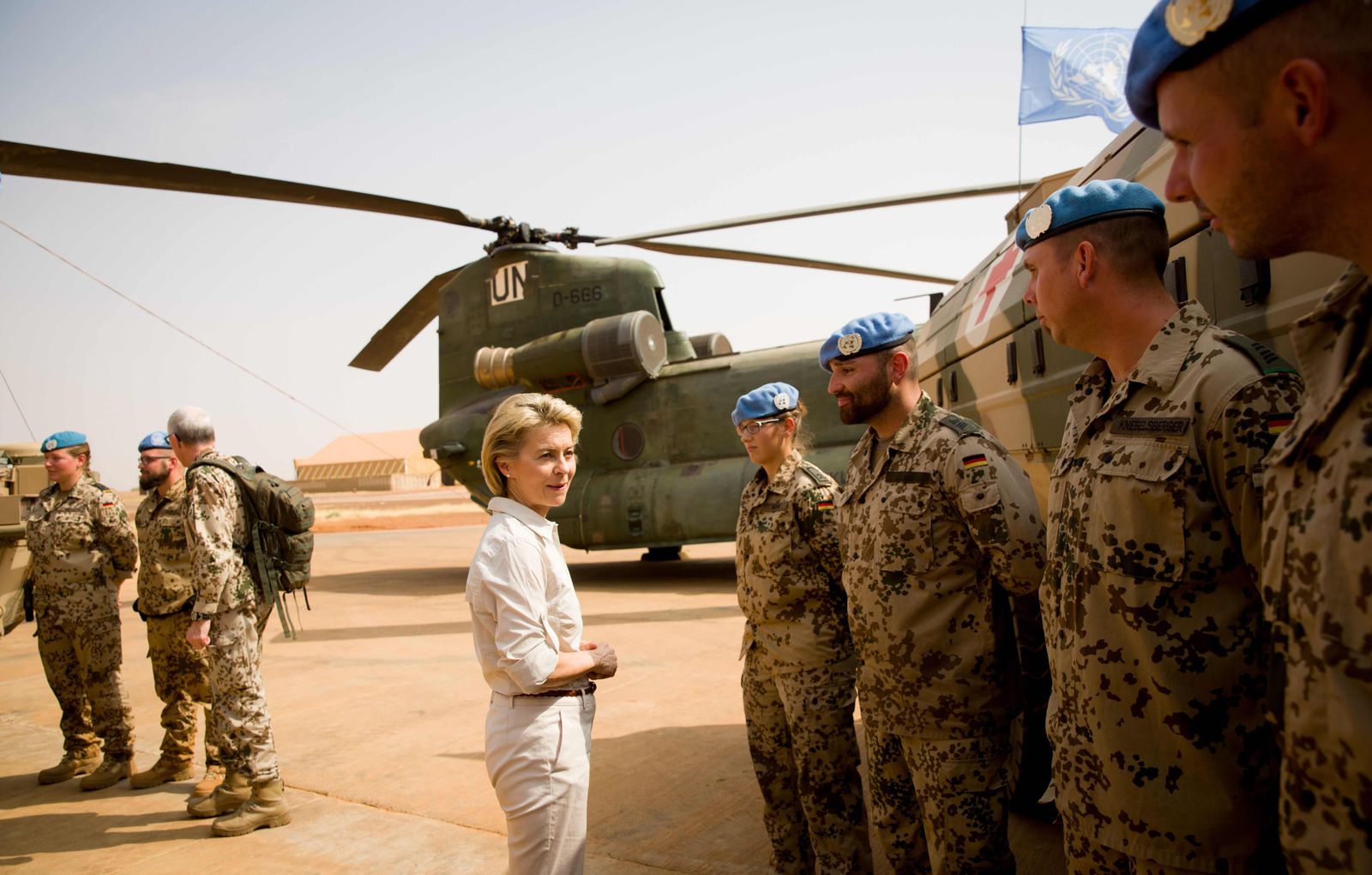